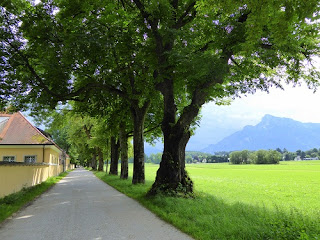 Not its real name, and if it were I doubt if it could compete with the Stefan-Zweig-Weg on Salzburg's Capuzinerberg for sheer historic resonance (more on that in a future post). But the Hellbrunner Allee is an even more beautiful slice of rus in urbe and leads to one of Austria's great gardens.

I saw it on the map as I was looking at where exactly my perfectly comfortable hotel (of the award-winning chain of Motel Ones, if anyone's interested in finding decent mid-price accommodation around Germany and Austria) happened to be situated in Salzburg-Sud. A walk to Prince Archbishop Marcus Sitticus's summer palace 4km from the town centre would be the perfect morning excursion between performances of Strauss's Die Liebe der Danae and Ades's The Exterminating Angel. What I hadn't bargained for was turning left into a road alongside a park and finding this, the Frohnburg Palace, at the end of it. 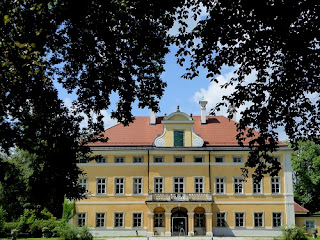 Looked familiar; and the answer came from the trail of cyclists, very Von Trapp family on excursion, I saw as I took the small road around the building to the Allee. 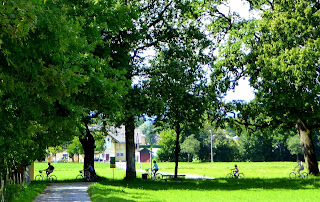 There they were at the front gate, being lectured by a rather amusing and certainly very well clued-up guide on the exact details of Julie Andrew's Maria's arrival at Baron von Trapp's mansion, including where she tripped up ('and some of you may like to enact that trip on film when I've finished'). Strains of someone practising the finale of Beethoven's 'Hammerklavier' Sonata came from the building by the gate; the building is owned by the University's Mozarteum. 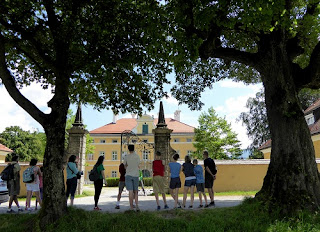 As many of us already knew, the back of the villa in the film with its lake in which Maria and the children capsize with surprise at the Baron's return is elsewhere (the Leopoldskron Palace, which I saw on the somewhat wayward, traffic-avoiding taxi ride from the airport). Salzburgers didn't like this pick-and-mixing but it's standard practice in the movies.

Anyway, the Frohnburg Palace is splendid in its own right, originally built between 1660 and 1680 for Prince Archbishop Max Gandolf. 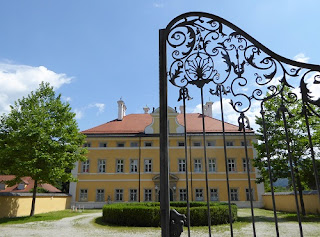 It makes do with a simple fountain rather than a lake on the garden side. 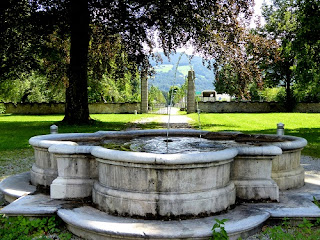 Now, having been brought up on one of the best films ever - for Robert Wise's The Sound of Music would be in the art-house category if it didn't have all those cheesy-wonderful songs - I don't begrudge this at all. In fact the last time we visited Salzburg, out of festival time, I was very excited by the church and its cloister on the Nonnberg ('Maria's not an asset to the Abbey'). And I had to join the Salzburgers out cycling, dog-walking and strolling up and down the avenue and smile indulgently when the group got on their bikes and 'The Lonely Goatherd' came from a ghettoblaster in one of the baskets. 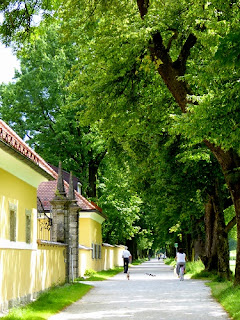 The great old moss-covered trees of the Allee are a real mix - chestnuts, oaks, alders among others - and some have religious 'icons' on them. 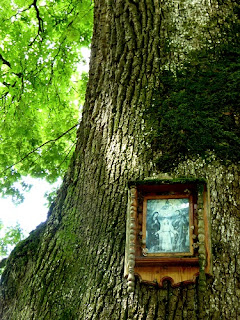 There are also a couple of independent shrines, pleasantly ivy-wreathed. 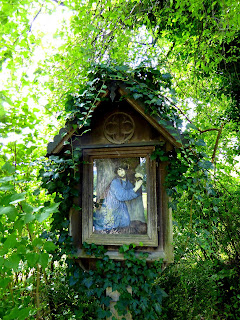 After a couple of kilometres you arrive at the gates of Schloss Hellbrunn, the pleasure palace of Marcus Sitticus von Hohenems (reg. 1612-19). It's famous for its Wasserspiel, the great play of fountains and water-powered clockwork figures. I postponed seeing them since the part of the garden open for free seemed very beautiful. First thing you see when you enter through the gate nearest the Hellbrunner Allee is another Sound of Music icon, the gazebo in which Liesl and Max strut their 'Sixteen Going on Seventeen' routine and the storm breaks. 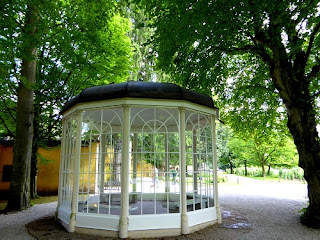 It had come into my head the previous evening, walking the long route back to the hotel after Danae, as it started to rain. None of that on this warm, dry day. What a public resource is the garden, with its splendid ponds and statuary. In one pond there are the expected koi carp, but I was taken aback to see giant sturgeon in another, between faun-tritons. 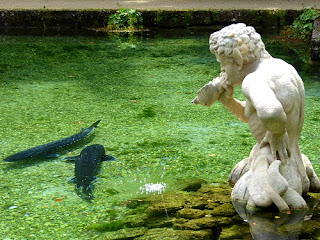 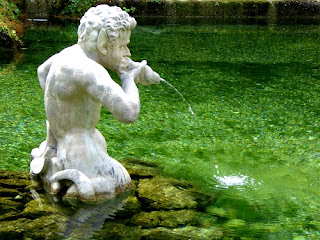 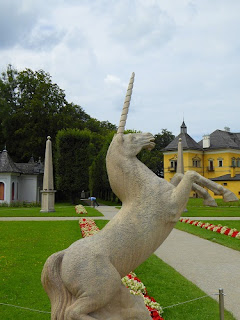 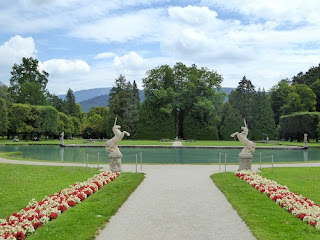 and you can get a glimpse of the grottos on the Wasserspiel trail. 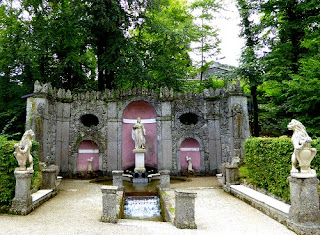 Seduced around 2pm by the Gasthaus in the palace courtyard, I lingered too long and found that the next tour (guided rituals only) wasn't for another half-hour. The rose-spritzer to accompany my Wiener goulash was too good not to enjoy, though. 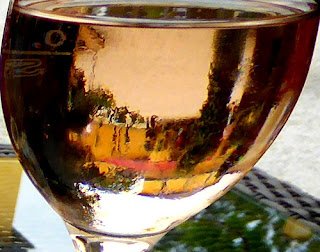 Given that I had an appointment in town with one of the Festival's most recent celebrities, I hoofed it back along the Allee to shower and change at Motel One. Black clouds were gathering over the mountains you see from the Allee, though no rain came of it. 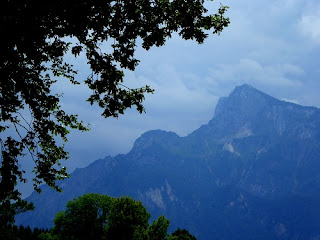 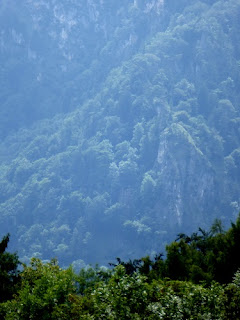 The next morning, I took the Allee in the opposite direction, north into town. 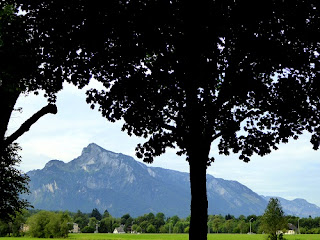 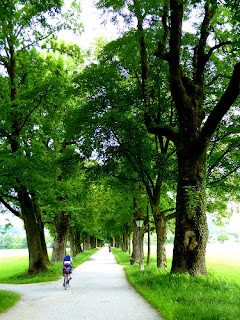 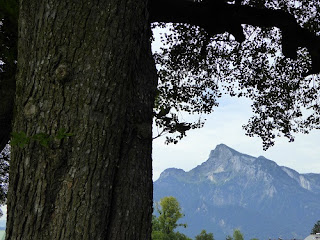 Some of the trees here have splendid fungal growth. Can't identify these two. 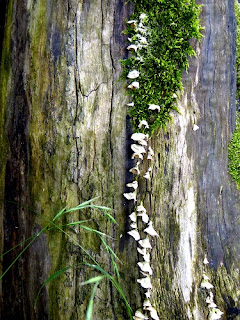 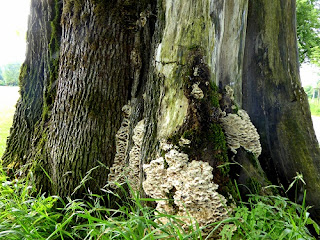 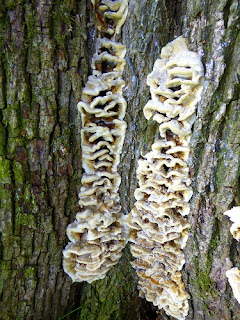 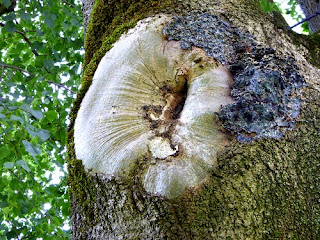 Where the Allee ends, over the other side of a busy road is a continuation of nature in the form of water meadows and ever closer views of the Hohensalzburg Fortress. 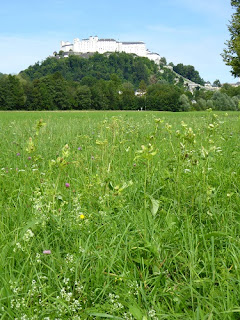 You end up with the Nonnberg beyond, 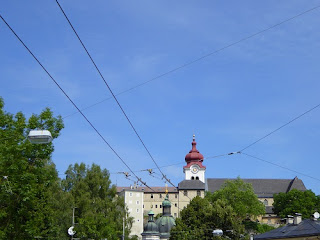 and so having left the busy Petersbrunstrasse, I found more wonders rounding the bottom of the hill and heading into town for coffee with the delightful Simone Dollmann at the Cafe Tomaselli. 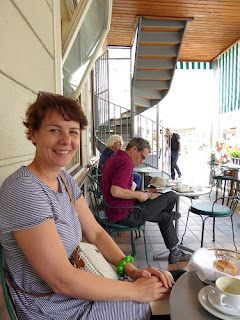 The hub deserves its reputation and probably has more locals sitting outside than tourists. More anon on the mixed blessings of Salzburg, but let's just say that it would be a fine place in which to grow up, with nature on the very doorstep, and of the grandest kind.
Posted by David at 10:00

Well david,youmakethis allee so magical. It will e high on my list of places to visit.
Very beautiful photos.

Thanks, Liam. It's the best kind of rus in urbe experience. And the Sound of Music tours kinda blend in with the general geniality of everyone - people on foot and on bikes, on horseback and with dogs - out enjoying the fresh air.

What I may love most about this post is the way you give us all open permission to be charmed. And how could we not be, with this wonderful report and photographs of the beautiful surroundings. And then, too, after all, how often does one hear "The Lonely Goatherd" from a ghetto blaster?

It's funny, isn't it, that to me the notion of Sound of Music tours isn't tacky - this is my heritage. I'm actually a bit cross that the Rough Guide refuses to condescend to mention the locations as such.

The Rough Guide can indeed get a bit snooty. They needn't be so worried. They'll never be mistake for Rick Steve . . .

We spent quite a few vacation time in Salzburg and always enjoyed the Festival. Though I enjoyed it more under Riccardo Muti then with the current director Ms Bartoli. It is a lovely town and so many nice things about it. Your picture brings back memories.

Yes, Laurent, I remember Will's reports. I feel very ambivalent about the main Salzburg Festival - maybe the Easter one isn't quite such a parade of wealth and facelifts... The town and environs are certainly exquisite, though.