By way of dark epilogue to the letter I posted here this morning, which seemed the very essence of clarity and sanity, I get the sense tonight that we've sleepwalked into the abyss. A sense compounded by finally - without thinking of any connection - settling down on a rare evening home alone to watch Luis Buñuel's The Exterminating Angel, which I've had sitting around ready to view since I saw Adès's opera on the subject in Salzburg.

And what do I see (what did I know I was going to see, without making the connection to begin with)? A group of well-heeled people - some sophisticated, some not - unable to leave a dinner-party for no apparent reason. Wearing themselves out and in some cases succumbing to death because of some inexplicable paralysis. 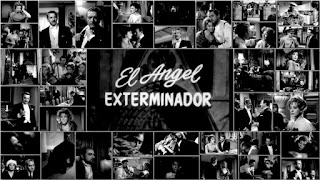 And then I think of the somnambulistic act of self harm in the Commons tonight and have to suspend viewing. Only 20 per cent of the Labour Party willing to stave off the biggest disaster the UK has faced in my lifetime? Once again, please note Andy Slaughter's observation in the previous post that this was 'the final chance to influence not just whether but on what terms the UK left the EU' And next I see that the insane American cabinet is making ultimatums to Iran that could lead to war in no time. We knew it in principle, but THERE IS NO DIPLOMACY in the White House. Sorry, but unless it's stopped, we're all f****d by this. (One brief, bitter laugh on the subject: did you know that primeval slime Steve Bannon once wanted to make a film of Shakespeare's Titus Andronicus set in outer space? What terrible thing happened to that creature and at what point in his life?)

How could it all have got so far? Is this the end? Time to go and sleep on it. It's just all too much right now. Tired of trying to rationalise it and to argue with the opposition - strangers, not friends. Withdrawal is once again the only option for keeping one's balance. However long it takes. Even clear and brilliant speakers like Ken Clarke talk of plunging down the rabbit hole. Well, let's leave his 17 minute speech here as a last throw of sanity. And then tomorrow is another day.


In the meantime, any wise or helpful words anyone else may have to offer on the subject - usually an invitation to silence - would be very welcome.

Update (2/2) - the next morning  Amazing what a good night's sleep can do. But I need to take my own advice, limit the time on LinkedIn, get more exercise (not easy when the weather's so dull and/or wet). Good quotation about self-preservation being part of the fight from Audre Lord among the ones here. And good ol' Peanuts has a fine philosophy too: 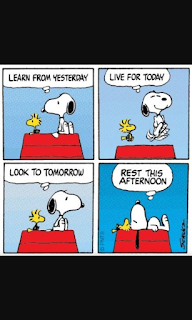 Well indeed the events are moving forward at a furious pace and one wonders what the future will bring. Many world leaders have expressed opinions that the clouds of war are gathering. What I am really worried about is Mr Bannon dark influence on Trump who may counsel a nuclear attack on Iran to settle scores. It appears no one understands in the White House what is happening or the danger for the world. I am also troubled deeply to see photos of the little 5 yr old child at the US airport in handcuff described by the Press spokesperson of Trump as a danger to national security, how did the USA descend into such an abyss. Trump appears unstoppable and the same for May in the UK. I wonder if it was like that in the Summer of 1939 or that of 1914 it seems the world simply slides into war as if it was the only way to go. Zweig wrote about the summer of 1914 how unbelievable it all was in his book.
Now the events in Quebec City against these poor people, how horrible but not surprising since the author of this crime, a young man, fed on separatist ideology of the Parti Quebecois and their ethnic identity propaganda. Which continued the very next day with the leader of the PQ, J.F. Lisée continuing to maintain that they asked for it. No one will stop him because he is a politician and party leader. It is as if the world has gone mad.

I cannot say that I am guiltless. I regard the views of UKIP, and people like Farage, as morally and intellectually wrong - and they would be beneath critical attention if they were not politically important. Ditto Trump. But the people who think like them feel it.....they feel that they are despised by the elite who embrace internationalism. who spend money on the developing nations rather than on the NHS, who want to open their arms to refugees who would not affect the lives of the elite ( except as servants) but who would in their view destroy ( especially for the elderly) the norms of life they have grown up with. So where is there any hope ? Mrs May has tried - her comments on this point are clear and good - but she does not have the charisma ( we need people like Macmillan who could point in one direction and move in the other) and her position is undermined by the elite who do not care for any policy except the right one and therefore attack her for any tendency to accommodate the views which have to be recognised ( and if possible finessed) in one way or another. I see little hope except that things do have cycles. As for Ken Clarke, if I may allowed a secondary point, he can make a speech. It used to be against the practice of the Commons to read a speech, except for ministerial pronouncements, but now it is quite usual

Morning, all! Feeling much better after a good night's sleep.

Yes, Laurent, I'm going to post about Harry Kessler's attempts at diplomacy in the 1920s - depressing reading because you know the way things are going, but he did at least envisage the basis for a united Europe. There was a very good article doing the rounds on the internet a year ago simply declaring that humanity has these periodic bouts of throwing itself off a cliff.

The handcuffed boy is obscene, but beware the picture if it's the one I've seen twice. It's not recent and it's of an autistic boy being handcuffed at a school. The opposition must be careful not to succumb to fake news or inaccurate reporting if it's to start winning the battle. Nevertheless the photo does show us that this sort of thing happens in America too often. And its very flawed legal system is partly responsible for the present mess.

Can't a hater politician be charged in Canada for that response? I think he would be in the UK.

Turning to which, Sir David, you do seem like a bit of an apologist for no-principles May. The whole business with Trump and Erdogan was repulsive and of course deliciously badly timed.

The differences between no principles and political manoeurving should always be borne in mind. Mrs May has a country to run. Whether she plays her cards correctly can be discussed, but the cards will not usually fall in a way that you or I might think of. We do not have to handle all the contrary foces at work. And in any case my main point is that we the elite are to some extent responsible for the madness that we now experience, though what we should have done is not so easy to decide

Political manouevring is one thing. Directly contradicting everything you said before Brexit by your over-emphatic championship of it after the Referendum is something else altogether. I for one shall never forgive her for the odious 'a citizen of the world is a citizen of nowhere'. And we even thought she had an ulterior motive appointing Boris as Foreign Secretary. Not so, it seems. Pure foolishness.

In any case, decades of lies fed by the right-wing press have been far more detrimental to the current madness than elitism. Though the banks' refusal to change certainly fuelled a lot of anger.

It is very, very hard to keep balance, but one must, so I write here to validate your efforts. We will accomplish nothing if we burn out, so we must each of us find our own individual method of keeping things in balance, including not only identifying actions that make the most sense to us as individuals, but also giving ourselves permission for respite. Yesterday we attended a march and rally in support of refugees. This proved to be action and respite all in one. The Lead Sponsor, Rev Samuel Speers, Vassar College Director of Religious & Spiritual Life, and many church and community leaders spoke. The event was put together in the space of 48 hours, and J estimated that there may have been 1,000 present. I witnessed no unbridled anger, only determination and compassion, accompanied by a keen sense of what is right and just. Two people alongside me expressed their fears about people burning out. We agreed that, as important as it is to act, it is equally important not to become overwhelmed. If everyone contributes, while our own participation may seem small, the accumulated effect can be great. We must hold on to that, despite the odds.

Wonderful and moving to read, Sue, thanks so much for that. I know we've discussed the advance/retreat syndrome quite a lot since the middle of last year. I'm sure I've got a tougher hide now - threats and opposition don't make me feel threatened. Saw some motivational saw or other which pointed out that the words 'me, too' by way of a response to something you might say are two of the most powerful in the language.

And now I'm off to meet the inspirational Tea Tuhkur from Estonia and meet up with other totally light-filled young people at Paavo Jarvi's latest concert, including Nielsen's Sixth Symphony where things get so quickly out of kilter but positivity remain.