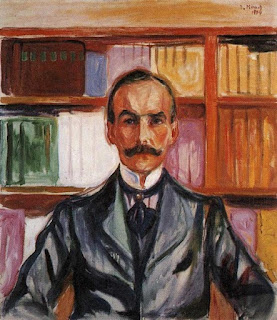 It was because of his involvement in the scenario of the masterpiece we know as Der Rosenkavalier that I turned to a biography of Count Harry Kessler, but as usual if the personality catches one's fancy, I'm now on his trail. This is a writer as fascinating as Stefan Zweig for the picture he gives of his troubled times. Thanks to Laird M Easton's biography, published by University of California Press with an attention to detail worthy of Kessler as meticulous book-producer, I've ordered up the two volumes of diaries. One copy of the first I presented to Dame Felicity Lott on Monday as a present for her visit to my Opera in Depth class at the Frontline Club; more on those wonderful two hours in a future post, but this is a good excuse to put up one picture of the lovely lady, self looming larger only because the photographer, David Thompson, was sitting on the left side. 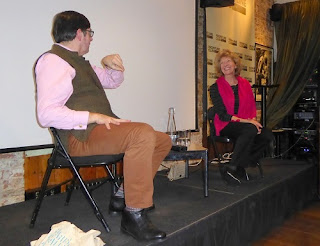 Suffice it to say she was charming, natural, very funny and very moving (especially on Carlos Kleiber, for her as for anyone who cares about conducting absolutely the greatest). She also read several of the Marschallin's monologues in an English translation I'd originally done for another deserving Dame, Harriet Walter, to perfection

As for Kessler, I wanted not to review, as it were, the whole book, but just to offer some quotations from the Count's post-First-World-War years, unhappy ones, inevitably, and one reads with dread of his hopes for a better world against the background of a Germany in turmoil. A brief thumbnail sketch first, and no-one could do it better than Easton in his epilogue:

Kessler was neither a professional politician nor a diplomat, neither an artist nor a professional writer [I take that to be in the narrowest sense, for he was/is a superb wordsmith], neither an academic nor a professional museum director, not quite a soldier and not quite a secret agent, not English or French, but not, in the end, fully Germanic either. He had no firm vocation, and no fixed abode [though it should be added in this context that he was immensely rich, at least up until the First World War]. Kessler's life seems to lack clear contours, spills out over all banks, meanders, in places runs into the sand. The number and scale of his concrete achievements, while impressive enough, pale admittedly against the myriad unrealized or only partially realized ambitions, schemes and projects which, like a vast nimbus of potentiality, accompanied him up until the very last years [he died, a refugee from the Nazis, in November 1937] 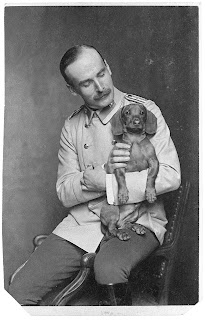 The other point crucial to the background here is what Easton described as Kessler's perception of 'the great axis of his life, the agonistic relation between Macht and Geist, between power and spirit'. A child of the Wilhelminian/Bismarck era, he didn't easily set aside his sense of Germany's supremacy in the early part of the First World War. But then disillusion set in, and he moved more towards socialism and pacifism. His espousal of the new when contemporaries like Hofmannsthal were turning their back on him is an attractive trait: quite often he missed the mark, one suspects because he fancied the young male artist in question, but he did also see the value in Georg Grosz, for instance. Perceptive from a man painted (splendidly and several times, see up top and lower down) by Munch in the pre-war days. 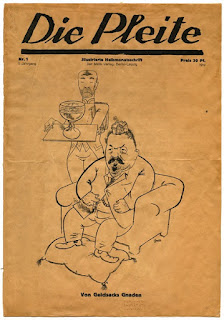 Kessler's activities in the 1920s and 30s make for depressing reading only because we have the gift of hindsight. Funny, though, how many of his observations could be made today - this is certainly a case of finding the present in the past. In the lectures published in Germany and Europe (1924), he argued that the way to mitigate suspicion of France towards Germany was to seek 'common interests recognized by both countries and sufficiently powerful to minimize the risk of aggression from either side'. As Easton points out, his plea for democratic control of both countries' industries anticipated 'by 27 years the formation of the European Coal and Steel Community, forerunner of today's European Community'.

At the same time, he misjudged Hitler as 'a local agitator endowed with some sort of magnetism for Bavarians'; sounds familiar to many of us who thought Trump and Brexit couldn't go beyond the lunatic fringe.

His visit to America at that time is fascinating for some of the judgments:

Nothing here really has roots: not the Good, nor the Bad, not the houses, not the people; neither the friendships, nor the enmities. The soil, both the spiritual and the instinctual, is still too new and too loose. Feelings and judgments grow like asparagus and like asparagus are soon "out of season"...Will America ever become deep?

I feel the old maids of both sexes will kill America like the priests killed and emasculated Spain. Nobody can have any conception of this moral oppression and tyranny who has not been here. The atmosphere of America, its fear and hatred of the truth are those of a tea party in the back parlor of a parsonage. There are a few faint signs of revolt; but up to date they do not amount to much considering the huge mass which takes its firm stand with the old ladies. 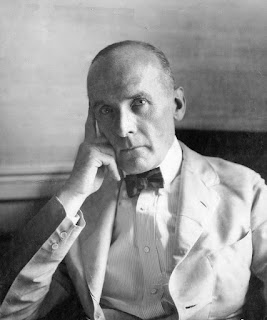 The only route that might offer help to the world, he thought, was the League of Nations, subject to certain amendments he recommended. He feared the rise of the Nationalist Party in Germany:

For us there is only the League of Nations and England or a war of revenge and Russia. Any middle path leads to the abyss just like our tacking back and forth between England and Russia under Wilhelm II...now the struggle has been finally decided and it is only disastrous to put forth the old,,,Ludendorff. Now only a united Europe can still retain her control of the world.

He noted how the paramilitary violence blocked the way in Germany and had reached an impasse: 'the narrow-minded people at home and the ghost-seeing here [in Paris] join hands in a danse macabre.' And he told his audience, in a motto for our times, too,'both here and there we must take up the fight with the same decisiveness and bitterness as our enemies or bury our hope for peace. Contentious and reckless pacifists are needed, not whining.' 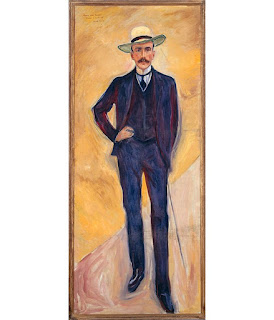 Well, we know what happened. He thought that the poison of National Socialism was 'a disease of the German lower middle class'; I reckon we need to use that unfashionable term, rather than 'working class', of Trump's chief constituency if we are to move forward and stop beating ourselves up about 'the people v the elites', which may be true in part - the disease of the banks and the corporations has never been properly addressed - but isn't the whole story. There was no proper opposition to the Nazis then; it is incoherent so far in America and, as represented by Corbyn's lamentable 'command' over the Labour Party, disastrous in the UK. Anyway, I'm sure I'll have cause to return to the Kessler of the Diaries in these pages. In the meantime, I'm back to the lighter ironies of Péter Esterházy's dazzling family pseudo-history Celestial Harmonies, which is oddly comforting as well as very funny at times.
Posted by David at 14:33

Such a fascinating trail of crumbs you've laid down here. Do you find, as I do, that as you read almost anything, you read it differently, or anyway with different emphasis, given the tenor of the times? Kessler seems to have much to say to our situation now, that is certain.

Yes, absolutely, Sue, and while I was always scared out of my wits by Shostakovich's most bitter ironies, I understand the banality of those better too, or should I say I feel them more deeply. Mahler, too, and the other night the first movement of Nielsen's Sixth, a constant build up of energy which constantly collapses and regroups.