Still life in a turbulent time 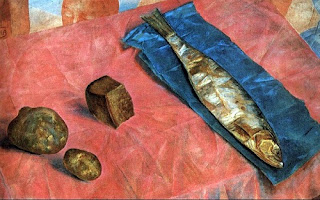 Right at the heart of the colourful riot that is the Royal Academy of Arts' Revolution: Russian Art 1917-1932, in a room devoted entirely to the unique style of Kuzma Petrov-Vodkin, my eye was drawn to this still life of 1918. I knew several others of his, but not the extraordinary treatment he lends to a herring, a couple of potatoes and a lump of bread - the restricted fare of hard times.

It's the artist's prerogative to lend grace to the ordinary in a nutshell. A parallel struck me the day after seeing the exhibition at a point I reached in Péter Esterházy's Celestial Harmonies - not easy reading, but every page of this discursive take on the author's very famous family deserves to be savoured, and a lightness of touch mitigates the difficulty of grasping such allusice richness. His father, under the straitened circumstances in which the family finds itself under Communism, is making a drama of preparing to attack a bone for its marrow by extracting it from the cooking pot.

'The midnight predators gather for the kill,' our father announced mock-heroically, then sat down at the kitchen table with ceremony, the pot in front of him. We crowded around him, buzzing and craning our necks, so we shouldn't miss anything. 'Take your places,' he said, looking at us with make-believe severity and then, like a chief physician at the operating table (or a priest conducting mass), he raised his two hands. 'The scalpel, sweetheart!' he said to mother, who did and did not take part in the show. She was happy that we were happy, we, her children, and also the man who at that moment was busy pretending that life is beautiful and exciting, and he the master of all he surveys, the benefactor of the small group for whose benefit he was demonstrating that this beauty and excitement is everywhere at all times: just look, even in a bone, a leg of beef!

And perhaps it's not even pretending so much as creating, on both the author's and his father's part. By the same token, Petrov-Vodkin wraps magic around the ordinary in the RA room devoted to his work, an exhibition-within-an-exhibition. Of course there are questions around the stunt as a whole: the plutocrats and the Russian governmental propagandists making the exhibition possible with a stunning array of the best - Moscow and St Petersburg galleries must be bare of their post-revolutionary masterpieces at the moment - as well as the questionable aspects of celebrating a vision that quickly soured. A grim 'Room of Memory' at the end, showing 'criminal' mugshots of many who were murdered under Lenin and Stalin, attempts to make amends. 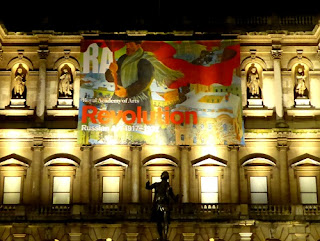 But surely the point is the unleashing of energy, good or bad, into kinetic art. For, despite the stillness in the leading image, all is movement in this exhibition. And there are some impressive novelties which fit the giant RA rooms so well: the recreation of an El Lissitzky workers' room in the 'Brave New World' gallery, which is more coherent than it looks here 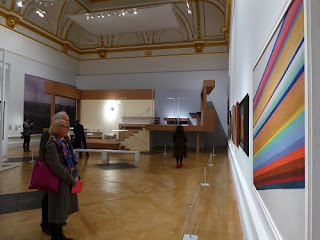 and above all the magnificent attempt at reassembling Malevich's room of his own work for the 1932 exhibition 'Fifteen Years of Artists of the Russian Soviet Republics'. Not even the recent Malevich show at Tate Modern managed this. 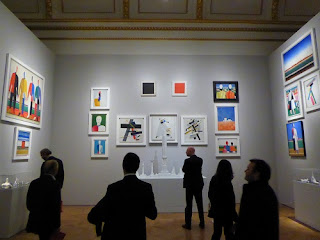 The RA has gathered together most of those original works - with, I think I'm right in saying, only two substitutions - and recreated the models; the effect is very impressive, possibly more so than the original, of which we do have a photograph. 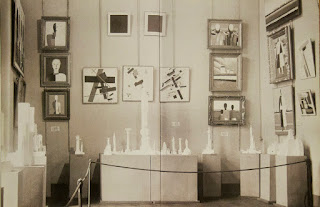 Otherwise, the revelations to me were the Petrov-Vodkin collection, the ceramics and the work of one artist with whom I wasn't familiar, Alexander Deineka - variable, but this one of textile workers fascinated me. 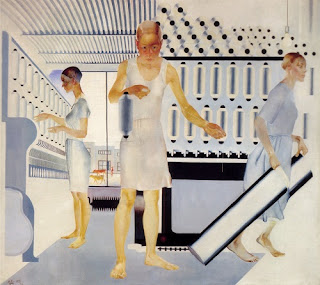 For the rest, it was a bracing reacquaintance with many old friends, and nostalgic memories especially of many hours spent in St Petersburg's Russian Museum - a more essential gallery for the understanding of the native culture, certainly, than the breathtaking Hermitage.

We leaped from one exhibition to another, the David Hockney retrospective at Tate Britain, for an intimate little gathering of 2000 or so folk thinking they were going to get a close audience with the master. Actually we did, since when we arrived the queues to get in to the exhibition proper were enormous, and - diverted by good company - we suddenly found ourselves with only 15 minutes to rush around. So the first two rooms, with pictures of the ilk of 'We Two Boys Together Clinging', which impacted so much on me as a teenager, were empty, and in the third our only companions were Ian McKellen and Neil Tennant, chatting - appropriately enough - in front of the theatrical 'Ventriloquist' canvas.

The whirl wouldn't have worked if we hadn't already been so familiar with many of the canvases, and seen so many in previous exhibitions, but no doubt about it - this would have to be the most impressive in terms of together-hanging, above all in the room of heyday swimming-pool paintings and double portraits. 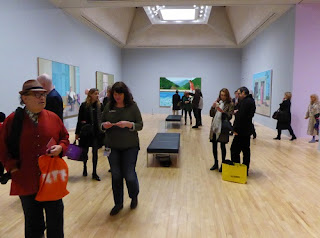 Then it's on to the exquisite drawings, his best portraits (Auden and mum especially) followed by the photomontages (mum, again, at Whitby Abbey my favourite) and the last room with stuff I really love, the colourful road pictures. 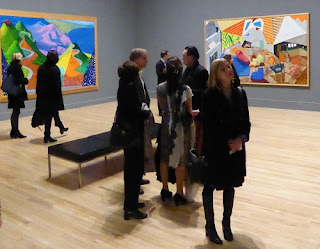 And these two of still lives - only connect - by the sea; I didn't know them. I hope these people will forgive their featuring in my general impression. 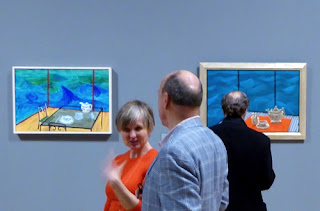 On to the English nature pictures, the paint rather gauchely applied IMO, 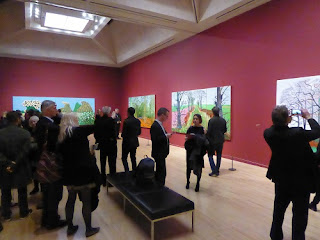 and to the less interesting final rooms. As Hockney's old pal and ours (of lesser years) Jonny Brown observed, it must have been the artist's choice not to include his (again IMO) terrible later portraits (the National Gallery wardens must be the worst). Here's Jonny with the ever-amazing wise young bird Thierry Alexandre by Millais' Ophelia 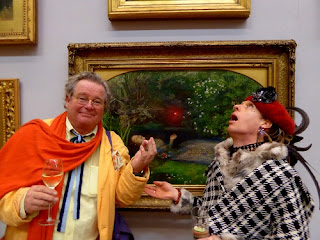 in the dreadfully-hung and badly-lit Tate Britain room mixing Pre-Raphaelites with really superior stuff like several of Whistler's Nocturnes. And Thierry allows me to transition to something I should have written about months ago, beloved artist Paul Ryan's show on the impact of InterRailing at Europe House's 12 Star Gallery. Here's the diva/o's back, in the first of the portraits here taken by the 12 Star's resident photographer, 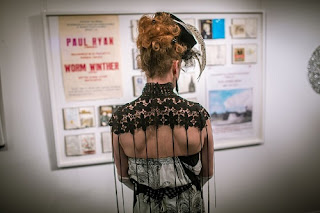 and further portraits in front of some of the exhibits: the artist flanked by myself on the left and dear Chris Gunness with my goddog (by which I mean I am his godfather) Teddy on the right, 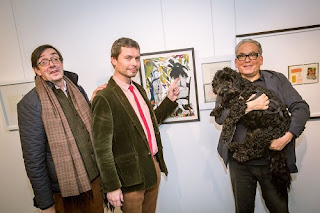 the great Jeremy Deller alongside his InterRail exhibit, 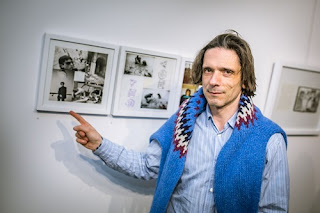 composer David Sawer with the manuscript of an early work written in the wake of an InterRailing experience, 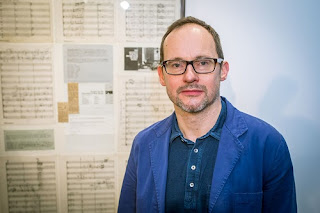 and Lady C with her dog - I had to leave for Richard Jones's production of Once in a Lifetime so didn't get to meet them - in front of hers. 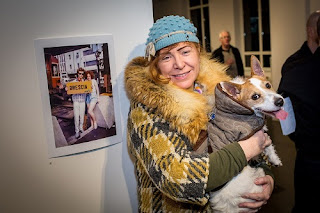 It all brought back memories of happy days in which I discovered the joys of independent travel - first under the organisational aegis of Christopher Lambton, who worked out our train journey to Istanbul and back, with a further loop by other transports in the wake of the military coup around the west coast, in 1981; and then, the following summer, the revelation of how good it was to travel alone, and feel completely free, after I left friend Simon at Ravenna and travelled on to Padua, Venice and Vienna with Bertrand Russell's The Pursuit of Happiness confirming the source of my joy.
Posted by David at 12:52

I am sorry to be such a poor correspondent, particularly with a post that starts off first thing with such an evocative still life (by an artist about whom I know nothing). The exhibit you describe is one I'd love to see. Celestial Harmonies sounds like a book I'd enjoy, too--can you say what makes it not such easy reading? I'm right now reading Morantes History: A Novel and not finding it compelling, though I think it's more a matter of it not meshing with my current state of mind than the quality of the book.

It's elliptical, jumps from idea to idea as from time to time and its tone is often hard to gauge. Verges on the Joycean at times in its japes. Not exactly a page-turner, but there's enlightenment and individuality on every page. Nearing the end so shall write more about it here anon. Don't know Morantes - must investigate.