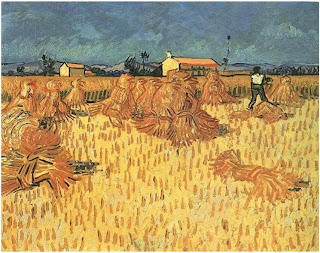 Last Tuesday I went into BBC Broadcasting House to record this coming Saturday's Building a Library for Radio 3's CD Review: by my own choice, following on from the sunny time spent with Delibes' Coppelia, the subject was Bizet's incidental music for Alphonse Daudet's Provencal tragedy L'Arlesienne. It was actually a chance remark by my friend and unofficial former mentor Dr. Roger Savage that Bizet's Adagietto must be behind Elgar's most introspective moments that led me to listen again, and fall in love.

Of course I can't give even a hint of the 'winner' among the 20 or so recordings. But I would like to sing the praises a little more of the work itself. As I've discovered, all of Bizet's 27 numbers for Daudet's play are worth doing, though they need some kind of dramatic context - and only one of the three contenders there gives that, though unhelpfully it uses German actors (excellent all) rather than French. So it boiled down to a choice between various versions of the famous Suites: the first put together and re-orchestrated by Bizet himself, the second assembled by his friend Guiraud after his death (with a not exactly appropriate borrowing, the Minuet from La Jolie Fille de Perth).

Beyond the striking sax-solo portrait of L'Innocent, the hero of the drama's slow-witted brother who 'comes to his senses' just as Frederi, the protagonist, is abandoning his, and the tragic lovesickness of Frederi himself, there's not much here to tell you what a predominantly dark work this is. You need to hear all the melodramas for the play proper to know that it all ends badly, with a dramatic defenestration. As in Carmen, the merrymaking of the crowd - in the opera, for the bullfight, in the play, for a celebration of the feast of St. Eligius - serves as background to the tragic denouement. 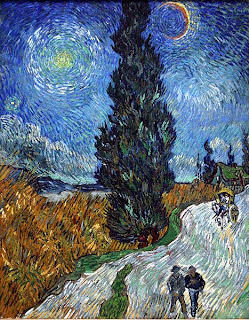 And what a strange play it is, beyond the evocation of Provence which has so much in common with the later images of Van Gogh I've reproduced here. The 'girl from Arles' who gives the hero so much grief never appears: is she a Carmen-like vamp or just an ordinary woman with a history? There's a morbidity about our Frederi which apparently casts back to Daudet's unfortunate experience in his youth: one in which he contracted the syphilis which was to lead to a slow, lingering death (I've just picked up a copy of his sketches on the subject). Like Don Jose, his passion is unquenchable, but the violence is turned against himself. And there's also a Micaela, the village girl Vivette who loves him unquestioningly. Her music provides the real raison d'etre of the Second Suite, apart from its brilliantly effective orchestral combination of Farandole and old Provencal marching song, which we used to sing in Christmas carol services as 'De bon matin, j'ai recontre le train de trois grands rois'. 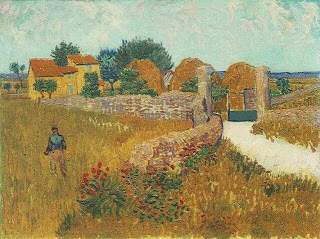 What did I take away from repeated hearings of the music? That Bizet's woodwind scoring, like Glinka's, is simple but perfect and goes straight to the heart. That the Menuetto's quiet ending may have influenced the Gavotte of Prokofiev's Classical Symphony; that the four-part string writing of the incredibly brief but profound Adagietto, which really ought to be played in the original by a string quartet, undoubtedly made its mark on Elgar, Mahler and Strauss.

This is potent writing on a miniature scale which finds it hard these days to carve out a niche in the concert hall, just as the fastidiously wrought, discreetly sensuous operas of Bizet's devoted friend Massenet no longer play a major role in the repertoire. And I doubt if that will change with the Royal Opera's production of Cendrillon, much as I love the piece and enjoyed most of the production. Read all about it on The Arts Desk, where I've also briefly commented on the Opera North vs Lee Hall presumed-homophobia kerfuffle (fellow blogger Jon Dryden Taylor wrote the response Opera North should have given). In the meantime, enjoy this striking production shot by Bill Cooper of simpatica if surprisingly pale-voiced Joyce DiDonato as Cinders with the stunning mezzo Prince of the real star, Alice Coote. 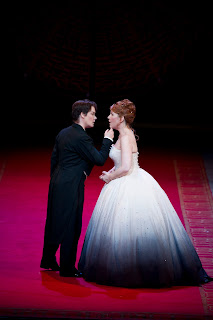 And don't forget to tune in to Radio 3 on Saturday morning, or go to the iPlayer for a week thereafter. I hope you come to love Bizet's music as much as I do. Next season it's back to the Russians, and I intend to give Prokofiev Vol. 2 a much-needed kick this summer, but I've enjoyed my Gallic interlude beyond measure.
Posted by David at 09:42

Looking forward to listening to the Bizet - particularly as it is one of my favourites. And I know I'll learn to enjoy it even more!

The Cendrillon doesn't sound as good as it should be. We had a production many years ago in Ottawa - Von Stade, Della Jones, Ruth Welting, Maureen Forrester and Louis Quilico in a John Copley production designed by John Pascoe. Mario Bernardi was the conductor and it was filmed for television. It was a magical evening - despite a bit of the longeurs you mentioned. It was unfortunate that Von Stade recorded it with a tenor Prince - as I recall Gedda a bit past his prime to boot.

The dream team, of course, at least as far as your Cendrillon and Fairy Godmother went. Actually having been to the Chelsea Opera concert performance with a mezzo Prince - as was the one I was in at the City Lit back in '86 - I returned to the recording expecting to be disconcerted by Gedda. But I reckon he still sounds youthful and ardent, and what you lose in the blend of voices you gain in the passion and the Werther echoes.

Many years ago I bought a recording of the complete L'Arlesienne music without any dramatic context and even that was a revelation. I loved he various music cues and hearing that so many had chorus. I also gained a new appreciation of the suites in terms of the construction of the individual movements out of various of the music cues from the full score.

And I thought again of what a rich experience going to the theater must have been in the eighteenth and nineteenth centuries.

As you've brought up Mr. Hall's imperiled opera, Parterre announced that all is settled by a change so minor and so meaning so much the exact same thing that it seems obvious Opera North and the school caved under international ridicule and disapproval rather than because of a change that can't even be considered cosmetic.

Yes, I picked up on the tweak ('gay'/'away' substituted for 'queer'/'here') in a stop-press addition to the TAD Buzz piece.

As for the rich experience of former theatregoing days, we may not get quite so much in terms of incidental music these days, but Richard Jones's new production of 'Government Inspector' (as it is called) has a totally integrated and suitably wacky score from David Sawer. The whole thing is brilliant and choreographed/musically timed to the nth degree.

Whatever happened to Djamileh, so popular in it's day. For example, it was one of the most frequently performed operas at the Hofoper in Vienna during Mahler's reign there.

Didn't Djamileh get an airing in Opera North's '8 Little Greats' series? I saw four of them, but not that one.

According to James Harding, Massenet's Therese is the one we should be campaigning for. I once heard a recording, but with the very odd-sounding Sutherland sidekick Huguette Tourangeau. Didn't make an impression then, but that was a very long time ago.

I am waiting desperately for volume 2 of Prokofiev and as I am 76 please move along with it so I can read it before I am senile or departed.

You are right, Donald: a message not quite from the other side kicking me up the backside. If only you knew the problems of trying to squeeze in a labour of love between work that earns me a living (and there's less of that about than when I wrote Vol. 1). But I swore an oath to my dear Noelle before she died that I would do it, and I shall.

Lettres de Mon Moulin is a wonderful book......written when Daudet was in his twenties and clearly a young man's work. It has a kind of music about it ( especially in French). Arlesienne evolved from the original as part of the Lettres where I like best La Mule du Pape: "Qui n'a pas vu Avignon du temps des Papes n'a rien vu........"

One of the bonuses of the Minkowski disc, at least in its supposedly limited-edition packaging, is that it included the original story from Lettres de mon moulin on which Daudet based the full-length play. It's only a couple of pages long and the characters have different names.