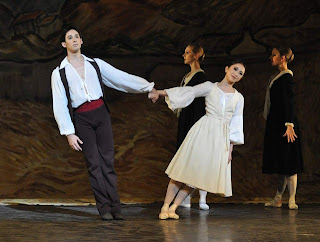 Nearly missed the chance to see the score I'd been living with so long for the Radio 3 Building a Library, Bizet's L'Arlesienne music, choreographed by the intriguing Roland Petit. My dance-distinguished colleague Ismene Brown duly commemorated his death earlier this month at the age of 87 with an obituary on The Arts Desk, and she also drew my attention to the English National Ballet's Petit triple bill at the Coliseum, which I went along to see on Saturday evening. The photo below comes from Thomas Peter Schultz via Wikimedia Commons; the production shots are by the very generous permission of John Ross, whose other superb ballet images can be seen on the ballet.co site. 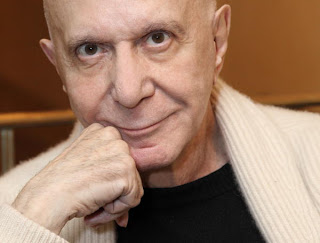 As everyone seems to have pointed out, the three ballets all deal with distressed young men seeking out death. Petit offers very personal, if slightly repetitious, takes on the bare bones of Daudet's L'Arlesienne, a Carmen story of sorts (it can hardly be called Merimee's, and only loosely Bizet's) and a Cocteau melodrama about a tortured jeune homme in a garret who hangs himself at the instigation of a lady in a yellow dress who turns out to be La Mort and shows the hanged man Paris by night.

L'Arlesienne, the latest (mid-70s) choreography of the three, keeps Daudet's central triangle of Frederi, the sweet village girl Vivette he's supposed to marry and the invisible girl from Arles who's driving him to madness. The corps participation is rather wonderful, with some stylised head-crooking and elevating straight out of Nijinska' work on Stravinsky's Les Noces to suggest the pressure of conformity. I actually thought the best number was the one Bizet uses to depict the unrequited Vivette, here another corps + soloists ritual. Vivette in the ballet (Erina Takahashi) gets the rather bland Minuet from La Jolie Fille de Perth as her solo; Frederi (the attractive Esteban Berlanga) does his leapy-leapy stuff to the Pastorale, though he spends more of his time in the early stages frozen with anguish. 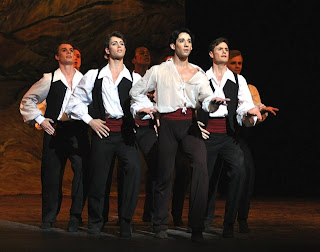 The main drawback is that Frederi starts distraught with nowhere to go; at least in the play there's a brief interlude of happiness in the general drama of pain. And the old people's Adagietto is too settled for this central mesalliance. If Petit had gone to Bizet's melodrama numbers, he would also have found a more tragic musical ending. As it is, Frederi whips himself up in a dance of death to the Farandole and defenestrates himself in the final bars. At least Berlanga did this Orestes-pursued-by-invisible-Furies number well, with the final leap brilliantly caught in John Ross's photo. 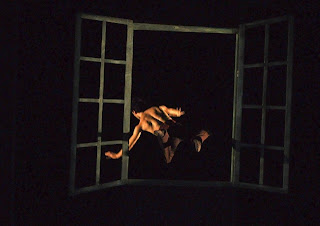 Petit's Carmen was a sensation in 1949 - all that sex, the wonderful oddity of the uptight young man rather than the Carmen dancing the Habanera while the corps mockingly shout the words 'l'amour est enfant de boheme' etc, the brutal denouement to thwacking timps (Begona Cao and Fabian Reimar pictured below). 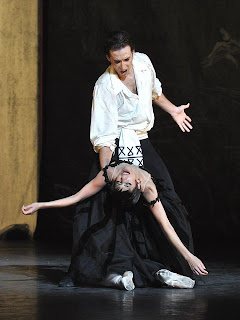 But the way the score's used is a mess - how much better a job Shchedrin made of it for Plisetskaya some years later - and Petit manages to complicate a simple story. Instead of village soldier boy corrupted and maddened by femme fatale this Don Jose seems to be a proud matador, while Escamillo is a camp sideshow who couldn't on his own precipitate the final tragedy. Cao, despite great long legs, seemed to be having a charisma bypass, and there was no chemistry with Reimair. Even the central Pas de deux was rather irksome: why use the scene with castanets when the bugle calls offstage signify nothing in your own take on the drama? 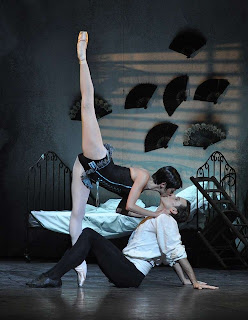 Most fun of all, if pure melodramatic tosh (blame Cocteau, and Petit's showbusiness instincts), was Le Jeune Homme et la Mort - and here Benjamin Pope's rather solid conducting of an astonishingly high-class ballet orchestra (Gareth Hulse and Katie Clemmow the oboists) came into its own with Respighi's grandiose arrangement of Bach's Passacaglia and Fugue in C minor. Yonah Acosta, nephew of Carlos and pictured below in Arnaud Stephenson's rehearsal photo working with Luigi Bonino, is a powerful physical presence, well able to do 101 things with table annd chairs, and the right age for adolescent angst, too: I thought he could well be a star, but balletomanes who know more than I do weren't so sure. 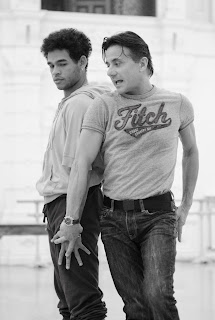 Anyway, with no actual production pics of Acosta Jr, how could we not see how the original jeune homme, Jean Babilee, made a cultish figure of protest. You'll need to bypass a minute or so of talk for the excerpts.

And similarly, how could we not see the beautiful Rudolf as a slightly more ballet-conscious young man? Interestingly, and I think less impressively, this features the Bach organ original rather than Respighi's orchestration.

And now I'm off to find a copy of Black Tights starring charismatic Mrs Petit (Zizi Jeanmaire), Moira Shearer and Cyd Charisse. I also want to see the Petit ballet with the Tchaikovsky arrangements John Lanchbery was most proud of, Puss in Boots. Sadly there are only a couple of clips on YouTube, but the chaste (compared to Stravinsky) treatment of Tchaik miniatures is impressive.

So, it was an interesting but very mixed week, with no total hits: the Brian - time to move on from that - followed by the brave, clearly gifted Belarus Free Theatre actors trying to make something out of execrable texts at the Almeida, Katie Mitchell's idiosyncratic but not often well-acted take on a Jacobean domestic tragedy at the National (which has at least got me reading more), the curate's-egg Halle Prom - worth it for Schiff in Bartok 3 and the Proms premiere of Sibelius's Scenes historiques Suite 2 (now there's a mini-masterpiece) - and finally this. I guess the bottom line is that ENB's was a rather inhibited English take on French style, despite its truly international team of dancers.
Posted by David at 10:49