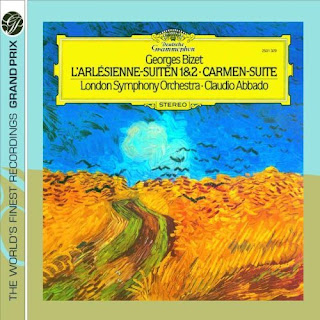 No, we supposedly civilized people don't USE such terms, do we (vide that splendid movie Little Miss Sunshine), least of all in the hallowed halls of Radio 3's CD Review, where the word 'winner' is out of bounds. Nevertheless, as they say, a sop is needed to the public at the end of Building a Library, and usually I end up saying, this is my personal choice but I would have been equally happy with x, y and z. Not so for the suites-incarnation of Bizet's L'Arlesienne, I have to say, where the sophisticated beauty of Abbado's LSO left everyone else - Beecham included - some way behind. 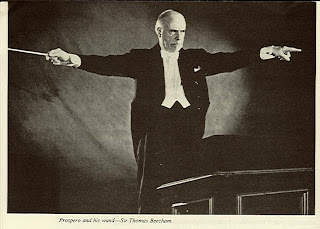 And you may have found it odd that I made so much of Tommy's failure to use a Provencal side drum instead of a mimsy tambourine in the middle of the Pastorale. QED: hope the Cluytens alternative made the point. Is anyone going to complain that I didn't spend long enough on the complete incidental music? Well, combining suites and original was always going to be problematic - though nowhere near as bad as the first time I 'did' Prokofiev's Romeo and Juliet and was supposed to jump between ballet and concert-hall versions, very different - but made a lot simpler by the fact that the best of the two available had a German text, and that the alternative, Plasson, was as usual a bit sleepy and out of focus.

In the world of the play, the melodrama metamorphoses on Frederi's and L'Innocent's themes enrich our understanding of Bizet's subtlety but are too snippety to work in anything other than a semi-staged version with actors. Still, I'm very glad to have got to know them, and to love Bizet's incomparable woodwind writing even more. The complete Building a Library is here on the Radio 3 iPlayer for the next week; go to about the 34 minute mark to hear Andrew McGregor's introduction (with apologies for the spoiler above if you hadn't wanted to know the no. 1 choice)

Have you noticed how journalists spend far too much time accentuating the negative? 'What's your worst/Which composer do you really hate/What would you NOT take with you on a Desert Island?' are the most frequently asked questions. At best it's a bit of fun, but usually all it serves to do is to emphasise the blind spots of the writer. And never more so than in the BBC Music Magazine's latest attempt to get the critics to say what bores them. The disclaimer 'one man's meat is another man's poison' doesn't fail to conceal the fact that in nine cases out of ten the last laugh is on the disliker, unless he or she expresses that aversion in golden prose. Good grief, many of these pet hates are among my biggest loves: Tristan, Butterfly, Cenerentola, Strauss's Don Quixote, Britten's A Midsummer Night's Dream, Mahler 8, Bruckner 7 (though admittedly the Britten and the Bruckner, like the Brahms German Requiem also cited, can sound awful in ponderous or frigid hands, but that's not the fault of the music)...

The only one I half agree with is Fiona Maddocks in her insistence that Purcell's Dido and Aeneas needs to cut to the chase and 'When I am laid in earth' which is, of course, one of the supreme laments of all time. Let's hear it for La Connolly at the 2009 Last Night of the Proms.

My other problem pieces? Quite a few, from Monteverdi's Return of Ulysses via Beethoven's Violin, Third Piano and Emperor Concertos (torpid slow movements especially) to Glass's Satyagraha. But I freely admit that, with the possible exception of glassy Phil, whose bland experiment I'd argue as tied to its time and place (move on, Mr Glass, evolve), blind spots they remain.
Posted by David at 10:37

David - rather intrigued by the 'far back' sound in Kegel's 'rather eccentric' version of the Intermezzo. Is that down to to the dominant cornet, do you think?

Difficult to say, Catriona - but I didn't get to illustrate the most far-back-sounding ones, like the Slovak recording on Naxos (not a bad interpretation, but in impossible sound from the days before that company got its act together). It's a shame the selection process and the time limit mean that some of the weirder specimens don't get a look-in. But there was enough weirdness there already, I thought.

I have to confess to being a bit mystified by the negatives about Dido ( of course the lament is with everyone beyond any negatives). But the whole opera has the ability to move the action forward and to show the personalities of the characters - Aeneas, a bit wooden; Hecate and the witches, well, like witches; even the small parts, as with the sailor - a very clear dramatic portrayal of the "real world" background to the drama of love and betrayal; Belinda - "pursue thy conquest" - it is all her fault, and maybe she planned it ( if one takes Belinda as sister and therefore heiress). The way the drama evolves so quickly but with very rapid strokes is a masterpiece. Perhaps I put too much weight on Dido as a drama? Or is the criticism rather that the music is rather simple in its construction ( written for a girls school) - which makes it even more brilliant as it evokes each action and character

Part of what makes it pall for me is the assumed humour of the witchy voices - been done to death, not funny. Verdi's witches likewise are better if they just trust the music and don't put on those nasal vaudeville tones - though they ARE supposed to be gossipy and trivial, of course.

David, I think some unscrupulous soul- from News International, perhaps?- may have hacked your blog. You won't believe this, but they've got you saying that the slow movement of the Emperor is torpid...

You got me there for a moment, Jon. Ladies and gentlemen, the master of the one- or two-liner.

Of course, even that I should have phrased carefully - 'a torpid effect on me' is about as far as it goes.

OK, so now I am hopelessly behind! Yet do rest assured I have not been idle. Your Bizet post (of course, including the liberal sprinkling of Van Gogh images to accompany it) so piqued my interest that I found and bookmarked the BBC3 Radio broadcast so I'd be sure to remember to listen on my return from the Adirondacks. I listened yesterday with great interest, and saw this post, too. This is where the internet can be truly magical: not only was I able to read your "fore" and "aft" views, but I was able to hear the broadcast, too. In the broadcast, I particularly appreciated the side-by-side comparisons. While my ear is in no way as finely tuned (nor musically knowledgeable) as yours, you did indeed enable me to hear why you chose the Abbado, and it would be my choice for this piece, too. Simply wonderful, and many thanks!

Positive responses always welcome, though not obligatory - thanks as ever for kind words, Sue.

Hi David. On an utterly and completely different subject, I am doing some work on Italienisches Liederbuch - my summer music project - and I'm having a wonder about the possible relationship between Brahms' Wiegenlied and Nun lass uns Frieden schliessen.

I know Wolf was fearfully critical of Brahms' style and this song seems to take the Wiegenlied as a starting off point and show what another pair of hands can do with it.

As a non-scholar, I don't know where to look to find out if people have written about the parallels here. Any good pointers appreciated. Cheers. Frith

Good to hear from you, Frith, and hope you get some pleasure from dropping in here. I can't answer that, but as you suggest others here might. Good luck with it.