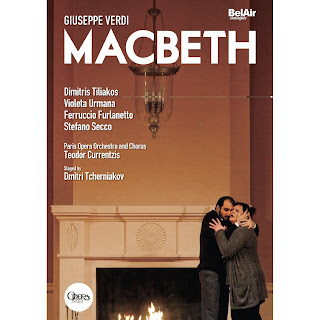 To be fair, it was already a draw from my perspective: two productions which created their own, consistent visions and two which were a bit of a dog's dinner. Now the balance has swung back in favour of Dmitri Tcherniakov, in my view the most interesting opera director to have emerged since Richard Jones (and his design sense is singular, too).

Tcherniakov first stunned us with a Eugene Onegin in which the heroine comes across as a manic-depressive and the duel's a nasty accident in a dining room with a gun (all the action takes place around tables) and a production of Prokofiev's The Gambler set in a blue, contemporary hotel and every inch as compelling as Jones's more kaleidoscopic Covent Garden staging. Then he lost me at times with Don Giovanni from Aix as a family saga (Donna Anna is Zerlina's ma, so out with all the class distinctions) and the recent Simon Boccanegra at ENO, good in the early stages but seeming to lose the plot towards the end.

So how glad I was to have reconvened the City Lit Opera in Focus group on Monday for a free end-of-term screening of this Paris Opera Macbeth (production shots via the company and Ruth Walz). Tcherniakov's 2009 Verdi is certainly more of a piece than this year's Boccanegra and veers between a grim small-town square full of locals (not witches) and the Macbeth mansion; aerial shots on a screen establish where we are and, later, how order has broken down.

The crowd scenes don't appear to work at first; why no weird sisters, why have the men mime the lines of the women's chorus too? But they begin to take off as Banquo is murdered in the thick of the crowd and Macbeth comes back for a consultation, only to be presented with the return of bobble-hatted little Fleance. 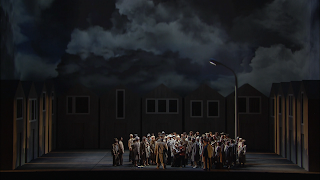 The 'Patria oppressa' chorus, though not as well sung as some, is as dramatically moving as it can be, with the people bringing with them treasured objects from their deserted homes and then Macduff (Stefano Secco, excellent) tearing his heart out from a child's play pen.

In fact all of the set-pieces work superbly as dramatic monologues. Lady Macbeth - and there can be none better or more assured than the never-disappointing Violeta Urmana - delivers her two imperious cabalettas to her husband, setting up the relationship between them more assuredly than Verdi officially permits. She does party tricks to the Brindisi, with increasing desperation (who knew this woman could act? She's normally seen in tatty old revivals where she only has to stand and deliver). And 'Pieta, rispetto, amore' really is done in extremis by Dimitris Tiliakos, who starts with an over-pronounced vibrato but quickly gets better and better: this is a real characterisation, which is more than can be said for Simon Keenlyside's inexplicably muted performance in the recent Covent Garden revival. 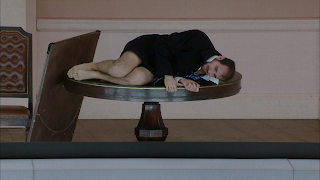 The last two scenes take place in the despoiled mansion; Lady M's somnambulistic antics involve doctor and lady in waiting much more than usual, with all the earlier gestures and party-tricks brought back meaningfully, while Macbeth gets his 'Mal per me' from 1847 in an otherwise 1860s edition (no ballet) and is forced to hear the choruses proclaim victory offstage. 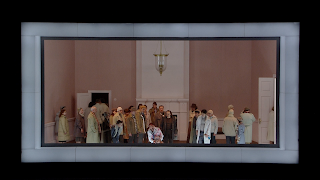 There's a rumour that Tcherniakov couldn't get the chorus to act, so left them in the wings and replaced them with actors who then couldn't mime, and in turn replaced those with twelve extra singers...but you couldn't fit a full chorus in the Macbeth room anyway, and it makes dramatic sense. So I don't buy that, unless you accept that the Paris Opera Chorus isn't up to much and he made the most of that. Otherwise, it's musically resplendent, though young Teodor Currentzis does like extremes and tosses his locks rather more often than is seemly in a disciplined maestro. On the evidence of this and his work on the world premiere of Weinberg's The Passenger - pity he isn't conducting the ENO staging in September - he's a major talent.
Posted by David at 11:14

"Young Teodor Currentzis does like extremes and tosses his locks rather more often than is seemly in a disciplined maestro." I get quite a picture from that, I must say, and, from your comments, will try to keep a lookout for him over here. Tcherniakov, a name I'm not familiar with, either, appears to have something in the offing at some point at the Met. I don't see much opera, but hope to keep an eye out for him, too. The images from the Macbeth production are enormously intriguing.

(PS: There a little mention of you over my way, in the manner of how one thing leads to another. Ah, but were there world enough and time to follow all the threads--so many in this one piece of yours alone!)

Though I'm not in the business of selling or promoting, just enthusing when I love something, I'd say hie thee (t)hither to Amazon and get the DVD. Several of my students were inspired to do so after the screening, not least for Urmana.