Something is very rotten in the land where the lemon trees bloom, and no doubt the state totters. But it will ever be my country of choice after Blighty, and last Thursday's reception at the Italian ambassador's residence to herald the Accademia di Santa Cecilia/Pappano Guillaume Tell Prom reminded me why.

That particular aspect had to do with the table of fare - polpetti, risotto, frutta di mare, dolci, all a morire. But the little recital that preceded the degustation was more than an amuse-bouche. I am certainly not one of those who snidely proclaimed that mezzo Christine Rice was a better result than Angela Gheorghiu, who apparently had been up for the performance while in town reprising her Tosca at Covent Garden but decided against singing in Grosvenor Square, with short notice: I'm always happy to hear that real diva, possibly the only one we've got in the soprano stakes (since I don't think Netrebko or Renee are quite the total package; though then again there's always Anja Harteros...). Rice is pictured above, of course, with ambassador Alain Giorgio Maria Economides and her pianist, the great Tony Pappano, by kind permission of Londra Sera's photographer Tommaso Bruccoleri who also snapped the trio further down.

La Rice is already a diva too, and I was delighted to hear that she was on the bill when I arrived not knowing what to expect, especially as I'd been thinking about her when I went to the ball for the Royal Opera's Cendrillon and heard the Prince Charming of my dreams, Alice Coote; as I wrote in the review, that was a performance up there with Rice's heartbreaking Marguerite in 'the Gilliam Damnation of Faust' at ENO. If we hear two better star turns this year, I'll be surprised. Here are Christine as a more than usually poignant Berlioz Marguerite (ENO photo by Tristram Kenton) 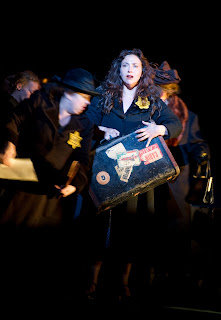 and our waxing Alice in pajamas as Massenet's 'pauvre prince' (Royal Opera photo by Bill Cooper). 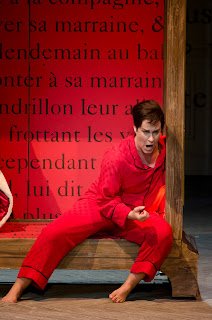 Don't miss the live screening of Cendrillon tonight; I'd say Trafalgar Square is an excellent bet, if July 2009's Barbiere di Siviglia was anything to go by.

Allora, the charming Christine - who is, you might have guessed, an easy-going and unaffected person 'offstage', as I've witnessed in Oxford and now at the residenza - sang only three well-known numbers in Grosvenor Square, but did them all with total flair and ease of communication: Pergolesi's 'Se tu m'ami', the 'Che faro' of Gluck's Orfeo and Carmen's Seguidille. It was a privilege to sit there virtually under her nose and that of maestro-pianist, a true collaborator: and, yes, the voice is exceptionally big and rich in a small room seating 60 people, but never over-urged. I reckon she really will be up to the surprising role of Eboli in the Royal Opera's Don Carlo revival (2013, I believe she said). 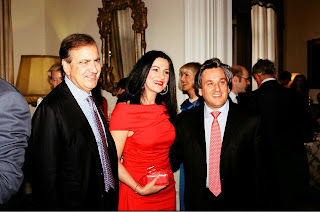 What did Angela, seated in the front row and pictured above with the same two Italians, make of it? I trust she was impressed, and not threatened by a singer who is only likely to overlap with her as Bizet's gypsy. Anyway, she seemed very jolly to be there as a member of the audience, but was so flanked by matrons with, shall we say, cosmetic enhancements at the supper that there was no approaching her (though she did wish our group a very kittenish farewell as she made her diva-exit).

As for Pappano's Rossini, I need no convincing that the Guillaume Tell Prom will be one of the highlights of the season. We were shown a little film, part of which is here on YouTube, promoting the EMI recording. It's a great cast, but from what we heard of the tenor, I'm not sure that he will surpass the star of Chelsea Opera Group's fabulous concert performance, Mark Milhofer.

Anyway, the entire work is an encylopedic masterpiece: long, yes, but with only one or two less than inspired quarters of an hour. I'll be there on Saturday, and indeed at the first night and (how could I miss it, even if it turns out to be as dire as the Foulds World Requiem) Havergal Brian's Gothic Symphony on Sunday.
Posted by David at 09:36

Pappano has given us Guillaume Tell twice in the past four years here at Santa Cecilia. The first time in November 2007 with a largely different cast than in this past year's reprise. I gave it a pass this year despite there being two Canadians in the cast - not very patriotic I know - but was interested to see that John Osborn was appearing once again. He had impressed me greatly in that first run: http://willyorwonthe.blogspot.com/2007/11/do-tell.html

Will be interested to see what you think this time around.

A provocation, based on an aside: surely Fleming is 'the real deal' in a Tebaldi, Caballe, Sutherland way- in that, no matter how it's used, the sheer vocal entitlement is extraordinary?

RF can annoy me, as she can anyone, but whenever she opens her mouth there is always the possibility that something exquisite will happen. That qualifies her for 'real deal' status, I reckon.

And, to haul myself back to the topic, what a Mathilde she would have been/could be.

Sometimes, Jon, but for me it's erratic and the sound - which was beautiful at the start - can curdle very easily. The Verismo disc is a horror - which is a shame, because the repertoire is so interesting.

The fluctuating taste is something else, I reckon, and depends on a good director: she's a superb Countess in the Carsen Capriccio from Paris, but all the alienating mannerisms are there in her Arabella.