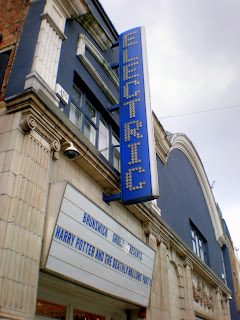 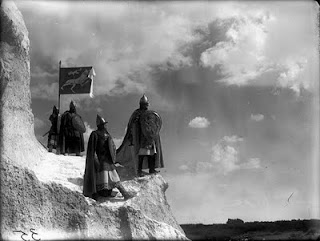 Polymath BBC TV producer/director David Thompson couldn't have chosen a better place to film our talking-heads interval five minutes on the forthcoming Prom featuring Prokofiev's cantata-version Alexander Nevsky (short of going to Russia, that is, and the budgets are, shall we say, a little limited these days). I haven't been to the Electric Cinema in the Portobello Road for some years - now they only show mainstream hits for the most part, as befits the area's very mixed population - and I'd forgotten how spectacularly beautiful it is inside. In the meantime, here's one more from without. 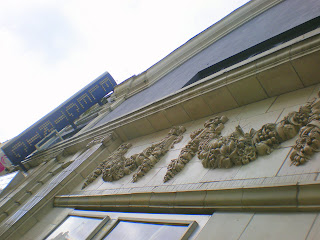 Opened early in 1910 as an offshoot of the original in Birmingham, the Notting Hill Electric's interior still retains the elegance of Gerald Seymour Valentin's Edwardian baroque. In 2001 it re-opened after an impressive £2 million restoration, which means wide leather seats and tons of leg room/drinks space. David, incidentally, used to work there, which puts him in the very dubious company of the Rillington Place murderer Christie (a projectionist, apparently). 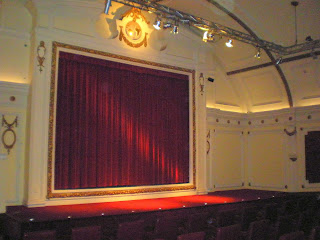 We filmed at the back; my good colleague Marina Frolova-Walker turned up just as I'd finished and she was to be captured in front of the screen - which now has a mechanical device for popping out of its frame for widescreen films. I hope I answered most of David's questions (to which he already knows most of the answers himself in detail, certainly more so than me when it comes to the Eisenstein aspect), but I was conscious of keeping them more soundbitey than usual given the limited time and how much is inevitably going to end up on the cutting-room floor. At the end I turned my far less impressive minicamera on the team: David left, sound man Paul Vigars barely visible and cameraman Mike O'Halloran, who said he'd sorted the problem of my old glasses with their worn non-reflecting patina (still haven't replaced the more recent ones which got mangled up in the bikesmash). 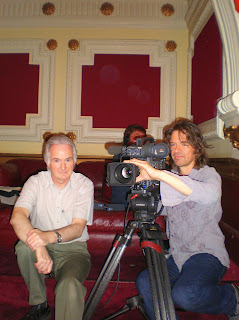 I think I have Prokofiev's part in film and cantata pretty much off pat now, but it was a good opportunity to try and understand better Eisenstein's very detailed analysis of what he calls the 'congruence of the movement of the music with the movement of the visual sense' in his first major book The Film Sense, of which I am very proud to own an austere war-economy first edition copy. The diagrams in the text - he devotes thirteen pages to twelve shots - are a bit scary, but it does make good sense when you fold out the diagram in the back of the book. 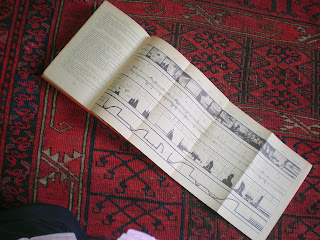 The main point here is that the music's rising, plunging and horizontals are reflected very precisely in the composition of the images. It might become clearer if I reproduce a close-up of the first three shots with diagram and music. 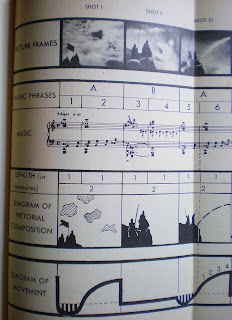 Anyway, I waved The Film Sense around in trying to talk about it for the little documentary, so I hope it adds up sufficiently to be used in the film. Inevitably I wanted to say a little bit more about Ivan the Terrible, which is surely a much deeper, more wide-ranging collaboration between Prokofiev, Eisenstein and the cinematographer Edward Tisse, but Nevsky's Battle on the Ice sequence is where it all began in the sense of the film being composed to the music, and not vice-versa. It's to be found here, with the passage in question starting 10m27s into the sequence (if you want the full Battle on the Ice you'll have to go on to the next segment once this one reaches its end). The soundtrack is famously poor, though listen out for the trombones blaring directly into the microphone, a celebrated sound-innovation.

The cantata version is, of course, very different, and sounds so symphonic when in fact it's just Prokofiev's usual suite-like stitching together: except that the climax is a radical departure from the percussion-only thrash of the icebreak in the film. Svetlanov's performance is peerless, and I'm so glad it's there on YouTube, though I expect Andris Nelsons to make a thrilling job of the cantata on 30 July (just one thing - what were they thinking in scheduling Strauss's Salome's Dance at the end? An official encore? Anyway, Nelsons does that brilliantly too).

Better not spill any more beans, otherwise you won't tune in to BBC Two. One thing I can't recommend too highly is the stunningly comprehensive Criterion three-disc set of Eisenstein's sound years. 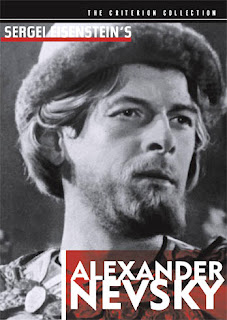 It features not just Nevsky and Ivan but also deleted scenes, a reconstruction of the film-maker's unfinished and much criticised Bezhin Meadow and a documentary which gives more detail on the Hollywood/Disney/Stokowski connection than any I've seen.
Posted by David at 14:46

What power and grandeur. Even in short sections.

Each little bit of the plots of the dramas is unoriginal....it is the acting and the treatment that count and which leave one as though run over by a spiritual omnibus

And yet another new and tantalizing post from you! Must get cracking to catch up, but wanted to respond re Lake Saranac. Yes, Lake Saranac is also in the Adirondacks, further north, but definitely within an easy drive from Elk Lake. Now must listen to that Bartok, too, I see!

The diagrams are a thing of beauty in themselves. And how often has it ever happened that a film director composed his film to the music, rather than the other way around? (Just as an aside, that hooded organist is one scary fellow, isn’t he?)

Slow movement of Bartok Third Piano Concerto a must, if you don't mind the trivializing, for driving along in such landscapes.

Two others I'll never forget: John Adams's The Dharma at Big Sur, which hadn't worked for me at a Prom, re-broadcast on Radio 3 as we were driving up to the Lake District; and Steve Reich's Different Trains whizzing past the tea tree plantations of Australia's east coast (again on the radio - Oz has, or had then, a fabulously intelligent 'Classic FM').

David - it's above all their big patriotic tunes, so original, which go some way to explaining. Plus of course artistic collaboration at such a level. I think I'm right in saying that the Battle was the moment when music dictated the course of the visual action. Though of course Fantasia is the forerunner. Kubrick does it too, in the 'Blue Danube' sequence of 2001. Others may have other examples they can think of.