From Venta Belgarum to cathedral city 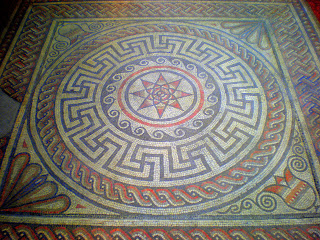 The history of lovely Winchester, which we visited again briefly on a drizzly June afternoon prior to the Grange Park Rusalka, is selectively and handsomely displayed in one of the best small museums I've ever visited. Housed in a flinty early Edwardian pastiche of a Tudor house - good enough to be a Grade 2 listed building - the exhibits take you from the treasures of Roman Britain's fifth largest town on the top floor via finds from the heyday of Wessex's capital through to a select number of transported shops at ground level. It's school-friendly without the aesthetic effect being ruined, as I thought it often was by the interactive stuff and the message boards in Leeds' Royal Armouries, and seems to have had a simple new refurbishment. 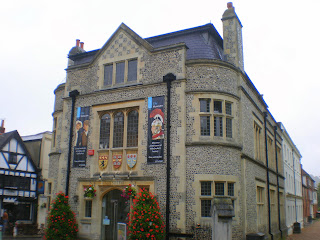 The mosaic floor comes from a villa at nearby Sparsholt. Very well, so the floral and swastika design doesn't have the thrill of the pictorial mosaics at Bignor or Fishbourne, let alone the wonders of Volubilis, but it sits handsomely at the centre of the Roman display. There's a fun photo showing its arrival outside the museum in 1969, having been lifted from the villa's central room in 28 numbered sections. 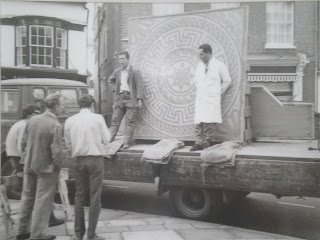 In the display cases there's also a fine bronze head of a girl - slightly earlier than the mosaic, first or early second century AD. As my postcard informs me, 'the hair style is Roman, the hatching round the eyes and ears is a Celtic feature'. 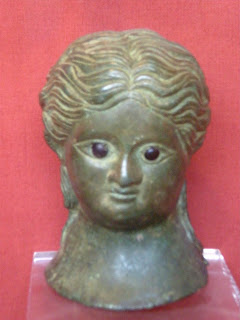 I wasn't at all sure that the wall paintings were originals, since they weren't labelled, but the nice man on the desk downstairs assured me they were. 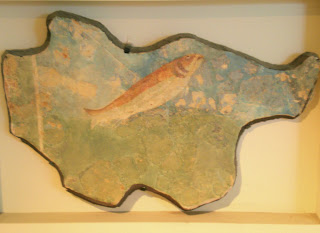 Down a level, and pride of the medieval floor is this wonderful 13th century moot horn decorated with four rampant lions and two standing bishops. 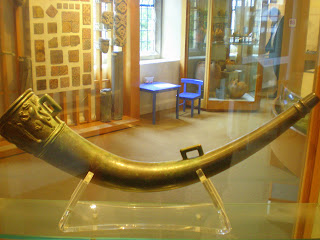 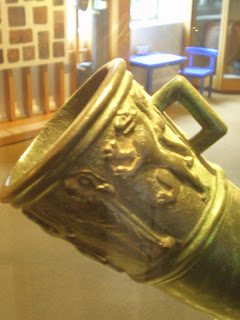 It's been proven beyond doubt that it's the real thing, used to summon folk to assembly. A replica is still used each May at the annual mayor-making ceremony, but the original sounds very well indeed. As Tim Norris of the museum staff has proved in a recording featuing its four true notes (B below middle C, B an octave above, F# above that, and a top B above that). Helpfully, you can hear his artistry while you look at the precious object.

In our short time walking round Winchester, I had one objective, having been advised to search out a little curiosity of a church. St Swithun sits modestly above the 14th century Kingsgate. 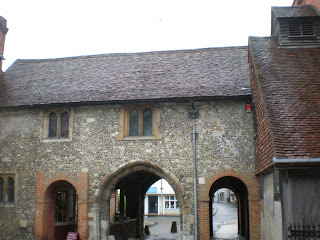 It's approached by a steep timbered staircase 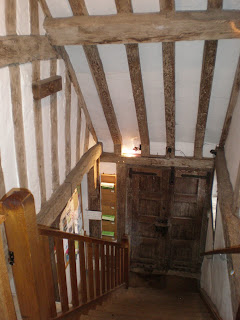 and its interior, capped by a single-framed roof, is simple but obviously cared for by its devoted congregation. 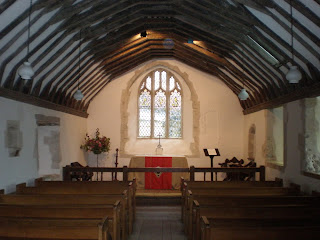 Fragments of 15th century glass from St Peter Chesil grace the east window. Here's an angel to add to the collection. 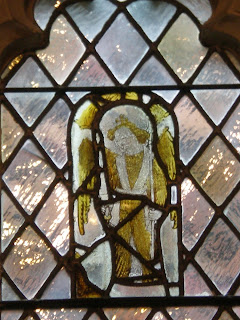 As for the Cathedral, we need to go back and spend enough time to get our moneysworth (memories are hazy; I last visited as a child). Admission fees are quite steep, but there's a lot of upkeep involved, and you do get to see the library too. All this, in less than an hour from central London.
Posted by David at 10:16

David: You give your readers so many gifts, not only your musical insights, founded on a vast store of knowledge, but also these wonderful travelogues (I shall never forget your description of of Darwin’s Down House). My list of things to see and to listen to grows ever more luxuriant, no small thanks to you.

I hesitate to burden your lovely post with an aside, but I must thank you for your comment at PD & let you know that it was your alert about Antique (and admonition about Bostridge) that led me to search further for the piece that now ends my own post. I love the Britten pieces that I know and am thrilled to have the benefit of your insights and recommendations for more to explore. Speaking of your insights/recommendations, finally today, Hallelujah Junction has arrived!

Thanks, Sue: this is what it's all about, isn't it, not self-promotion (if a bit of that happens incidentally, so be it). Likewise the graciousness of a fellow-blogger. I do especially love the connection with folk in other worlds and timezones. More birdshots, please...