Volubilis: an outpost of empire 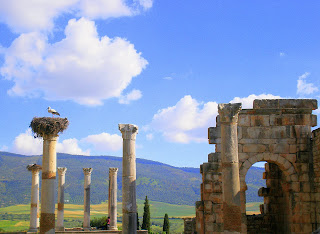 Sites, shmites: it's easy to become cynical about yet another tourist-attracting antiquity. Actually, when I come to think about it, those that have been worth running varying degrees of the fairground gamut to see are more numerous than I'd casually remembered: the pyramids and sphinx, Ephesus, Nemrut Dag, the Acropolis of Athens, Persepolis, Tyre, Palmyra, Qalaat Samaan, Petra, Thanjavur...probably I've left something spectacular off the list. The point is that Roman Volubilis, about which I'd heard nothing before we went to Morocco, wasn't high on the list: the feeling was, we're in Meknes, we ought to go. And it turned it to be one of the most breathtakingly-located, mosaic-rich set of ruins we'd ever seen. 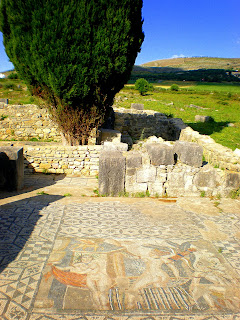 The rains had brought the flowers out in abundance, of course, and even the edge of the site looking over to the basilica and forum was a wonder to behold. 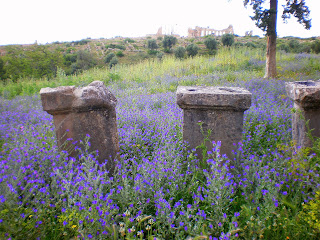 The ruins are spread out on a ridge above the high and fertile Zerhoun plateau. 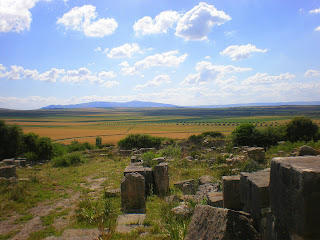 Above are abundant olive groves and copper-rich hills forming an amphitheatre, in the middle of which nestles the shrine-town of Moulay Idriss. 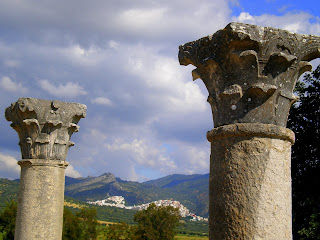 Volubilis may have been a Berber settlement before the first century BC, when the Romans arrived. Its era of prosperity began when Augustus gave the combined kingdoms of Mauritania and Numidia to the Berber prince Juba II. So Volubilis became the seat of the provincial governor of Mauritania Tingitana (love that name, comes from Tingi which was the original name for equally influential Roman Tangiers). It exported wheat and oil - easy still to see why - as well as wild beasts for Roman games. And just as Lebanon was all but stripped of its cedars to provide timber for ships, so ancient Morocco lost its lions, bears and elephants. They became extinct in 200 years, about the length of the Roman rule here. After it, the mixed population continued to speak Latin well into the seventh century. The city was all but abandoned a century later, with the coming of Islam, and plundered in the eighteenth, when Moulay Ismail plundered the site for its marble. 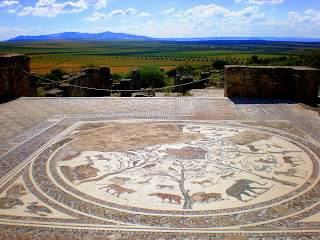 The animals are at least depicted in what for me is the most charming of the many mosaics which still preserve their brilliant colours in full sun and are subjected to only the minimum of cordoning-off (we saw not a single guard, and 1990s plans for expansion with a new museum and visitors' centre seemed to have come to a full stop). The so-called House of Orpheus is a sizeable mansion, formerly of three storeys. Its finest floor has a design I'd want in my own palace: the great musician at the centre, taming the birds and beasts who radiate outwards from the centre. 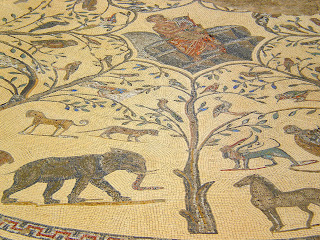 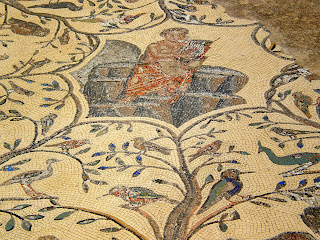 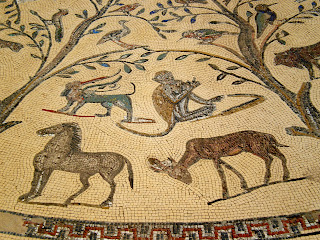 There's also a more basic, black and white marine picture with a stocky Amphitrite in a chariot drawn by a sea horse and sundry exotic sea creatures. 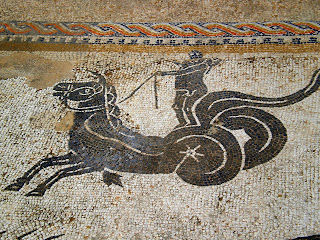 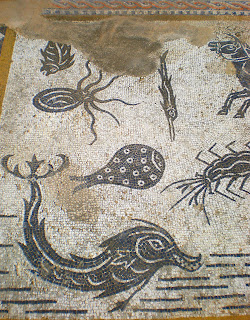 The prospect of basilica, capitol and forum then leads you forward - as do the storks nesting peacefully on several of the columns, unperturbed by the sparrows which flit noisily in and out of the twigging beneath them. 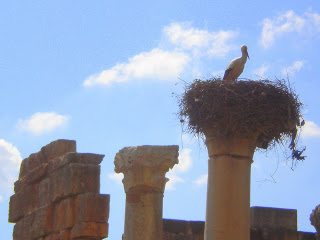 The complex here seems to have been rebuilt in 217 AD during the reign of the African-born Emperor Septimus Severus. 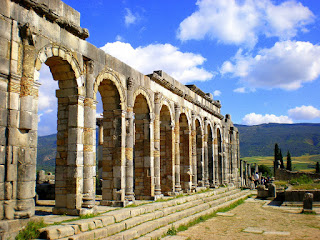 The path then leads onwards to a triumphal arch erected in the year of Caracalla's death. It would have been lavishly adorned with statues, many of which along with bronzes which give their names to some of the houses have gone to the museum in Rabat and seem, given the present building lethargy at Volubilis, unlikely to return here in the near future. 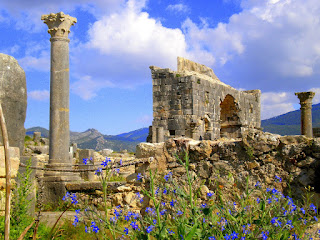 The Decumanus Maximus which rises upwards from the arch is lined with many of the more prosperous residences. Most of the mosaics are slightly crudely executed - especially as compared with those in Tunis's splendid Bardo Museum - but the colours, where not over-restored, are very jolly. Bacchus discovers a half-lost Ariadne in the Knight's House 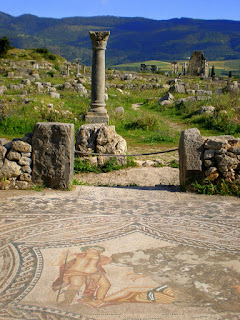 while the labours of Hercules are portrayed in roundels to the north and there's an even finer mosaic of Bacchus flanked by the four seasons (only two of them reproduced in full below) and with what is - I think, but the guidebooks can't reach a consensus about this - a Bacchante beneath him. 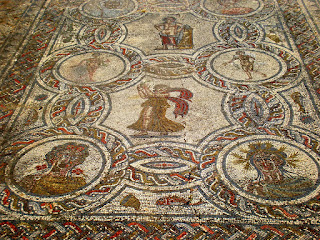 The best-executed mosaics are on the other side of the Decumanus Maximus, in the House of Venus. In the most celebrated of them, Diana is discovered at her bath by Actaeon. 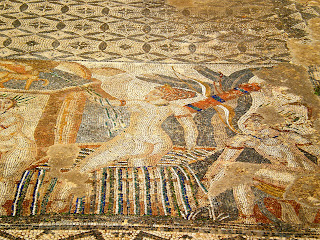 The surprised nymph on the left and the love-goddess's Roman hairdo are marvellously executed. 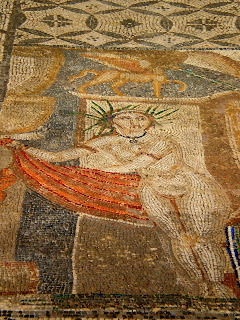 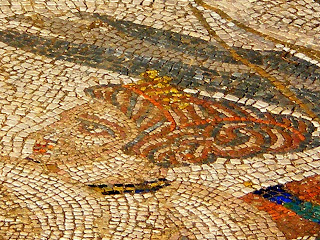 And in the next room, Hylas is captured by frolicking nymphs. 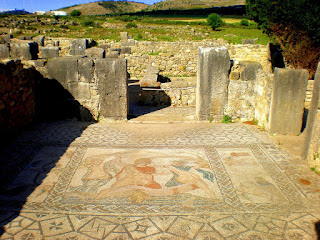 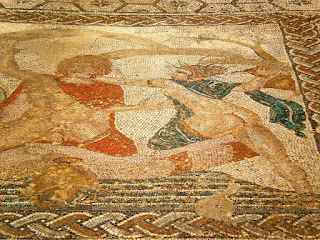 No doubt more will come to life if the indolent archaeological team can get its act together. But it's a wonderful site to spend an afternoon strolling around, and it certainly wasn't swamped by tour groups when we went. By 5.30 when I returned to the capitol, there was just a handful of visitors and the stork welcomed her hunter-gatherer mate back to the nest. I missed snapping that, but here she is anyway looking haughtily at a cheeky sparrow. 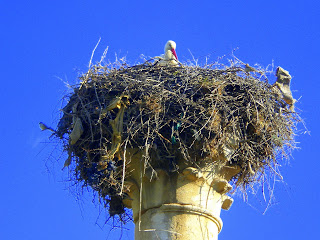 There was no time to stop in Moulay Idriss, other than to take a view from above of the camel-humped town with the mausoleum to Morocco's influential sultan-pioneer of Islam in its dip. 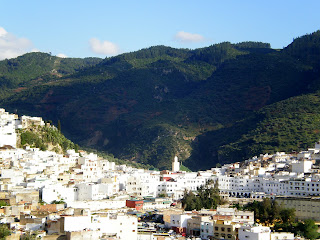 Then we sped back to Meknes to enjoy the early-evening entertainment on the square.
Posted by David at 11:49

Hi David .. absolutely brilliant - fantastic photos .. and detail .. loved the whole thing .. and if I was free .. I'd be on a plane tomorrow .. evocative and so drawing me in ..

Fabulous .. so pleased I read it .. thanks for telling us about it .. Hilary

Thanks, Hilary - actually, as I looked at the photos, I thought, this place is even more incredible than I thought it was at the time. And it was a happy, amazed afternoon. I can only think of one equally beautifully placed site, Simeon Stylites's place in northern Syria mentioned above. And that was special because we saw not a soul the whole time we were there, only wild rabbits.

Hi David .. I need to spend some time at your blog - not something I have much of right now ..

I hope the Syrian one survives - can't believe how many buildings, temple etc have been destroyed in recent years.

Both places must be stunning - they certainly look it .. those mosaics are to 'die for' ..

thanks for replying so quickly .. cheers Hilary

PS Many of my readers would love your blog and info .. if you have leanings in getting more readers etc .. ?

And compliments again, with a 'whatever', if that doesn't sound too rude. I know there are bloggers who go a-hunting punters, and while I won't pretend I don't like a bit of extra attention, I don't go out with the aid of Facebook or Twitter; life's too short.

The motto has to be 'let those find it who will'. A little extra help always welcome.

What a beautiful place. The mosaics are stunning. Of course, I love the stork in the nest, as well. (And a propos of that, on your comment over at RA--I did wonder myself if I got it right on the heron, though I think it's the most likely bet. I don't think storks are found in my area, though I don't know for sure. As you say of storks, I was amazed, on seeing and photographing herons at closer range, how they, too, had a "pterodactyllic appearance.") But, as I said, this is all an aside to your gorgeously illustrated post. Morocco, it appears, must go on to my travel list--though not before I finish your Prokofiev book, which I'm quite enjoying, by the by, though I wish a I had a keyboard on which to play out the score excerpts!

I think I ought to apologise for doubting your blue heron - that's my own insecurity when it comes to birdspotting. Looked at photos and suspect the feet are the giveaway. So not a stork. Could have done with your shutter-speed for the flights of storks, white birds with black feet etc all day over Meknes.

We're lucky to have herons by the score along the Thames now. And there was one in Regent's Park on Sunday, quite impassive to all the squawking of angry ducks around it.

What a gorgeous place. Thank you for giving us such a beautiful glimpse of it. Seems the stork has the most commanding view of all!

Thought this was deja vu - then realise Google must have wiped a host of comments which were there before. All this during the crises when this part of the site wasn't available (just as well I've been away again or I'd have been tearing my hair out at lack of access).