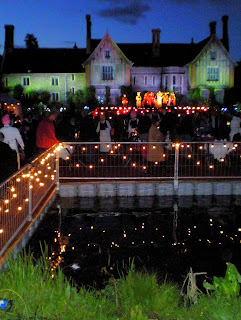 Dining with Alice was the focal point and original purpose of our two days in Norwich, though it was bracing to crack the nut of at least a handful of city churches, and no doubt Moroccan-tumbler-team-in-artshow Chouf Ouchouf, which we caught in the Theatre Royal, outstripped the dramatic side of the Wonderland experience.

Yet strange and disconcerting, at times, Alice certainly was, and impeccably handled as a logistical nightmare of what has now become hugely popular as 'site-specific theatre'. Let's not forget that the Bubble company got there first, and my benchmark for wanders around old houses and through park and woodland with a purpose remains their Chiswick House Midsummer Night's Dream (Through the Looking Glass in Greenwich Park running it a very close second). Dining with Alice's motley crew of Carroll characters and their random knockabout couldn't compare, but maybe that's not the point; this was chaotic and without the logic a more prominent Alice would have brought to it, and no doubt deliberately so. In terms of the 'script', I can only agree with the shrewd theatre critic who turned up on one of our tables, Susannah Clapp, and her comment in yesterday's Observer that 'it is too light on incident and too leisurely always to capture the disconcerting jostle, the eerie fright of Carroll's nonsensicality.'

But I haven't explained the setting or the concept. We were bussed out from Norwich in the company of Mad Hattered youth - some, perhaps, encouraged by the sellout Punchdrunk experience - to Elsing Hall, which as you can see from the above is a (much-restored) 15th century house in the country. The show is the enterprising Artichoke's resurrection of a 1999 hit at the Salisbury Festival, presumably much re-adapted.

I'm told I should put in a *spoiler alert* here for anyone who's going and wants to be surprised. If not, read on. Next two photos, more people-friendly than mine, are by Sophie Laslert for Artichoke. 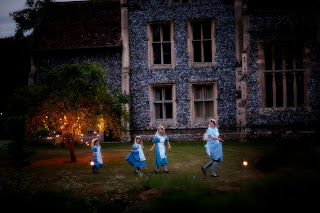 You walk through a formal garden with a darting Alice and a wood with amplified sounds of peacocks, crows and unidentifiable birds to a marquee where you quaff gin and ginger ale. The show begins. The actors spout some slightly alienating, half-Carrollesque nonsense. It's the melee of the two Alice books I always get a bit hot-under-the-collar about. But no matter; the tale isn't being told and Alice only pops up at a late stage to protest at her own inventions. I would have liked flamingoes and hedgehogs on the croquet lawn, though, Humpty Dumpty perched on the wall above the herbaceous border and perhaps a helium-filled Cheshire Cat. But that's my production, not theirs. 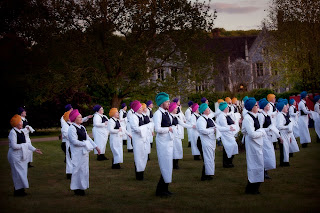 A gong sounds. 56 waiters in turbans of diverse colours come to lead the 240-odd guests to separate tables. That's right: one per person. It's like the Mad Tea Party - so many places laid, the visible guest at one end - except for the fact that you're completely on your own. 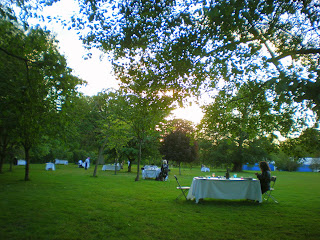 Solo musicians serenade you with assorted Victoriana: a viola here, a cornet there, sometimes counterpointing in Ivesian manner. The nine characters dart around, declaiming their little set-pieces. You're not really supposed to interact or comment; largely they ignore you, though when I asked the Duchess if I'd change shape on drinking the little phial, she managed 'I do hope so!' before bustling off. 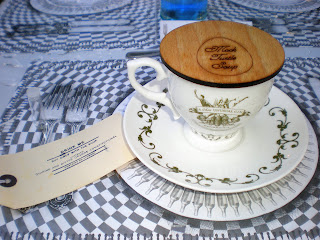 The mock turtle soup, not what the Victorians made of it which was a calf's head dressed with condiments and sauces to resemble a turtle (which is why the creature in Tenniel's illustration is a combination of the two), consists of 'potatoes, olive oil, onion, watercress, spinach, vegetable stock, lemon juice, perfumed quail's egg [which I took up expecting to bite into a radish], basil seeds, nettles'. It's accompanied by the 'drink me' phial of quinine and bitter orange. 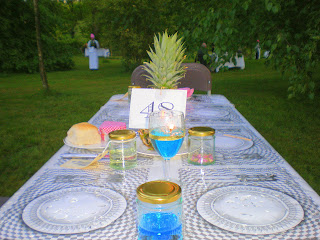 Gong sounds again. Your waiter leads you to another table under the trees (this one I liked, overlooking a grand old oak, though truth to tell it was cold and damp, Norfolk having that afternoon experienced its first downpour in months. But beautiful skies atoned). I think the idea was that the table should be for two, but I was still alone, which I didn't mind at all.

Third gong. This time we reached the walled garden, and our nearest and dearest fellow guests. Cue one more Laslert/Artichoke shot of the White Queen (Tamsin Dalley) accosting diners. 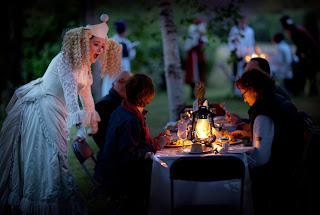 There I found J and our Norwich friend Kate sitting ready to share an excellent Holkham Pie. This is where Susannah joined us. Queen of Hearts and White Rabbit had an unseemly spat before us. 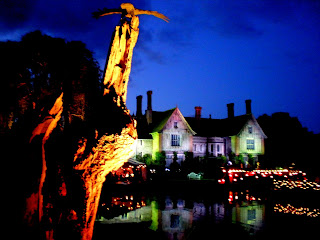 Fourth gong. Now the real magic began: lights everywhere as darkness fell, not least across the waters of the moat as we all processed to tables on a pontoon. There we watched a masque or divertissement of the Alice folk played out on a stage in front of the house. 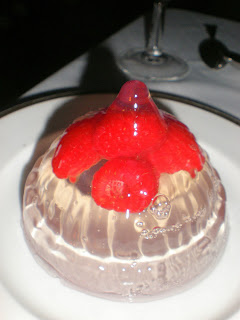 Surely that's the piece de (non) resistance of Bompas and Parr's food experience. And it was just as well we were all so chilled in both senses now, because the entertainment went on at purposefully purposeless length. We all sang 'Come into the garden, Maud'; a (deliberately?) banal setting of the spider's invitation to the fly went on for ever; we liked the White Rabbit's idea of a good trick, pulling a man out of a hat; and a raucous screechfest was terminated by the five Alices, who like the waiters had not perhaps played as big a part as the flagging up of local involvement might have suggested. Here's a final Laslert/Artichoke shot of Queen of Hearts (Di Sherlock) and Duchess (Heather Keen) in full vocal flight. 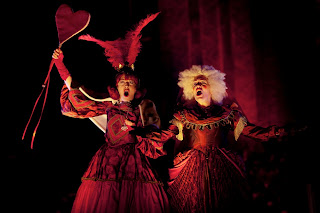 And so back on the bus after a chat in the field with Susannah and Lyn Gardner, who saw the original back in 1999 and thought some intimacy, but not the splendour, had been lost on this occasion. As for me, well, I gave up on the expected telling link between book and drama, and eventually succumbed to the weirdness of it all. One fact will surely be true for all: the experience will stick in the mind long after more shapely and better-performed theatre has vanished from the memory.
Posted by David at 09:56

(Re your question over at RA: while we're ending the collaborative, it's not necessarily the end of everything, and certainly, your comment provides encouragement for continuing in some fashion. Contemplating a "next act" as I write.)