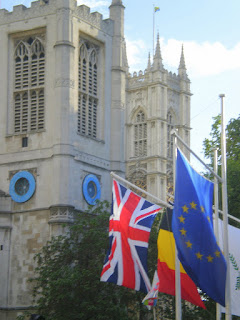 No. 10 Downing Street, it was baldly reported, wouldn't be waving the gold stars on the blue background, as apparently it had under a different regime the previous 9 May; only Vince Cable's lot would set a good example. Cameron's cravenness seemed to be a concession not only to the anti-European wing of the Tory party but also to those dismal organs of supposed popular opinion the Express and the Mail. Not to mention the thousands, it seems, who hate the idea of Europe so much they want to put a bomb under the European Commission Representation in London (as gleefully reflected in a dodgy Telegraph article which I won't give the benefit of a link).

Fortunately, I'm told, the Europe Day celebrations in St John's Smith Square, which has Europe House - the former Thatcher HQ - as neighbour, were marred last Monday by not much more than a stink bomb. I was far too Fotherington-Thomas in mood to notice, having skipped down Whitehall after my first Verdi Macbeth class looking for blue flags, not finding one but then coming across Parliament Square, where Westminster Council had done the 9th of May proud by flying the banners of all the member states as well as their symbol of unification. And how good they looked in the declining sun of a perfect Spring evening. 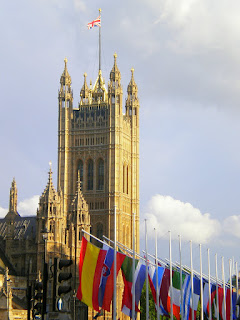 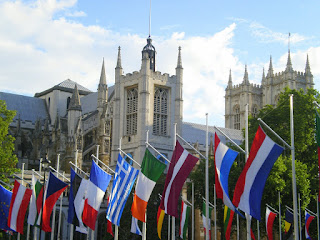 The light was also picking out the tower of the original Westminster Abbey, so often overshadowed by the Wren-Hawksmoor west end: 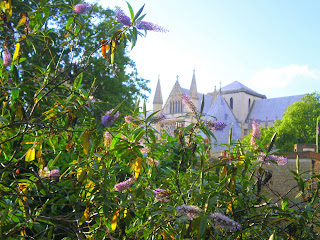 And so, past the Slovenian Embassy proudly waving the blue-and-gold as it always does, to Smith Square and its upturned footstool. 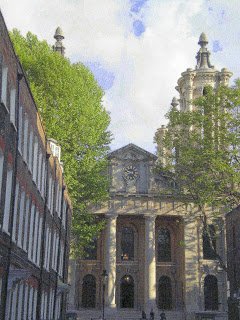 Very well, so Dickens thought it was some 'petrified monster, frightful and gigantic, on its back, with its legs in the air', but I like it and have so many fond memories of fine concerts there. The Europe Day concert, performance-wise, was certainly in that happy league, and the 13-year-old Liszt's one-act opera Don Sanche, wisely abridged for the occasion, occasions a bit more than amazement at the competence of its young master, chiefly a memorable tenor aria which I reproduced at the foot of my Arts Desk 'buzz' piece about the event and am happy to regurgitate here. No credit's given to the tenor, but he's good.

Catchy, no? More so than the duffer output of Donizetti, at any rate. For more detail, see the TAD article; I'll leave you with a shot of the excellent young soloists from the European Opera Centre along with the beaming players of the European Union Youth Orchestra - whose cellos and basses found fun even in their endless V-Is - conducted by Laurent Pillot (no, I wasn't snapping during the performance; this one's a publicity shot commissioned by the hosts). 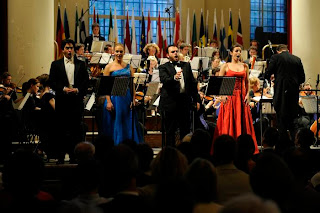 Worth reporting that, although I don't much like standing for anything except a great performance, the EUYO's pure rendition of that orchestral portion of Beethoven's Ninth Symphony serving as Europe's 'Ode to Joy' brought many people not only to their feet but also to the brink of tears. Not me, but still I could see the good in welcoming an anthem that celebrates not narrow nationality but universal brotherhood.
Posted by David at 08:53

I promised myself I would stay off the internet for a while starting today. Must make good on that tomorrow, for sure . . . For now, I couldn't resist your post and that great tenor singing a catchy tune by a 13-year old Liszt (somehow I've not associated catchy with Liszt in the past!). Have just finished your Prokofiev and have so many page flags of things to go back to that the book might qualify as decoration on Europe Day.

It's a healthy resolution to stay away from the internet but oh, so hard. I did manage it for all ten days in Morocco but my fingers itched.

Hope for your own well-being not to see you back for a day or two...and so honoured you read the book.

Last year a girls' school ( teenagers) planned an experiment. For two weeks the class would not use their mobile phones, but keep a diary as to how far they found themselves constrained

The experiment started on a Monday

The Euro-skeptics are not Euro-skeptics, they are anti-Europe. Too late, too ignorant of reality. One hopes that they will die out

The extreme but widespread Euro-philes are dangerous as they take decisions to put in place building blocks as part of their plan for a united Europe, without considering the validity of those building blacks in themselves. The superficial delusions uttered by otherwise admirable people at the time of the creation of the Euro are perhaps the best example of this set of foolish and indeed religious beliefs

One should be pro-Europe but careful ( indeed skeptical if that word had not been abused) about individual decisions.