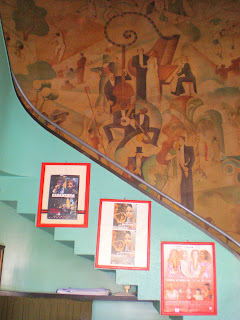 Say what you will about French imperialism in north Africa, but the so-called Protectorate in Morocco left a certain amount of what it found untouched. Thanks to Resident-General Hubert Lyautey's 'do not offend a single tradition, do not change a single habit', the old ways carried on alongside the new. In Meknes this means that for the flash, be-blinged 4x4-driving Moroccan nouveaux riches, the Ville Nouvelle is the place to go for cafe and nightclubbing life, while the medina on the opposite hill, separated by the valley with the Oued Boufekrane flowing (if that's the right word) through it, carries on an existence largely unchanged since the middle ages. This is the view of the medina from the newly-developed park slopes above the valley. 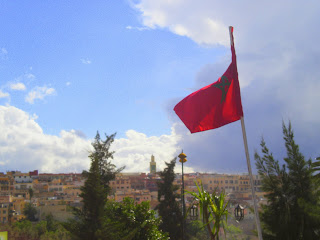 The other result is that the tourists ignore the Ville Nouvelle other to eat and drink there. Sadly the Moroccans have rather neglected it, too, which is a pity, because it's a treasure-trove of 1930s architecture falling into disrepair. In any other city where this was the only asset, it would be assiduously preserved and guided tours would be taken around its gems (think of Tel Aviv, or wonderful Asmara, capital of Eritrea, where the experimental architectural projects under Mussolini are a major draw). But at least it's still here, and very much the centre of attraction off the central roundabout is the 1930s Cine Camera, still a working picturehouse. 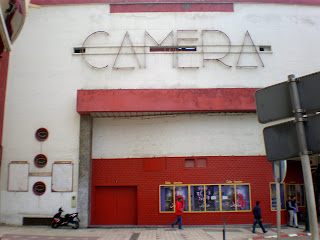 Had it not been for an excellent illustrated French guide to the town loaned us by Mouna and Simon of the Riad Lahboul, we might have missed one of the great artistic treasures of Meknes, one Marcel Couderc's 1938 fresco in the foyer, for neither the Rough nor the Blue Guides mentions it. The eye is drawn up to the central panel of opera singers, pianist, string players (love the double-bassist) and jazz band. 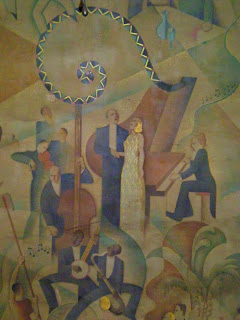 The details are no less charming on a close inspection. There are selective glimpses of Paris 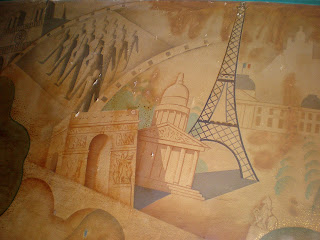 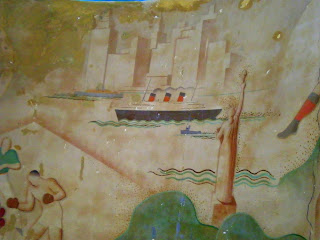 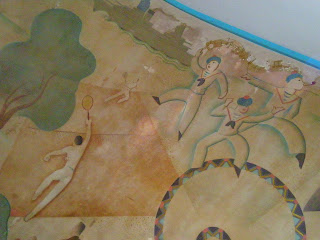 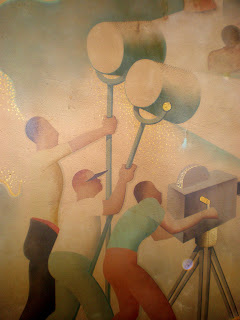 and fashion - dig the chap in his plus fours. 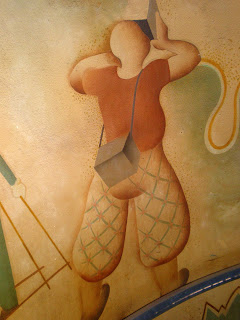 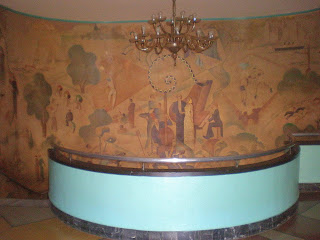 even the wall above the projection room is duly adorned. 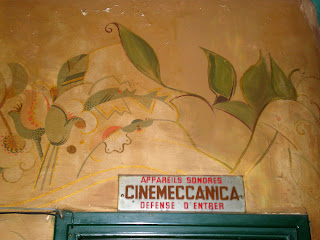 There's been a fine book produced on the 1930s architecture of Asmara, but I couldn't find much on this - it all needs documenting by an enthusiast of the era. And I'm told Tangier and Casablanca have just as much to offer.
Posted by David at 10:12

Politics ( any exceptions? )
Economics ( except Keynes)
Military science ( except Liddell Hart and Fuller, and Guderian)

It was a sort of scherzo between the main movements. However seeing these frescos ( and looking at the art and architecture) make me feel that there were some aspects of the period which were coherent. Not sure of how far art had divorced itself from the rest on society's activities

Interesting. But it already seems nostalgic for the late 1920s and early 30s, don't you think?

There were some great interwar symphonies and operas, at least. And novels...but now I've started I can't stop.

Art ( broadly defined) often - usually - reflects society's characteristics as a whole ( the decline in taste in the late 19th century for example: sentimentality, obviousness, romantic unintellectualism, etc etc). And, also often, it foreshadows future developments: Picasso for example - " when I was young I painted like Raphael" - whose rejection of the realistic or impressionistic pointed to the more general dissatisfactions of the 20th century ).

I am not clear as to my final thoughts on this, but perhaps art in the thirties was foreshadowing the evolution of society into the new paradigm. Which would indeed have evolved if Hitler had not declared war - and no one else would have done so ( not Goring, not Stalin etc). The second world war was not a natural part of the evolution of societies world wide but an intrusive event by one individual, a world historical looney; unlike 1914 when the vials of wrath were full - and it was Kismet.

Art in the thirties could on this basis be a foreshadowing of how things would have developed if it had not been for Adolf. An interesting line to study, though not easy to elaborate

But take Russia: up to 1932, a reasonably healthy evolution of Art for the People in which most of its proponents believed (and which threw up an incredible avant-garde). And then it was certainly 'one historical looney' who bent it out of shape.

I would rather say that the Russian revolution from the beginning was led by a party which held that ( in the words of Lenin) "the revolution can only be achieved by dictatorship and terror". The slightest opposition was ruthlessly eliminated. In the five years before Lenin's death, 200 000 were executed ( compared with 14 000 in the fifty years before the revolution). The terrible regime, awful in every way, was established under Lenin and would have continued under other leaders had Stalin never existed. His contribution was to impose additional horrors, even on his colleagues,but unlike Hitler he was part of a process which existed independently of him.

I was wondering if one could speculate as to the sort of trends which would have become dominant ( in the arts but also more generally) if the second war had not occurred.

Having studied the period between the wars from the political point of view, I confess to not having realised that there developed in Russia the avant garde achievements that you mention. It was the policy of the regime to control everything in the pursuit of the dictatorship of the proletariat ( identified with themselves), but maybe it took time for this policy to reach at least some of the arts

Yes, I've heard you on that before, and politically it is no doubt true. Yet the arts flourished - at least up until 1932 - in an way the wider world knew little about until the likes of Sheila Fitzpatrick and - taking all the glory, quite wrongly in my opinion - Orlando Figes enlightened us.

What a brilliant find! I do hope the cinema finds a protector to keep it safe before it's too late.