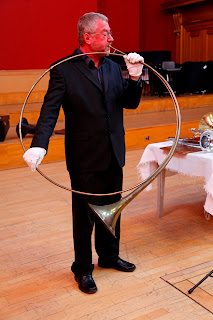 Two Tuesdays ago we were delighted to welcome back to the BBC Symphony class Chris Larkin, veteran of the orchestra and master expounder of the instrument's historical metamorphoses, who usually brings along more than your standard state-of-the-art double horn. In fact you can hear him twice at the Proms in unusual roles: he'll be playing the cowhorn in Britten's glorious Spring Symphony and the natural horn in John Eliot Gardiner's performance of the 'French' Freischutz, with Weber's romantic mastery meeting Berlioz's specially composed recitatives.

Fortunately, perhaps, I can't regurgitate horn history at length since I left my notes at the City Lit, so that will force me to concentrate on essentials. The cowhorn, of course, had to be the starting-point: Chris brought along a smaller model than the specially-made one for the Britten pictured, I think, below, in a Reid Hall lecture-recital he gave recently, and produced such a warm, resonant sound from so tiny an instrument. 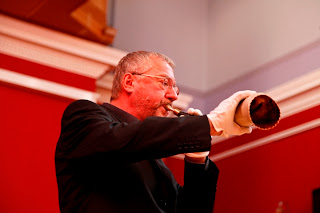 Chris has a theory that the Vikings used cowhorns on their boats to call to each other through the fog; though I associate the instrument with peaceful practices, and in fact there's a wonderful YouTube clip of a Swedish exponent playing an almost sax-like 'Summertime'; shame the film's beyond the pale, but the sound is good.

We didn't have at the City Lit a trompe de chasse of the size illustrated up top, but the next best thing: a natural horn of the mid-18th century. The French hunting horn is alive and well in numerous traditional ceremonies; Louis XV had his own master of hunting music at Versailles, the Marquis de Dampierre, whose fanfares for various types of hunt still survive. 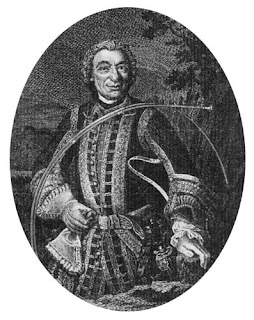 Here's Chris at the Reid demonstrating one of Dampierre's compositions on a trompe Dauphine (misnamed slightly because Louis XV's first son wasn't born until a good few years after its invention) of 1721.

Even stranger are the Russian horn orchestras which date back to the time of Elizaveta Petrovna in the mid 18th century. The idea is that each 'tube' plays a single note, the equivalent of a handbell orchestra. Listening to it on CD, you wouldn't know, and you might question any validity beyond the historical. But anyway Sergey Polyanichko has revived the tradition with his Horn Orchestra of Russia - not surprisingly given the current state love of pomp there - and his 20 players wield 74 'notes'. Enjoy this selective take on Rossini's William Tell galop.

I had my own unexpected lecturing excursion last Wednesday when I went to Eton to talk about Prokofiev to an extraordinarily motivated group gathered at precentor and music director Ralph Allwood's home: the Parry Society, no less. And pre-empting some of the stroppier commenters here who got into a lather about public school folk at university some while back, and who might ask what an upstart grammar-school boy was doing swanning so happily around such a hothouse for many of tomorrow's leaders in arts, sciences and politics, all I can say is that curiosity and character cross all divides, and this lot had it in spades.

Here's a reduced line-up taken a few days later, since I forgot to snap at the time. The movers and shakers are 'sir' Allwood on the sofa and, to his left, Edward Picton-Turbervill, the enterprising Etonian who booked me on a sup-and-speak basis a year in advance having heard me talk on Salome at the Royal Opera. 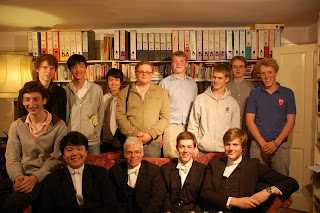 As for the talent, ma foi: all I'll say is that I heard a chapel organ improvisation (very Messiaenic) which knocked me for six. But I suppose it's to be expected when the music facilities include no less than eight of those instruments on the premises...
Posted by David at 07:33

I wonder if the title Trompe Dauphine might have been chosen in memory of the wife of the ( originally Petit) Dauphin - the Duke of Burgundy. They both and the Duke's father the Grand Dauphin ( and his wife) all predeceased Louis XIV, so neither became king, only Dauphin. As the Duchess of Burgundy died in 1712 (as Dauphine), this was not long before the composition of the piece. She might well have been remembered in this choice of title, especially as (unlike the marriage of the Grand Dauphin) hers was a happy marriage and she seems to have been an attractive personality, very much liked indeed by Louis XIV. Moreover, as she was the mother of the young Louis XV ( 11 years old in 1721) it would have been a tactful title to choose.

Plausible: there's nothing to contradict your thoughts in the very limited literature. Presumably it's 'dauphine' to agree with 'trompe'; the (petit or grand) Dauphin might also be the subject. Our hornmeister may chew it over.

I think you may have got the answer. The Grand Dauphin ( died 1711) was a passionate hunter - and as far as I can see on a brief survey the others concerned were not hunters to the same extent. The GD would have been in the minds of everyone involved in the royal hunt for some years after his death

niketopoulos: I was about to answer that as best I could when you removed the comment. Anyway, here's the question: 'i have a question about the cow horn for britten's spring symphony. thank you for the photo. i haven't seen the score yet, but i did hear a recording. i have a shofar pitched in the right key, but it's an octave higher than the recording. (it's a little shofar!). do i need to find a bigger horn? does britten specify the octave he wants in the score? i suppose the high horn would be the totally wrong color... nwell, anyway, thanks for your advice!
rachel.'

And all I was going to say was that Britten pitches the note as middle C in the score (with grace notes above and below it). A big shofar would surely do. The sound needs lots of resonance, so probably the high horn wouldn't be the right colour. Hope that helps, if you're still looking.