From the cliffs of Moher with their shale and sandstone 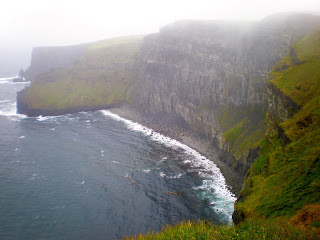 across the grikes and clints of the Burren's limestone pavement 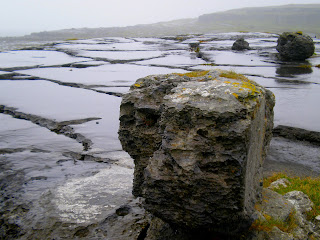 where it meets the sea above Fanore 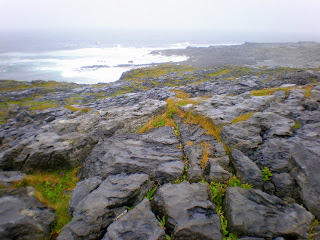 to the beaches of Connemara, defined by Wittgenstein, who spent some time there trying to throw off his mind-forged manacles, as 'one of the last pools of darkness in Europe'. A greater authority than I pre-empts the need to sum up this unique region of lakes, bogs, mountains and sinuous coastline as anything more than one of 'great geological complexity', though the distant bulk of Mweelrea in Mayo is a primeval mix of sandstone and ignimbrites (ie volcanic rock preceding the Ice Age glaciation of Connemara). 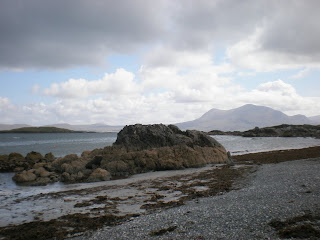 This last was our ultimate destination on a meandering, mostly coastal route from Shannon Airport, which I bravely - and mostly pleasurably - drove after a couple of years away from any wheel other than a bicycle's. I can't really recommend the Moher experience unless you've never seen big cliffs before; it's like the Land's End ship o'fools except that you can't carry on walking away from the hurly-burly as the coast path either side of the over-signposted and gravelled routes is privately owned (where was the National Trust when Ireland needed it?) But I can't wax lyrically enough about the Burren or Connemara.

We ended up enveloped by the relaxed country-house environment of the hotel at the end of the Renvyle peninsula for the two-day nuptial celebrations of our lovely friends Gwendolen (Welsh pa, Irish ma) and David (of the Darcy tribe of Galway). 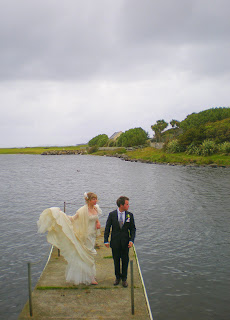 More about wedding and ceili(dh) anon. I just want to take one step further north, as we shall do more extensively, and at greater leisure, when we return, to the most majestic stretch of all: Ireland's only fjord, Killary Harbour, sundering the sandy beaches and gentler inclines of north Connemara from the dramatic mountains-to-the-sea of Mayo. The water gets progressively deeper from sea to harbour, which is why - we were told by one of the local wedding guests - German U-boats used to lie low there. We parked the car by a farm on the south side and just walked along a track through the lush sloping fields of Foher townland, decimated by the famine; it all seems so gentle and welcoming in late spring that it's difficult to picture the hard life. 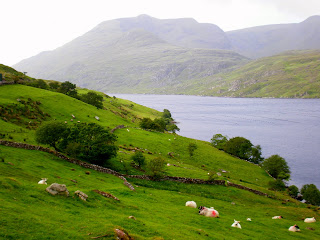 The depths of the fjord make it perfect for mussel farming; birds had scattered shells along a stretch of the path. 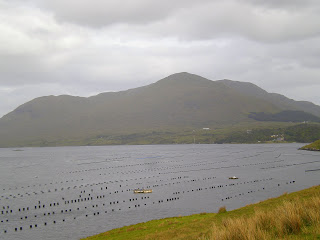 Connemara sheep aren't your usual timid breed: they eye you inquisitively and unflinchingly. And I know, from the wedding banquet, that Connemara lamb is the best. 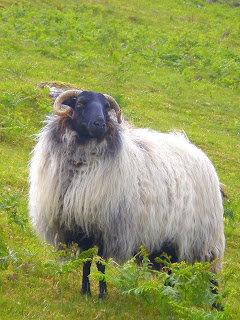 With all too short a time between wedding events, we came closer to the imposing rocks of Mweelrea, rising to 2688 feet 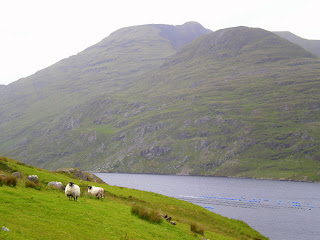 and turned a corner to look out to sea 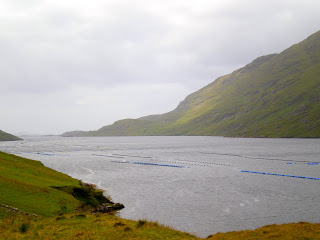 before returning to the next stage in the festivities via an insanely beautiful route along Lough Fee. 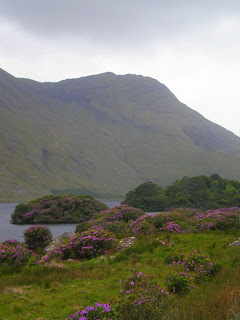 The invasive rhododendron, along with the New Zealand flax, is an import by the Mancunian who built the huge pile of Kylemore Abbey, but so long as it can be kept in check, it does provide splashes of colour in the landscape. This from our last day, when the progress from rain and wind to mostly-sun was finally complete. 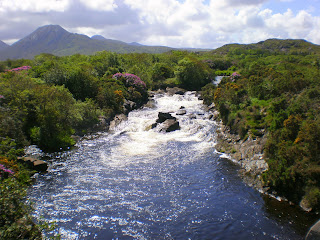