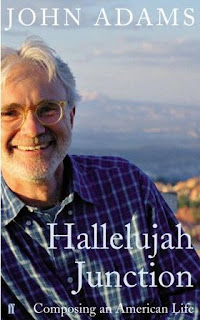 For many folk I've spoken to, Alex Ross's The Rest is Noise has become a bible of information about 20th (and 21st) century music. It's extremely well-written if necessarily biased towards what the author likes, to judge from what I've dipped in to (what, not a word about Jimmy MacMillan?), but for authenticity it can't beat John Adams's autobiographical journey through the thickets of what he calls 'the partisan orthodoxies and prejudices that dominated my generation'.

Yes, he was there when Boulez ruled with his dogma, 'a technocrat bristling with all the gleaming armaments of his specialized field'. He was bewitched by the freer experimentation of Cage and company: was it any more than 'Dadaist doodling'? Much more, he fairly concedes, but judiciously lists its limitations. He was engaged by the promise of minimalism, describing Reich's early work as 'a sound world that was carefully organized, musically engaging and sensually appealing...To me, it felt like the pleasure principle had been invited back into the listening experience'. The cabin'd aspect of minimalism, Glass's static brand especially, is then tactfully touched upon.

But Adams was also beguiled by the best of the popular music of his time, by the revelation and the long-term promise of Wagner when driving along listening to Act 1 of Götterdämmerung, and later by Peter Sellars's eclectic knowledge of musics outside the 'western hegemony'. The book also offers lucid clarification of the issues behind his operas, from Nixon and Mao in '72 through the Palestinian problem to a terrific exposition of nuclear power and the diverse branches to the basic Indian spiritual fairy-tale of A Flowering Tree.

If you don't think you have time to read the entire book, the short last chapter, 'Garage Sale of the Mind', is the best ever precis I've read of the crossroads at which we now stand, the notion that complexity isn't necessarily progress but that easy promise isn't the solution either. This fits with the swivels of his own all-embracing musical language: the other week I reeled again at the daring, gnarly counterpoint of his Chamber Symphony in a dazzling performance by the Aurora Orchestra under Nicholas Collon, and loved going back and listening to the CD again. 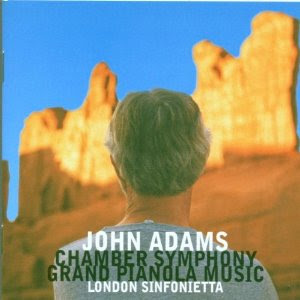 It was looking up what Adams had to say about the Chamber Symphony as a result that finally led me to read the book from cover to cover.

I realise how many of the scores I still need to catch up with: being a bit of a sucker for stylish CD presentation - which in this case sometimes features wonderful nature studies by the composer's photographer wife, Deborah O'Grady - I have to update with the Nonesuch releases following on from the Earbox, including Son of Chamber Symphony. I'm not saying every work is a masterpiece, but it's always engaging, never dull. The world is a much better place for Adams's music.And the wordsmith continues to do good with an inspirational speech to students, reproduced in full on his blog. 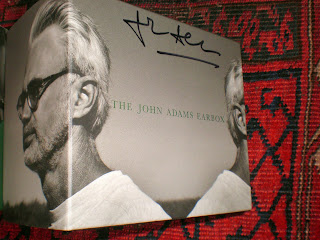 Anyway, I'm proud of my Earbox, which I got the great, easygoing man to sign along with my '88 Edinburgh Nixon in China programme after we'd done a fun talk before one of his BBCSO concerts. And I'm proud, too, that he said to the admin as we came off stage: 'he's really good, you should ask us to do this again'. But that's blowing my own trumpet in the manner of some of my esteemed but not very modest fellow-bloggers...
Posted by David at 10:57

It is a great book, though the first half is better than the last half - Adams is more at home recalling his early life. I still regret not sending a response to Philip Clark's idiotic Gramophone review of the book - I wrote it but then chickened out. Ah well.

I treasure a signed El Nino set - I was about 19 and Adams was in the foyer after the British premiere signing stuff - he went to sign my CD and said 'what's your name?' and I just grinned and stared at him, so he had to ask me again, which was a bit embarrassing.

I had no idea anyone disliked it - JA can sometimes come over in interview as very fixed in what he wants to say, but there's considered clarity here in expounding all the themes. Agreed, it does rather change direction to being a chapter-by-chapter discussion of the stage works to date. But I can't disagree with any of it.

BTW, following up on the other thread, the first night of JA's (and AG's) The Death of Klinghoffer at Opera Theatre of Saint Louis went off without protest. The local paper's review is here, while the New York Times sent a reviewer as well. No security checks or anything like that, although there was a cameraman filming TV footage for the local PBS affiliate.

Along with Andrew, I too now have a signed set of El Nino, as Adams was at the first night and walked on stage to take the last bow at the curtain call.

Does that mean you went to this Klinghoffer, Geo.? If so, what were your own thoughts?

Sorry about the late reply; yes, I did see the 1st night of Klinghoffer. The opera still has its issues as drama, and quite a bit of the music goes rather slowly, perhaps more than is healthy for an opera. However, I'd seen the Penny Woolcock video and heard the CD not too long back, I knew what I was in for musically, unlike probably most of the audience.

To me, given the many pitfalls of the work, the OTSL production probably was as skillful as one is likely to see it. For one, the murder of Leon Klinghoffer was not shown on stage, but symbolically presented at the very start, before the music started. The production struck me as a good mix of abstraction and "Bermuda shorts" realism where needed, with the chorus shifting from being Palestinean refugees to Jewish refugees to being cruise ship passengers very smoothly. They stole the show, in just about everyone's estimation. However, Christopher Magiera as the Captain wasn't far behind in commanding the stage.

I know that ENO is set to stage Klinghoffer next season, so it'll be interesting to see the reaction there. One singer set for the ENO run is in the OTSL production, Lucy Schaufer, who's singing not just the Swiss Grandmother at OTSL, but also the Austrian Woman (done up looking rather like Lauren Bacall) and the British Dancing Girl.

Thanks for that, Geo. We love Lucy! Her performances as the noble, long-suffering secretary in Henze's Elegy for Young Lovers in Fiona Shaw's sensational ENO/Young Vic staging was one of the best all-round performances I've seen of anything. I bet she does a good Octavian, too.

I would have passed this book by, had it not been for you, and that would have been a shame, I see. (I am one who absolutely loved The Rest is Noise--after John Metcalf's generous and intelligent welcoming of me to contemporary classical music, it was Ross who gave me my first road map.) I have heard live three of Adams' operas (Klinghoffer, Atomic, and most recently Nixon in China--the first that I knew, but the last that I saw). I thought all of them exciting and gorgeous works. Adams has his finger right on it, certainly, with "the notion that complexity isn't necessarily progress but that easy promise isn't the solution either." I find the more I listen the more I worry about the need fine young composers and musicians have to try and "cross over." A recent example is the new CD by the Chiara String Quartet of two Jefferson Friedman String Quartets. I find both quartets utterly compelling, but am saddened that they felt a need to include two remixes that, to my mind, dumb down the original compositions. I'll admit, I wear my trousers rolled, but just the same. . .

Interesting you say that, Susan, as we are holding our breath awaiting the premiere of Nico Muhly's Two Boys. The ENO film trailer was not promising, the only music on it being ambient doodling. And though I did hear a couple of pieces by Muhly I liked on YouTube, his electric violin concerto live seemed devoid of content to me. But as a young friend of mine who's going to the opening tonight says, we must keep an open mind.

You'll not regret dipping in to the lucid prose of Hallelujah Junction.