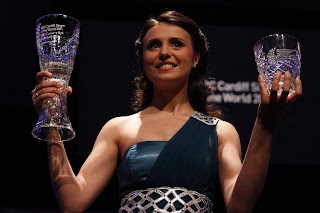 ...in the final of the BBC Cardiff Singer of the World Competition. Well, let's say four out of five: there was one who had me leaving the room. And perhaps I don't even have the right to judge, because apart from a stunning clip of Russian mezzo Olesya Petrova posted on Jessica Duchen's blog, I hadn't seen any of the competitors until tonight, when it was a definite telly fixture. My fellow blogger Jon Dryden Taylor has kept us all entertained reporting with his usual eloquence 'as live'.

Credit where it's due first: Moldovan soprano Valentina Naforniţă's win was as much of a surprise to me as it was to those loveable diva commentators Joyce DiDonato, who'd been knocked out at an early stage the year of an unworthy winner, and Nicole Cabell, 2005 'Singer of the World' and a much classier soprano than detractors seem to think. But who could begrudge Naforniţă the two trophies, from audience and judges respectively, as depicted in Bryan Tarr's photo for the BBC above?* After all, this is as much about promise as it is about realisation, and though she ended up trying Lucia, Rusalka and Gounod's Juliette for size in turn, and seemed to improve as she progressed, the main thing is that the only-just-24-year-old, to use that inevitable cliche, lives the music.

As, in a slightly stagier way, did Birmingham-based Meeta Raval, who travelled in the opposite direction from a stunningly artistic and well-phrased Trovatore Leonora to a not-quite-desperate Manon Lescaut and a Strauss "Beim schlafengehen" which was more impressive for breath control than tone quality. And, boy, is tone quality the optimum with Petrova. Hers is no doubt the most beautiful instrument, and as Borodina wanes a little, Petrova's is the right voice to step into her silver shoes, if she can sort out the top. Still prefer the clip from Vienna which Jessica posted, so here it is again.

As for baritone Andrei Bondarenko, he was the hot favourite with everyone I'd spoken to, and I guess I was just a tad disappointed that the legato doesn't quite enjoy the cello-like timbre of the great Hvorostovsky; the pronounced vibrato gets a bit too much in the way. But he's utterly believable, comfortable in his own skin, and changes character with a minimum of fuss. His choices in the earlier round were probably better, and he did say that he felt tonight he was only at 70 per cent, so here's that strand.

Korngold was in Naforniţă's previous performance, too, and though the voice isn't settled, you watch her with delight.

As with Shcherbachenko two years ago, cheekbones and glowing musicality have it, though she's not as rounded a singer yet (no wonder; she's a good deal younger). And what a top-quality competition this is in every way: distinguished judges, nice Welsh people making humble and sincere speeches, fluent and non-irritant presentation (the only thing I wonder is whether Petroc should have spoken of Bondarenko singing 'in his native Russian' when he's Ukrainian, but we all know what he means). The best thing of all is that there is, or should be, no rancour at who wins, since we're not talking about teenage girls choosing a pretty, bland crooner over an obvious star, Adam Lambert in American Idol. But that never harmed his career, and all of these finalists will be getting good work, so does it matter?

On which note, I feel I have to sound the trumpet again for the two superlative singers I heard in Christ Church Spitalfields last night - mezzo Stephanie Marshall in a new van der Aa piece, and - a total revelation to me - young South African born Sarah-Jane Brandon, winner of the 2009 Kathleen Ferrier Awards, as the voice of childlike heaven in Mahler's Fourth, albeit the exquisite chamber version arranged by Erwin Stein. 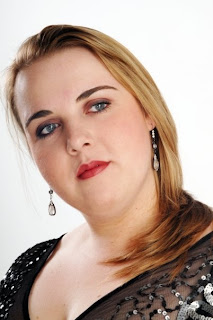 I meant it when I said I've never heard it sung better in concert, and that's saying something.

And finally, since there were no can-belto gentlemen in tonight's finale, let's celebrate a yes-he-can egging on of a closet singer with star potential in what's undoubtedly been the most fun experience of the week. I went expecting to grimace through the musicalisation of Lend Me a Tenor at the Gielgud Theatre; yet though the musical itself isn't quite top notch, the way it's done is irreproachably brilliant and zesty. More raving on the Arts Desk. Here, in a production photo by Roy Tan, is Damian Humbley's shy Max Garber learning to unlock his inner Caruso with a little help from Michael Matus's equally charming Tito Merelli. 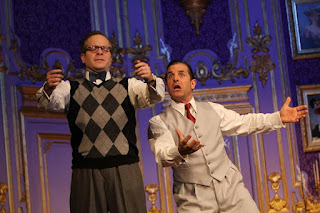 *and why the suspicion, which I've since seen voiced, about winning over judges and audience with revealed emotion? It's different from emoting, which the operagoing public at least senses and doesn't like, and it has to be the most important factor. You can have huge personality and not the world's greatest voice, and you'll do deservedly well - viz Danielle de Niese - but if your sound is the greatest and you don't communicate, forget it. I should add, by the way, that Petrova's lovely soul shone through, too.
Posted by David at 21:33

Thanks for the plug! I shall be avoiding 'Lend Me A Tenor' because I can't quite believe it's been turned into a musical. Just about the happiest experience of my professional life was playing Tito in Pitlochry in 2004, despite nightly terror at the thought of singing 'Dio, che nell'alma infondere'.

A closed mind in spite of all I have to say on the subject? Go and see it while you can. Tho' I'm curious as to where the Don Carlo duet comes in - when he trains the baby tenor? It isn't in the musical, which may be one reason for your not investigating...

What makes the play stand out is that it has a USP- it's a classic farce but people sing opera in it (Max sings 'Celeste Aida' at the beginning of the show; Tito and Max sing the Don Carlo at the moment you guessed, Max sings the end of the Otello duet at the end). Make it a musical and that point of difference instantly disappears. And they've messed around with the plot, too, which they shouldn't because it's PERFECT. (I can be quite stubborn...)

Yes, I noticed, but thanks for clarification, wish I'd seen it. If you read the review you'll see that part of the reason it gets my vote is the skilful way the opening Otello chorus is woven into the opening number, 'Where the hell is Merelli?' And the death scene opens Act 2 with neat symmetry (there's a good gag about the dead Desdemona revealing her good side to the audience).

I'd go, though, if nothing else, for the brilliant tour de force of operatic heroines carried off without a trace of archness by Sophie-Louise Dann in Act 2. Which is better, anyway.

Doh, I hadn't clocked the link to the review. 0/10 for attention, Taylor.

1 - Jondrytay, I can't remember why I missed 'Lend Me a Tenor' at Pitlochry, but I'm cross I did.
2 - David, I'm interested in your comment about not so great voices getting the message across. It's very true. In Opera de Lyons' production of MAZEPPA at Edinburgh Festival a few years ago, even if Anatoli Kotscherga's top notesweren't perfect, he was being tortured to death, godammit!

Ah yes, the great Kotscherga - what a singer-actor. His Boris for Abbado is quite rough, but the tsar was supposed to be a tatar and son of a hangman. I always play my students his clock scene after Chaliapin's to show what dramatic truth can achieve - to contemporary tastes, at least, AK is more 'real'. Wolfit v Jacobi, I guess.