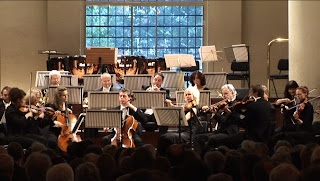 Three stills from a publicity film by Alexandru Gherman - reproduced with thanks - were all I could muster to accompany a little paean for the Chamber Orchestra of Europe’s vivacious birthday concert at St John’s Smith Square the other Monday (bit of a hobby-horse of mine, about musical organisations not engaging photographers for special events: can you believe there were no shots for the Bell-Frank-Zimmermann-Denk-Isserlis team at the Wigmore’s 110th birthday bash on Wednesday?) 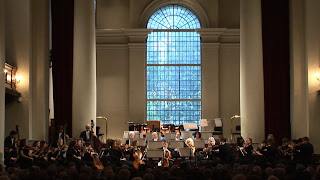 Anyway, a joyous event the COE concert turned out to be, and though my speculation that Abbado was going to be the mystery guest conductor proved wildly out, it was fascinating to see how far these crack players could go without a stick-waver at all. Mozart’s 29th and Figaro Overture I could understand – even there, a maestro might have been helpful for the occasional upbeat – but surely they weren’t going to attempt Prokofiev’s Classical Symphony by themselves? But wait – there was Vladimir Jurowski sitting down in the stalls. In fact he was drafted in for the encore, a lovely touch: 30 years ago at the inaugural concert James Judd pulled mover and shaker Abbado out of the audience to conduct Rossini’s overture to La Cenerentola, and here it was again, blissfully crescendoed and nuanced beyond belief in those perky little bittersweet woodwind solos I love so much.

But the Classical was rather magical, too – bright and clearly articulated, like the rest of the programme. How could one not be reminded of the conductorless orchestra who played it when Prokofiev made his first visit to the new Soviet Union in 1927, Persimfans (= Perviy Symphonicheskiy Ansambl' bez Dirizhora= first symphonic ensemble without a conductor). It did well, but hardly lasted long. They even played the Scythian Suite. Co-founder Arnold Tsukker wrote a book about the first five years which I'd like to get hold of - but not at the online asking-price. 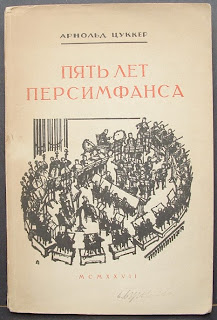 Anyway, on Monday there was – to my ears, at any rate – a radical rethink about the Bach Double Concerto; you could forget that famous slow-movement image of two planes in a clear blue sky. But the partnership of founder-leader Marieke Blankestijn and Lorenza Borrani, who wasn’t even born when the orchestra kicked off, with their fellow strings couldn’t have been more exhilarating. 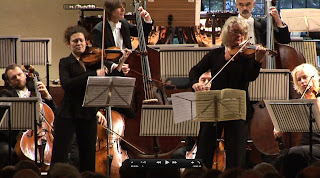 Good, too, to see some familiar faces including cellist Willie Conway, whom I knew vaguely from Edinburgh days, horn-player Nicholas Thompson, double-bassist Enno Senft and, in the audience, that fabulous oboist (and not at all bad conductor) Douglas Boyd. Now all we need is to see more of them here - which, at last, we can do when Haitink conducts two all-Brahms Proms with Ax as soloist in the piano concertos.

Finally, happy 30th birthday to me and the bigger stars of the Bedlam/Edinburgh University Theatre Company production of Cabaret, the rehearsal period for which I recall as the happiest time of my youth (not of my life, of course). I wrote all about it quite prematurely at the beginning of the year, and used up most of the production photos then - the one of Andy Beale as Hitler youth I really can't justify, for fear it might end his distinguished medical career - so how about a truly embarrassing reminiscence for Sally Bowles and Fraulein Kost (real names withheld, but I love them both dearly)? Cramond beach party during Cabaret fortnight, May or June 1981, fashions - Simon Bell's jacket and the trainers dishonourably excepted - courtesy of the second-hand clothes shops in Stockbridge. 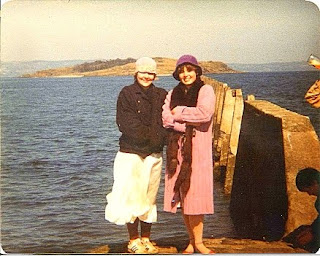 There is something wrong, architecturally, with St John's Smith Square. For many years I thought it was because it was built as a protestant church, protestant other than the Church of England, that is. But in that assumption I was of course wrong. So why does it have - in the interior - that feeling of boring formalism? I suppose the obvious answer is that the interior is the result of the restoration from a ruin after the war, when uses other than worship were in the minds of the various parties involved.

Is that underwear on my head, or a dainty tea cozy? Embarrassing. Thanks for ok-ing this with me first though, David........:)

I was young once, too, dear Maria, my pride and joy being a pair of blackcurrant-coloured cords akin to the raspberry ones so relentlessly disdained by A McCall Smith. And the grandad shirts...