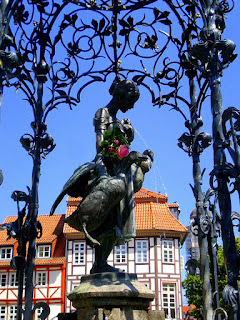 The one above celebrated her 110th birthday yesterday. So it's not quite an age-old, but still a charming, tradition that students of Göttingen's Georg August University, Cambridge to Heidelberg's Oxford (or perhaps vice versa), go to the town's main square on receiving their doctorate, kiss the rather beautiful Art Nouveau Gänseliesel or Goosegirl's cheek and leave her flowers and a candle in thanksgiving. I was lucky enough to see the ritual in action, walking through town to catch the 7.55am train to Frankfurt after a happy day and a half at the Göttingen Handel Festival. 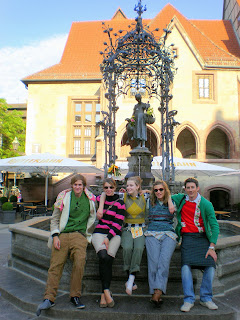 These two jolly medics, flanking three girl friends, had just gone through the motions ever so poetically (by the way, I was reminded that a first or second degree doesn't qualify you to kiss the maiden; only a doctorate will do). They hailed me, rather curious to know what anyone else was doing walking the sunny streets of Göttingen so early on a Sunday morning, we chatted and I took their photo (it felt too corny to ask them for historical re-enactment, though you can see the boys were kitted out for it). I don't even know their names, but what an echt farewell it was.

It might seem a bit forced to fanfare the other idol of the town under the 'sweetheart' label, but no doubt about it: the townsfolk love Nicholas McGegan more than ever as he comes to the end of his 20-year tenure powering the Handel Festival. 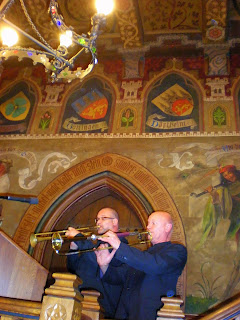 I'd come chiefly to hear him conduct Teseo in the town's ideally-sized small theatre, and indeed the orchestra was really the thing, though there were two very classy performances from Amy Freston and the flawless Robin Blaze. I also heard two fabulous events in two of the churches.

But more of that in the Arts Desk piece on Sunday. Let's just catch my not-as-good-as-the-professionals glimpse of 'Nic', as they call him, sporting his newly-pinnedVerdienstkreuz am Bande, the Cross of the Lower Saxony Order of Merit. 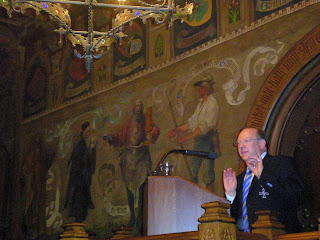 He's standing on the staircase of the Old Town Hall, and appropriately the furthest of the three figures on the wall to the left has 'ars longa, vita brevis' inscribed above. Although the Town Hall was built on the site of an even older one in 1270, it's gone through various modifications which do nothing more than show its consistent vitality and usefulness, including the plastering of the Great Hall in 1883, and a very fine job the artist has done, I think. The coats of arms above the main friezes are those of the Hanseatic league, to which Göttingen belonged from 1351 to 1572. Lübeck and Braunschweig have the central position, though of course the heraldry stretches further to Riga and my beloved Visby (to which it looks as if we're not destined to return after all this June). 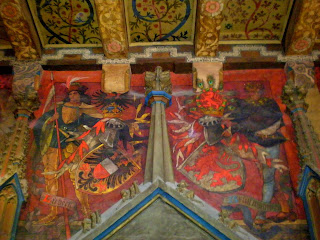 The figures have links to the rooms around which they're positioned. I love the Meistersingerish significance of this craftsman, who could well be goldsmith Veit Pogner. 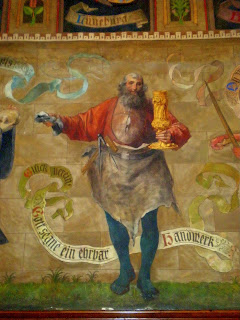 A minstrel prances down the staircase 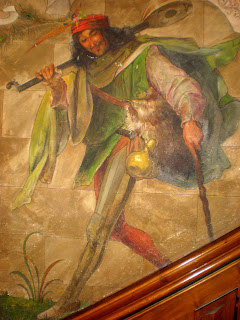 and the young newlyweds outside the former registry office might be Eva and Walter. 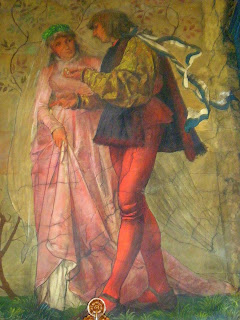 Not without significance to Wagner's opera, perhaps, since the people's will has usually been paramount here. The citizens rebelled against the councilmen's favourite fountain design at the end of the 19th century and got their way with the Gänselieselbrunnen. By the way, Gottingen was one of the few German towns to be spared flattening in World War Two - so was Heidelberg, leading many to speculate that the Germans left off Oxford and Cambridge in some kind of sick deal - so there's plenty to see. I'll return to churches and housefronts anon. 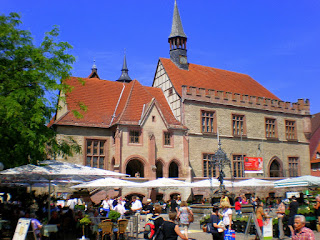 But I'm still in a Handel mood: it might have been that, or sheer overtiredness, that made me enjoy the Philharmonia concert on Sunday night less than I might have done. The pre-performance talk with Vasily Petrenko went fine, though the fun was a bit more at my expense than I'd anticipated, with VP playing to his Liverpudlian fans who'd come down specially to see him. But I do reckon Simon Trpceski - a pianist I usually love for his brio and communication - whizzed far too much through Tchaikovsky's Second Piano Concerto. And it was unforgiveable of him to insist on the Ziloti two-thirds-cut slow movement, especially as the Philharmonia leader Maya Iwabuchi and her cellist counterpart Karen Stephenson did so gloriously well in what little they had to play.

This morning I listened to 'special guests' Kennedy and Isserlis with Donohoe for Barshai (EMI), which only underlined more than ever what a bad mistake it had been to cut it: the solo strings lead the bullish virtuoso into a whole new world, and he/she needs that time to stay there. Wrong to wrench it out of context, perhaps, but in case anyone's reading who was also there and didn't think it was a great piece, here's a crackly old Melodiya recording of the first violin/cello duet before the piano enters (which is where Sunday night's performance essentially started; and we didn't get the central angst on display here, or the later string cadenzas, either, which you can hear in Part Two).