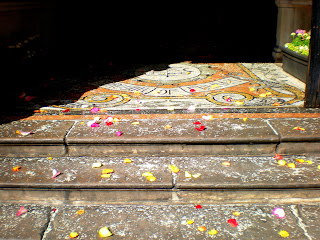 More nuptials, this time taking us from the westernmost shores of Connemara to the steps of Fulham Town Hall, strewn here post-ceremony with rice and rosepetals (incidentally Henry James called our neck of the woods 'the western wastes', and although cachet was implied when the Victorian developers renamed it 'West Kensington', it's really North Fulham). Hélène and Olivier were married in the rather splendid council chamber, the mostly French guests amusingly looked down upon by portraits of local worthies and George V as well as a well-executed set of Anglo-historical stained glass windows ranging from Alfred the Great to the Fulham potteries (est. 1672). The groom's brother, a harpist with the French National Radio Orchestra, spun silk around the waiting group. This is where the banns for our own civil partnership were posted, but since we wanted to be among the first to be legal in the UK, we actually signed up in Camden. There were at least as many gay guests as straight at this one.

The promenade made us see the route in a new light. 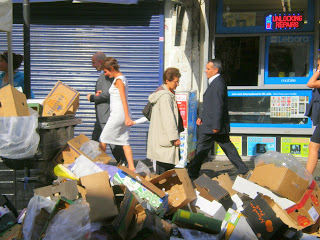 I've never been that fond of the North End Road market, where you can't pick your own fruit, or couldn't the last time I tried, but it's improving, with a good falafel stand and an excellent French deli van on Fridays and Saturdays for the (us) BoBos*. The Iranian/Iraqi shops are good for supplying my handful of signature dishes. 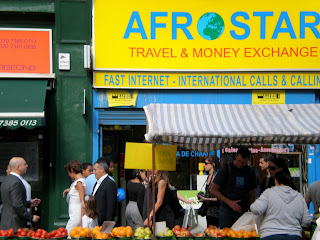 Crossing between the bed and pawn shops, the nuptial cortege entered our enclave with its cruelly pollarded London planes and central gardens unvisited by non-residents, thanks to factional self-interests, during London Squares Open-Day Weekend 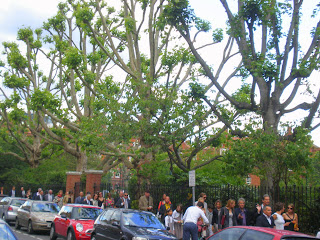 and wound up at the Pear Tree Pub just by Charing Cross Hospital. 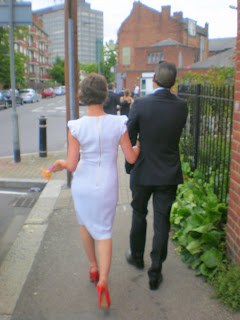 The larger institution is all too well known to us, but the pub was not; I'll certainly breakfast and lunch there now.

*bohemian bourgeoisie
Posted by David at 15:57

What fun - it's a bit like a scene from Notting Hill. All you need is the seasons to change as the procession progresses.