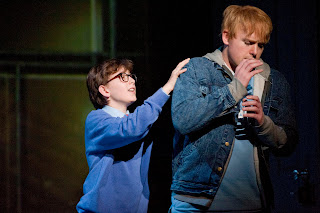 I'm certainly not referring to their creators pictured above in the first of Richard Hubert Smith's ENO production shots: knowing treble Joseph Beesley and more-than-promising tenor Nicky Spence, unrecognisable in the transition from feckless twentysomething Baron Lummer in the Scottish Opera Intermezzo to tortured teenager. Both were part of an excellent team at ENO, all of whom handled their not ungrateful vocal lines - that's something, for a start - with aplomb. And I hate to pour cold water over the bubbling score of the orchestrally adept Nico Muhly, who knows how to orchestrate and provides more shifts in instrumental colour and texture as well as harmony than I was expecting from Glassian premises.

Yet the whole thing is so turgid and lumpy as music-drama that half way through the first act I wanted to run screaming from the theatre. That's a response, I guess, though it's not even the purer loathing I had for Glass's Satyagraha. At least Glass had the courage of his back-to-basics convictions - an anti-theatrical four chords in forty-five minutes which serve as something of a trademark (that he simply hasn't evolved like Adams or Reich is another matter). Muhly, though, always sounds like someone else - mostly Adams in early, Nixon in China mode, without that score's flying dynamism. 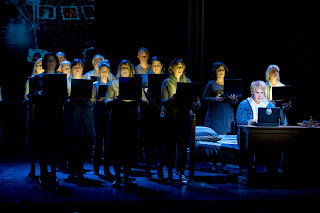 And how did Muhly botch that most operatic of opportunities - the chance to haunt us all with a choral, overlapping representation of the internet's humming 'netherworld of cheerless cheer'? When so-so librettist Craig Lucas says that 'opera isn't about beautiful music, it's about dramatic tension', he sounds Two Boys' knell - though he seems to believe that his composer can do the nodal-point stuff. Really? Only consider the stabbing and its aftermath, which despite being set up by some fine growly tuba-and-basses writing go for nothing (is that the point?) The overall result is portentous, very far from the humanity Lucas half-etches and as moralistic as the Royal Opera's Anna Nicole without the fun, the musical invention or the staging of genius.

I liked two things in the score: the shifting support for the first solo of Sue Bickley's Detective Inspector Anne Strawson on curtain-rise, and the way her vocal line takes up the orchestral line at the start of the second. Yet ultimately even Bickley doesn't have a chance to engage as she should. 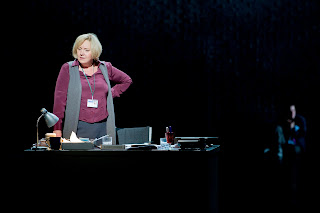 There's still a chance that the real Nico Muhly will stand up, but I have a feeling he may carry on being the Korngold to John Adams's Richard Strauss (which is hardly a huge insult if you revere Erich Wolfgang more than I do, and besides, Korngold even at his most precocious had a better sense of where to press the dramatic buttons than Muhly does). Let's also remember that by the age of 30 Shostakovich had written both The Nose and Lady Macbeth of Mtsensk, Prokofiev The Gambler and The Love for Three Oranges. All I can see at the moment, though, is that in terms of sharpness, subcutaneous horror and sheer fecundity of ideas, ENO's latest show is left standing by its Midsummer Night's Dream - and that goes for Bartlett Sher's fidgety production, too, with its now-generic video projection.

Well, not everyone agrees: for an alternative view, see my colleague Igor's review on The Arts Desk. Do go and make up your own mind(s): just because a new work fizzles, that doesn't mean enterprising companies like ENO shouldn't keep on trying to find the operas of our time, the ones that really engage our hearts and minds.
Posted by David at 07:52

I didn’t really think there was any musical identity to it until quite near the end, when it finally shook off the early John Adams mashed with Koyaanisqatsi sound. It’s also amusing to read the comment about dramatic tension, because there really was zero tension. The singers all did very well, I thought, but in all it would have made a better 1 act opera, significantly tighter and with fewer diversions featuring Inspector Swanston’s mother. I just cannot agree with your colleague Igor's opinion that it was 'as gripping an operatic thriller as any ever penned.'

Re Igor - me neither: totally the opposite, in fact. And if it's any consolation I originally had 'Sue Bickley as Inspector Sue Bickley', which might be telling as I never really cared to take on this non-character's name...

It looks as if we saw it on the same night- although I liked it rather more than you did...

Ah, I wrote a comment, but it doesn't seem to have taken. Interesting what you write about Muhly's opera. I want to warm more to his music than I have so far, and I've been a bit skeptical about whether an opera might be for him, at this point, a bridge too far, though he does seem to have a lovely feel for the voice. Worth paying attention to him, though, as he continues on, don't you think?

Sorry, no sign earlier, Susan. Well, I wonder. Facility isn't the same as inspiration, and if I'd heard an idea in this and other pieces which made me think, even if only for a moment, aha - a voice, I'd agree. But I'm on the road to closing down. But it's worth absorbing the colours and textures.

Such a good point you make, that "facility isn't the same as inspiration." I'm very torn about Muhly, not the least because of a blog-fellow in California who writes thoughtfully about contemporary classical music and really loves Muhly. I suspect you're unlikely to agree at all with him, but if you're curious, here's a link: a fool in the forest

I've just read your blog about Nico Muhly's Two Boys, and I cheered. You are so right about it. I went on Friday, and walked out at the interval. I had great hopes for the opera, and wanted to like it, but it failed to press dramatic buttons in me. He doesn't yet know how to create a dramatic climax with harmony and orchestration, nor indeed how to write well for the voice (and that did surprise me given his life in Episcopalian church choirs in New England). He's a very fluent writer for orchestra, but his palette is narrow and almost monochrome. I hope he will revise it in the light of its exposure at ENO.
I was at an organ recital at Westminster Abbey a week last Sunday in which two of Nico's pieces for viola and organ were played. Interesting timbres, useful pauses to allow the reverberant acoustic to shine (is that possible? you know what I mean, though), little melodic cells that rotate with every repetition, but they did suggest that they were dashed off on the plane over from New York.