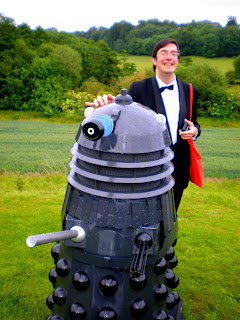 Kuda, kuda vy udalilis...Where, oh where, have you gone, golden days of my youth, when I used to cower behind the sofa at the sound of the BBC Radiophonic Workshop's Doctor Who theme and still more at daleks and cybermen (Jon Pertwee era, if you must know)? And here I am, ahem, several decades on, celebrating my birthday at Grange Park, where in among the watery fantasy of Dvorak's Rusalka were to be found reminders of that timeless and long-running telly masterpiece. 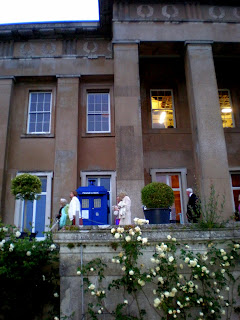 I know they incorporated the above tardis in last year's suitably wacky production of Prokofiev's Love for Three Oranges, but did the Doctor Who team film here? The elusive Wasfi Kani was not to be tracked down to ask, but I'm thinking it would be a creepy location for one of the weirder journeys into the past. William Wilkins completed the job in 1809 for the then Lord Ashburton, whose descendent still strolls on in front of the prosecenium arch and tells jokes with huge charm (some compensation this year for the absent black labrador Ellie, whose retirement from the stage was marked with a real shaggy-dog story).

As Pevsner/Lloyd puts it, 'Wilkins added to his encased [17th century] house a Parthenon portico of tremendous pathos: six Greek Doric columns wide and two deep, facing E and overlooking the lake. This was one of the first determined credos in the coming Grecian mode, highly exacting and far from domestic'. 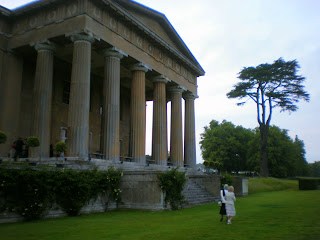 Much as I find Grange Park the most otherworldly of the summer opera locations, - yes, the braying is always a minus at all of them - and second in quality only to Glyndebourne, it's still frustrating to be so contained within the limited grounds of this semi-ruin, and not able to walk down to the lake 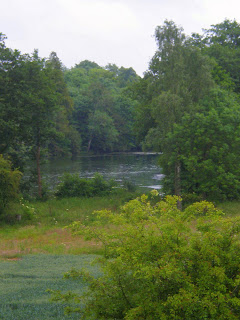 since Rusalka's watery realm seemed to demand it. Actually this wasn't the most magical of stagings, much as I love Anthony McDonald as a designer. Read why not on The Arts Desk. I think, too, I must have got the more world-class of Tristans running this month, though all credit to Grange Park for attempting it. But after so long, you have to ask yourself the question - do you really want to see the operatic masterpieces done with a perfectly good second-cast team?

Anyway, below is Alastair Muir's Rusalka photo of Clive Bayley, in good voice as the Merman (cf Vodnik) with the three tree nymphs augmented intelligently by three dancers - though I missed the breast-waggling wildness of Melly Still's feral creatures at Glyndebourne, and in fact can't wait to see that show again when I go to give a second pre-performance talk on 14 August. 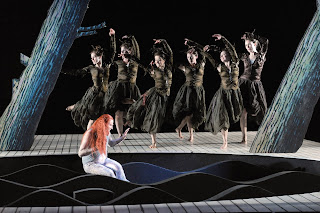 As for 'how old D Nice?', same reply as for the famous Cary Grant telegram: 'old D Nice fine: how you?'. Let's just say I am not of quite as venerable an age as the two Americans I most admire, with birthdays either side of mine - Aaron Sorkin, whose West Wing continues to astound us every time we have an evening in, and (only a few days older than the diplo-mate) Barack Obama. It is, of course the big 5-0 for all three this year. And we had a lovely day, thank you, poking around Winchester in the afternoon mizzle - more anon - and dining on the Grange's as usual excellent fare in crumbling splendour (lobster and prawns for me, a la Rusalka), served by an especially attentive waiter ('I'm Rory, and if there's anything you need, just let me know').
Posted by David at 11:45

Not to pick nits overly, but I think you meant the "Jon Pertwee" era, yes? That aside, not sure if I'll ever live long enough to check out Grange Park Opera, if life ever brings me back to your side the pond.

Goodness, yes: I think Bill Pertwee was the sarky warden in Dad's Army (though I may be wrong on that). Doctor Who fans will never forgive me. So I'll now amend it.

There you are! Happy, happy birthday x

And bravo you for all your Cardiff coverage - wish I'd seen more. My money, as you know, was on Bondarenko for the full package and the Novaya Borodina for the voice. But oddly I wasn't sad that the Moldovan won, though I wouldn't have guessed it - she had charm.

A birthday surely not? You had one of those last year why on earth would you want another one this year? Happiest of days dear friend even if it is a bit belated. Rusalka at Grange Park is not a bad way to celebrate reaching your majority.

Thanks, Will, but majority? Oh no, you misinterpret. I'm 23.