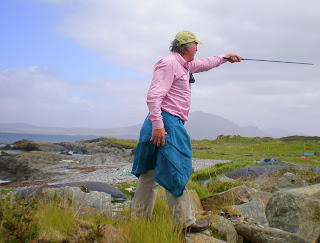 Not quite Connemarans all, the entertainers at David and Gwendolen's wedding - and certainly not the madrigalians, instrumentalists and Tom Mooreists during the service, self included - but carpenter, fisherman and anecdotalist Jackie Coyne, pictured above leading us on a Sunday afternoon walk around the Renvyle peninsula, certainly is. The two big family names hereabouts are Coyne, as in the name above the splendid pub in Tully Cross 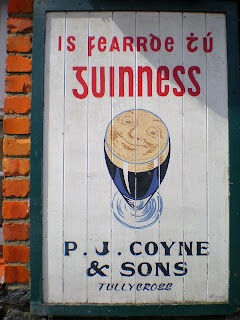 and Joyce, though 'Joyce Country' proper is some way to the east. 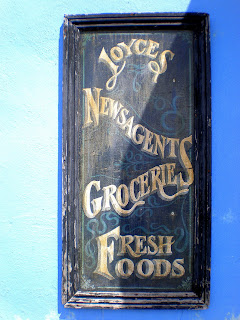 Jackie's tour turned out to be not so much an exposition of local geology and history as of family chronicles, but so entertaining were they all that nobody minded in the least. And he quickly gauged from the stragglers that a spurt up the hill wouldn't do, so we stuck to the white sand beaches, which since I'd struck off in the opposite direction that morning was fine by me. 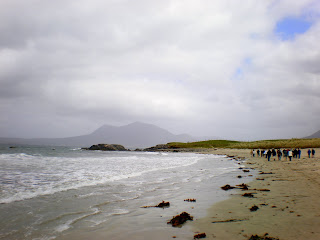 Great gobbets of seaweed washed up on the beach reminded me that one of the few occupations by which the Connemarans used to live was kelp-gathering - especially, as Tim Robinson's helpful if slightly oversold* Connemara: The Last Pool of Darkness tells me, 'when continental sources of alkali for glass-making and linen-processing were cut off during the Napoleonic Wars'. The trade declined thereafter when cheaper sources were found 'in the saltwort marshes of Spain'. 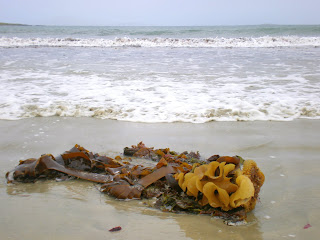 Potatoes grew in seaweed-rich soil; but then the famines struck. Herring, mackerel and salmon fishing came and went. In the early 19th century, too, writes Robinson, 'the farmers of Meath needed all the calves Connemara's thin pasture could breed, to fatten on their richer grasslands'. Some cattle remain. I didn't see this one - the warning was on the gate in the opposite direction from which I'd come (presuming that farm tracks with no 'keep out' signs on them were fair walking territory once the road left the coast), with no matching admonishment on the other side - 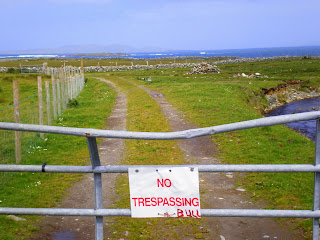 but there were several grazing contentedly on the uplands. 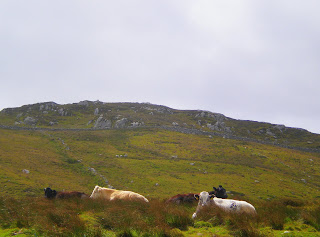 But of course it's the sheep and their lambs that keep the farms going. 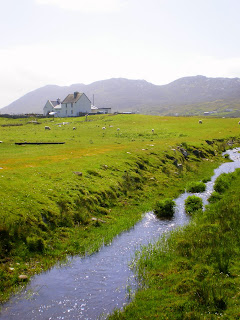 The once natural co-existence between land and livestock is being carefully reasserted but - adds Robinson, a touch piously - 'there is one monstrous contradiction at the heart of this caring programme and that is the slaughter of the innocents, exemplified by those 500 Cleggan lambs torn from their mothers, packed into lorries and taken off to an abattoir every spring'. Delicious, Connemara lamb on a plate, I blush to add. And we all love to see them gambolling in the fields by the sea, as I did on a morning walk around the head of the peninsula. 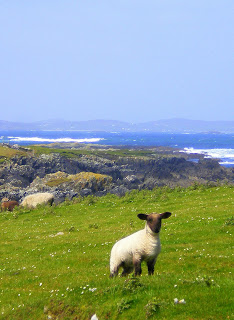 Cushier comforts were to be had, at least from 1917, in the old house at Renvyle. In that year it was bought by Oliver St John Gogarty, surgeon by profession but jack of many other trades including verse, and the very same 'stately, plump Buck Mulligan' who launches Ulysses as a not entirely worthy companion for Stephen Dedalus (Gogarty did indeed share a Martello Tower outside Dublin with fellow Trinity College student James Joyce). The original house was burnt down in the troubles of 1923 - Gogarty was a Sinn Feiner but despised de Valera - and rebuilt by 1930, though ghosts continued to visit, or so W B Yeats's spiritualist wife George asserted. There is still a haunted room - number available on application - but it seems a rather robust and common-sensical place to me. And clearly by the time this bust was made, Gogarty, who died in New York in 1953, was plump no more. 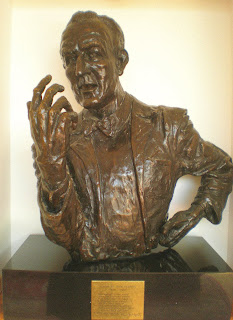 Within his walls resounded quite a wedding party, spread over two nights, with dancing to The Controversial Allstars. On the first we loved watching talented young Emma O'Sullivan, daughter of the hotel's superb head chef, repeating the kind of performance which got her to the final of Ireland's Got Talent. This is the real Sean Nos, Irish traditional dancing, without the influx of the stiff arms-by-sides mongrel. First and last of the films are a bit dark, forgive, but you get the lively gist.

Nicer, of course, to see the arms free, but Michael Flatley did a grand job bringing back his own form of Irish dancing and how it now flourishes among the kids. Here are some of the older members of Cosa Beoga ('Little Feet' in Gaelic) from Abbeyknockmoy, who came along the following night. Haven't got the boys doing fabulous things with brooms, and the feet are rarely visible from my open-window coign of vantage, but you see how good they are.

Last, but by no means least, David had managed to lure veteran fiddler and traditional singer Dessie O'Halloran over from his native isle of Inishbofin to sing a few numbers. J was especially delighted by an old favourite, 'Come down from the mountain, Katie Daly'. Here's verse 10 or so.

This man is a national treasure. I had a chat with him over breakfast and learnt that he'd lived for many years in my native neck of the woods, Surrey, patio of England, in Chessington, no less. I love the way these guys - Jackie, too - get a hold of your Christian name and then proceed to address you confidentially by it as if they've known you all their lives.

We did our own dancing, too, with Jackie calling, and I worked up an alarming sweat (though as always felt better for it the next day). Later the bride and groom were chaired while a rabbi friend sang, and his wife played the violin. 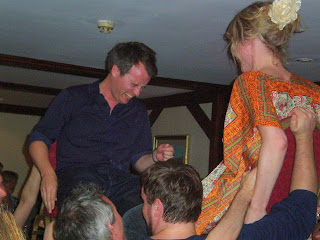 Much to celebrate, then. But how sad to learn that on the very same day as we were having such fun at an all-inclusive traditional wedding, Russian gays and lesbians were banned from marching to celebrate their love. The Mayor of Moscow wouldn't give them the same licence he granted to Neo-Nazis, can you believe, who duly weighed in with the violence when they went ahead anyway. I'm not surprised, but shame on you, mother Russia. And three cheers for the prevailing good in long-hidebound Ireland.

*hardly his fault if the (mostly Irish) reviews quoted on the back cover lead one to expect a masterpiece - 'one of the best non-fiction prose writers currently at work', 'an imperishable monument', 'one of the great polymaths of our time', 'one of the finest of contemporary prose stylists', 'Robinson writes...with extraordinary beauty' - when surely it's just rather good, one of many such travel books? But book reviews are ever thus, and you usually only have to trace the connections to find a friend. Is this more rife in that world than in any of the other arts-reviewed groups?
Posted by David at 09:17

Hope I find you well.

It would be fantastic if I could use one of the images you've published here to accompany some copy for the research and development material I am producing for a theatre piece called On the run. We're completely not for profit at the moment!

Do let me know whether that would be ok.

Of course, Mark, with a credit if possible, please. I'd love to know which picture and what the context is.

It's for a theatre piece that I am currently developing. Part of the process is to do a work in progress showing, which needs an image to accompany some copy that I need to produce. I will do my best to make sure there is a credit.

Would you be able to send me a high res version of the picture? It's the one that is the gate with 'No trespassing BULL' written on it'.

My email address is mark.james.maughan@gmail.com