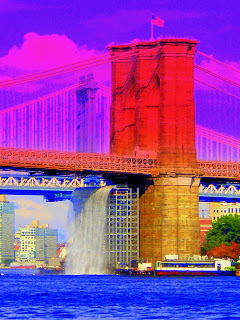 Hard to believe it happened here before it happened there, but same-sex marriage has finally been voted for in New York State by the senate in Albany: the stuck 31-31 turned to 33 for, 29 against, owing to two Republican 'defections of conscience'. Hence the tinted view of Brooklyn Bridge as I last saw it with one of Olafur Eliasson's waterfall constructions (not quite as pink as I'd like it, and a rainbow would have been even better, but you get the gist).

I'm still a little confused, or perhaps a little dense, about whether we should be putting 'marriage' in inverted commas. We still talk of civil partnerships here, and I'm happy to use that terminology - ie we have rights; that's good enough for me (it's also quite useful for telling strangers where you stand if they ask if you're married. 'No, I'm civilly partnered' is a quick answer which they can then follow up or not as they wish). 'Husband' (or 'wife' for that matter) and 'married' surely hark back to a more proprietorial idea of conjugal necessity, but I wouldn't deny folk the right to use such terms if it makes them feel more free and happy. Cheers! 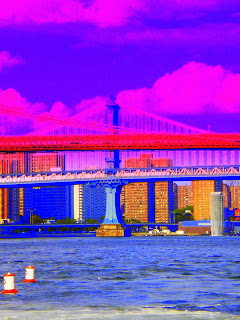 Meanwhile, the Anglican church hums and haws, making me wonder why anyone would wish to be yoked to it. So it's going to be OK for bishops to be openly gay, but they must be celibate. Even this, apparently, isn't enough for the evangelical wing. But in any case why deny people the only love they can say they will ever know for certain, and the right to express it fully? Craven-hearted indeed.

Unlike Rev. John Unni of St Cecilia's Boston, who got a standing ovation from his congregation for the speech/sermon in his 'All Are Welcome' service. He declared that parishioners 'are welcome here, gay or straight, rich or poor, young or old, black or white. Here, you all can say, "I can worship the God who made me as I am".' As I wrote to Will, who posted this on his Designer Blog, it only takes one good, charismatic man or woman to reverse a deal of harm.
Posted by David at 12:01

I thank who ever it is we should be thanking - strangely enough in this case politicians - that marriage equality has been around in Canada for some time now. And strangely it has done nothing to destroy the "sanctity" of holy matrimony that I am aware of. What term you now use is of course up to the individuals involved - we use "spouse" which I must admit has led to some confusion when ask who "she" is and I point to Laurent and say "him". And I find I am still gently correcting elderly aunts and uncles who refer to Laurent as my "friend" and explaining that yes on occasion we are friendly but that's only between matrimonial spats.


All that to say: Congratulations New York and welcome to the 21st Century.

One of those "defectors of conscience" was my state senator up here. I'd given up on him coming around and have some skepticism about what may have changed his mind, but I'm going to try to stifle that for now. So, very, very late in coming--one would think we'd have done better in New York. But at least now, it's happened!

(On perhaps a slightly related topic: So enjoyed your comment and such a nice welcome back for me! I only recently became aware of Britten's setting of Illuminations. The bit I've heard of the Bostridge CD sounds gorgeous, so yet another item on my "must order" list.)

Thanks for those observations, both, and hold your horses, Sue: not the Bostridge, if you please, unless you're one of his devoted fans. Either of the Pears-with-Britten, unless you're as allergic to him as I am to much of IB, or great late Bob Tear, or even Felicity Lott (it was originally written for a soprano)...

I have great difficulty on theological grounds with the argument that to be a gay Christian is fine so long as one is celibate. Christ said (Matthew 5 27-28) " You have heard that it was said ' Do not commit adultery'. But I say to you that whoever looks at a woman to desire her has already committed adultery with her in his heart" So one has not only to be celibate but to repress every instinct. I that what the Church of England requires?

A great deal of the distrust of sexual activity stems from St Paul, who held that the best thing would be for everyone to abstain completely ( he did allow marriage if one's lust was uncontrollable). So if his preference had been followed the human race would have died out. No doubt he expected the Second Coming to be imminent, but in the absence of which nothing Paul said on the subject of sex can be useful

One of the barriers to the formalisation of gay relationships is the resistance in many minds (in many parts of the USA) to using the word "marriage". I do not think that the gay cause is helped by insisting ( as some do) on using the word so traditionally used of heterosexual marriage, instead of "civil partnership" or some such term, which has the additional advantage David mentions

Agreed on both counts, Sir David - and especially welcome the Biblical refs of the first (St Paul - what a mess).

Thanks for the heads up. I haven't listened to Bostridge enough to contract an allergy, but I'm pleased indeed to have your recommendations!