Chelsea: eye of the storm 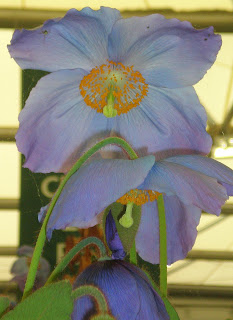 Never been to the Chelsea Flower Show before, never going again, but I would say that a glimpse of meconopsis baileyi, the Himalayan blue poppy we know so well from Dawyck in the Scottish Borders, as part of a truly well-thought-out display at the heart of it all made the crush worthwhile.

You have to negotiate the circles of hell first. The outer ones are the worst: garden furniture, statuary and rusty tortured metal of unsurpassable hideousness. 'Aspirational lifestyle rubbish' said J lugubriously, and it actually got worse once he'd made his exit and I tried to see what all the crowds were flocking to on the south side: the ludicrous plant lift 'modelled on Avatar', and what else I know not, because being caught in the thick of the jostling Middle English throng, I turned turtle and backed out. It was a little better in the grassy dell, where a brass band was playing an arrangement of the first, second and last movements from Mackerras's glorious Sullivan potpourri Pineapple Poll, but the refreshments on offer weren't much better than the garden ware.

The central marquee improves in terms of scent and display, though it doesn't do too much for species all jammed together. Thus hyacinths (in May?) 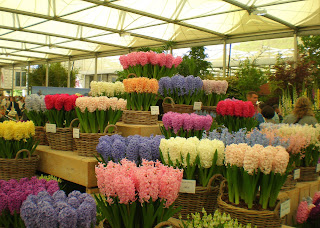 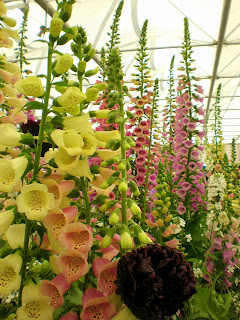 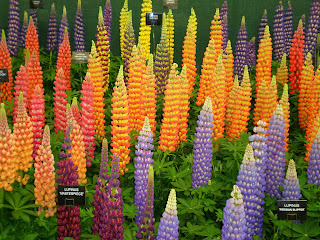 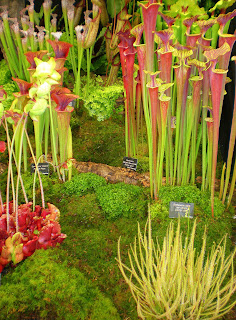 Then I found something I liked: the stand of Kevock Garden, 'alpine, bog and woodland specialists'. The Rankins who run it head off to the wild parts of the world to see what they're selling in situ . I even bought a catalogue. 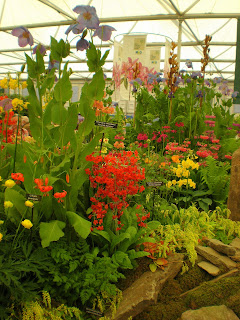 And here, at the quiet eye of the storm, was meconopsis, which I know my friend Kurt Ryz will be glad to see. Indeed, he probably has them thriving in his Finchley garden; I envy him his success, since the ones we transported from Chapelgill, Broughton, failed to thrive. 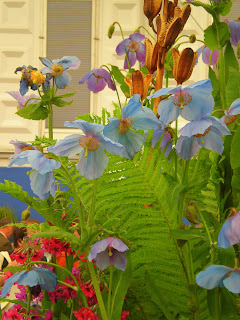 what a lovely poppy - I've never seen it before. As for the rest I'm reminded of the garden in the Great Garbo Camille - tulips, roses, daisies - every sort of plant blooming all at once in defiance of season. I thought it only happened at MGM.

That's it, Will, pure Hollywood - but with hordes of elbowing home counties tweedy bigbums.

Over many years, a discussion has taken place as to whether the Flower Show should move. Certainly there would then be more room to move about and see the exhibits. But the atmosphere might change and ( on the Parkinson's Law principle )the relaxation of the disciplines imposed by limited space might lead to a decline in overall quality.

From my perspective, it would be harder to decline further from the retail hell of the show's borderlands.

As an alternative, there's always Hampton Court, which was being merchandised mercilessly over the tannoy system when I was there.

Hampton Court sounds a rather good idea, in having an historic atmosphere in which to insert the show, though how much space there is there I do not know

I am not keen on the prizes awarded for the largest vegetables. The small ones taste much better. It was - I think - a 19th century Lord Lansdowne who wanted tiny vegetables ( cauliflowers the size of tea cups etc) but his gardeners always produced the largest for his Lordship, as seeming the best. Then he had an idea. He indicated that he was required to eat very young vegetables on doctor's orders - and that the gardeners understood

Then we're into the realms of genetic modification...no, bring on the big marrows and the small cucumbers (bit of a dirty word at the moment, I know). We were reminiscing about the local agricultural and horticultural shows we've been to like the one in King's Lynn every September, and marvelling at how much more fun they all are than this monstrous encumbrance.

David you have such turn of phrases, I laughed because I could picture exactly what you meant, ''aspirational lifestyle'' goes so well with the age of consumerism.

For that, Laurent - to be correct, the immortal 'aspirational lifestyle rubbish' - you must credit the diplo-mate, who would rather I put 'sardonically' than 'lugubriously' - the former no doubt more accurate, but of course I like the sound (and image) of the latter.