The good angels of Norwich 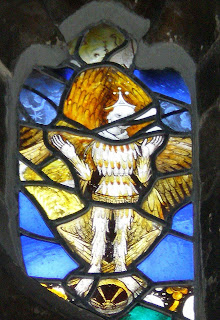 By which I mean not the legion which populates the rich medieval stained glass of this astonishingly church-rich city, but the citizens who do what they can to keep such gems as St Peter Hungate going. It lost its status as a home for valuable church furnishing in the late 1990s when Norwich's museum system went haywire. Now it's been reorganised by a group of local enthusiasts, chiefly as an interpretation centre for the story of stained glass. If I lived in Norwich, I'd join them as a volunteer, but in any case Hungate Medieval Art deserves our support.

This charmingly located church, surrounded by old cottages on Elm Hill, has its own treasures, chiefly a fine hammerbeam roof with angels and plenty of 15th and early 16th century glass in the east window featuring orders of angels and evangelists. Apparently the Laudians rebuilt the collapsed chancel in the early 17th century, but (laudably!) re-used the glass. That's St Mark in the second of the three pictures. 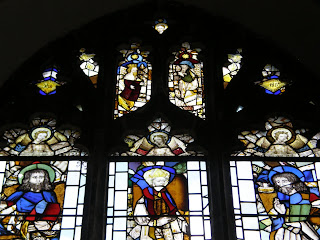 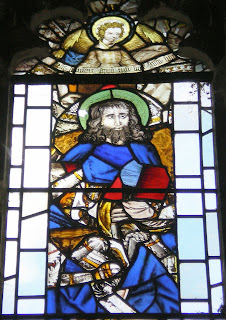 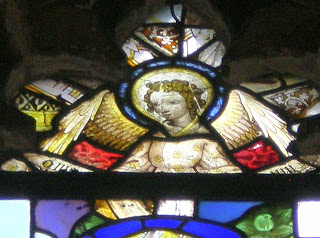 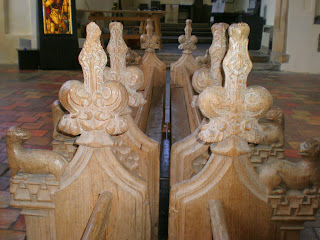 Needless to say, my completist hunger for church-trailing inclined me to overdo it, so we agreed we'd look at three churches only on our last afternoon in Norwich. Nearby we chanced upon St Michael-at-Plea, now a religious bookshop, but similarly situated with white wisteria in its churchyard 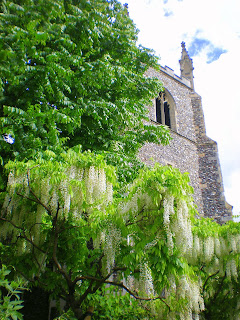 and a fine clock tower as well as a statue of its saint with the dragon above the porch which looks like a Victorian replica to me but is apparently part of the original perpendicular scheme. 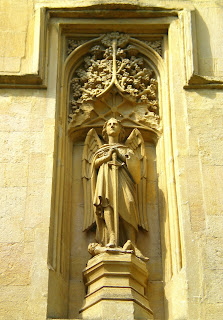 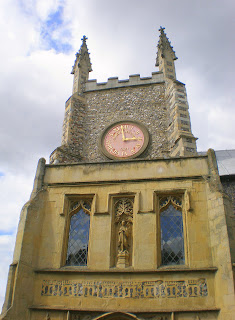 We had, of course, to invesigate the great Flemish-style market church of St Peter Mancroft, close to the City Hall, which in its way is another admirable symbol of civic pride, worth examining for its 1930s craftsmanship and, as Pevsner has it, 'the foremost English public building of between the wars'. Here's the church tower as viewed from one of Hardiman's bronze lions. 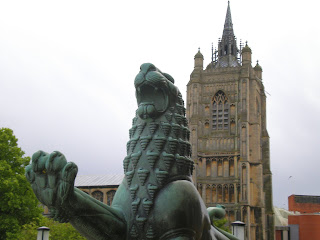 The interior is remarkable, however restored, as much for its supreme airy spaciousness 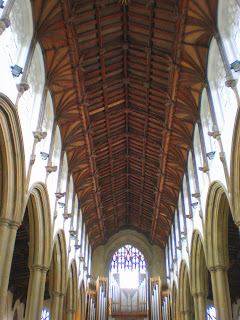 as for its east window - also much re-ordered from other windows, but the finest collection of biblical panels in Norfolk, possibly in the country. 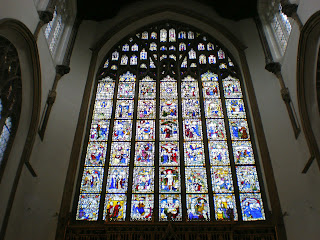 All images of the crucifixion seem to have been completely destroyed by Puritan zeal, and replaced, but the other strands are original medieval work. 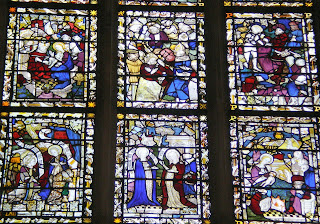 Inevitably overshadowed by its forbears is the east window of the south chapel, designed in 1921 by Herbert Hendrie in the style of Eric Gill. 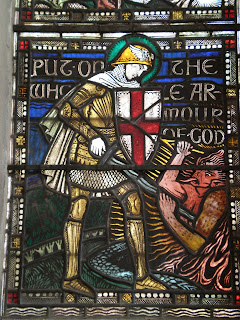 You can see far more, and much better, photos of the older glass both here and at St Peter Hungate on Simon Knott's wonderful Norfolk churches site. But there are other treasures too, lovingly tended by St Peter Mancroft's friendly wardens. I like the austere dignity of this 1592 monument to Francis Windham (Johnny Gielgud to the life) 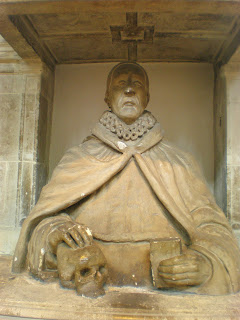 and there's a beautiful 1573 Flemish tapestry of the Resurrection 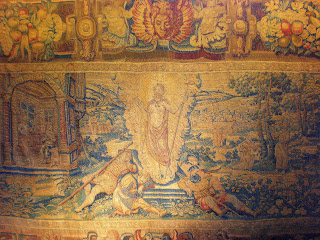 with an interesting detail of Christ appearing as gardener to Mary Magdalen. 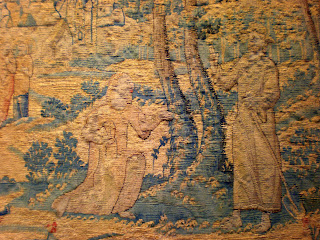 There's plenty of local TLC going on just outside the walls, too, but I see I've overrun on my time and space, so that will have to wait for another entry.
Posted by David at 09:47