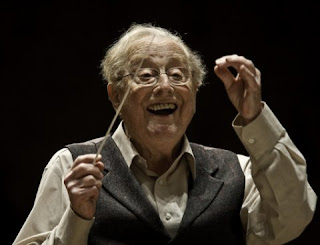 We can't stop talking about the great Mackerras and/or playing the encyclopedic music dear to him: after last year's blockbuster memorial concert, there's going to be an ENO operatic spectacular at the London Coliseum on 26 June, and next season the Orchestra of the Age of Enlightenment will be dedicating its 4 November performance of Beethoven's Missa Solemnis to his memory*. The above photo by the wonderful Clive Barda is just as so many remember the man in his last year - the radiant smiles came thick and fast for both the OAE and the Philharmonia.

I was so delighted to be asked to talk to three of the OAE's players about him before a concert he had been scheduled to conduct last Wednesday (shame on me; owing to Arts Desk duties I sloped over after the interview to the Festival Hall for Christine Brewer and Jurowski conducting the LPO; no way would I have deserted the other bunch if Mackerras had still been at the helm). Having already experienced this team's generosity of spirit when I had the daunting task of lecturing them on Tchaikovsky two seasons back, I was confident in advance that we'd engage and that they'd have plenty to say.

In the end it was the effervescent Chi-chi Nwanoku, most expressive of double-bass players and an experienced Radio 3 presenter, who said she was nervous just before we went on. Here's one of those wacky publicity shots the OAE releases from time to time. Sadly was too involved chatting to think of photographing the team, so she'll have to be the figurehead (and well chosen, by the way, as one of the 100 on the Independent's Happy list, a feelgood antidote to another paper's World's Richest. Other candidates include a retired sniffer dog, the cuckoo, Juliet Stevenson and Miriam Margolyes). 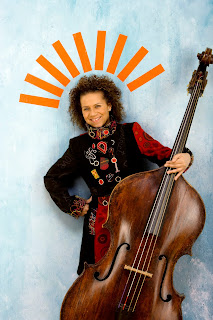 And we'd had such a lovely, slightly waspish four-way chat backstage, some of it not for the public platform (let's say it involved a certain tenor and a certain heavier-handed Mozartian conductor), that I did inwardly think we might lose the spontaneity in front of an audience.

But we didn't. The contrasting temperaments certainly helped: the other speakers were violinist Catherine Weiss, quietly sincere, more than able to hold her own, and that splendid anecdotalist (and a hero of mine as an oboist whose example I only wish I'd ever been able to emulate) Anthony Robson. I started out by focusing on each in turn: Catherine on the finale run of Cosis at Glyndebourne last summer, not long before Sir Charles's death; Anthony on first encountering him in the D'Oyly Carte Orchestra, tales of which, given my G&S mania, I could have happily have kept running for the rest of the half-hour; and Chi-chi on a performance which meant the most to her, an early (1989) Haydn Creation like no other, about which she talks so eloquently in the excellent little OAE book by Helen Wallace. 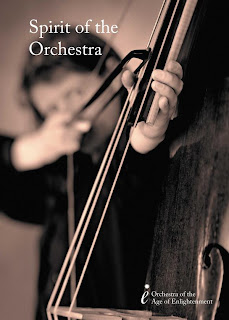 You'll eventually be able to hear the talk when the OAE puts up the recording on its website in the next couple of weeks. In the meantime, I have to say that the greatest delight came with the questions, when we were discussing the possible existence of rehearsal footage. And a lady in the audience said, 'I believe there's quite a bit from his work in Prague. I'm Catherine, Charles's daughter, by the way'. And there she was with Lady Judy, his wife, and, as it turned out a fair swathe of the Mackerras/Briger clan. I'd heard there was a possibility they might be coming, but didn't see any of them until that point. Cue a cheerful QEH foyer shot. 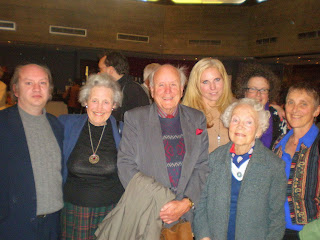 Pictured are Sir Charles's nephew Ambrose Hall, who'd come and spoken to me about Martinu after a BBCSO pre-performance talk, his mother Joan - can't you see the resemblance to brother Charles? - and husband Graham Hall, niece Christina de Briger, Frances Edwards (stepdaughter of a brother of Charles), Lady Judy Mackerras and daughter Catherine.

Have had an e-mail correspondence with the very friendly Christina, sister of conductor Alex Briger who did such a splendid job at the memorial concert and whom we hope will be able to conduct the complete Pineapple Poll at the Proms (I'm working on it). She's given me permission to reproduce some of her comments about beloved Uncle Charlie: 'still can't believe that he has gone - feel he's simply on tour somewhere and will be returning soon...he was SO present and giving to us all in the family, not just musically but through his love and care, always there in times of ups and downs.'

Catherine later added that he was still full of quotes and quips in the final weeks - on the ambulance to the hospital in Elba when he was taken ill again, she told him she wouldn't abandon him, and he mock-melodramatically declaimed 'Sola, perduta, abandonnata'. Apparently kept the other folk in the hospital amused with his operatic Italian. I miss him as well, though not in a painful way, and I wasn't even a member of the family. As I observed to Christina, there was always something of a longing for the father figure he became during our many 'tutorials' (a different subject each time: Beethoven's Leonore, Martinu's The Greek Passion, his work on Pineapple Poll, Mozart's operas etc) at Hamilton Terrace.

*The family also tells me that Alex's big project, the Australian World Orchestra, will dedicated its inaugural concert in Sydney on 26 August to his uncle's memory. Sir Charles was due out there to conduct the AWO's Beethoven Nine. It's still on the list, with a fine team of soloists.
Posted by David at 10:06

Thanks for this, David. Amazing how much he still seems to be with us.

You said it, Richard.