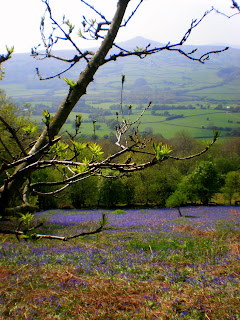 Believe if you like that it split asunder at the moment of Christ's crucifixion - I don't mind the extra layer of religious lore grafted on to folk tradition (and how horrified I was to learn that the Glastonbury thorn, with all its fluttering votive offerings, had been hacked down by vandals). Skirrid Fawr's odd landslip, which gives it such a distinctive outline from a distance as you come from Hereford or from Abergavenny, no doubt happened in the Ice Age. But it's not an especially grim or daunting place, at least on a windy but far from freezing icy last day of April, when we did the rounds with the Johnson-Joneses of Sutton St. Nicholas.

I hope anyone who makes the ascent doesn't just take the quickest route up the ridge and back down, for the walk along the western slope is perhaps the most beautiful part. Apparently this stretch of the Skirrid - 'Ysgyryd' is the Celtic word for 'that which has been shivered or scattered' - was plagued by conifer-felling until recently, but now it just seems like natural, age-old woodland, complete with fresh-sprouting ferns and even some late narcissi. 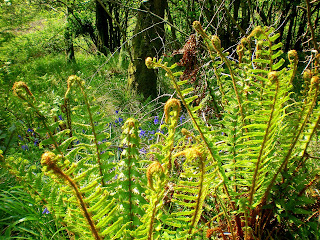 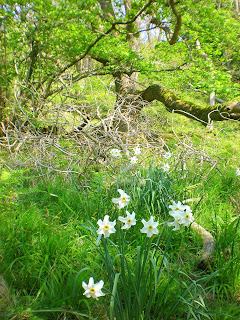 I thought the bluebell season had finished - it was over, certainly, in London - but not so further west. 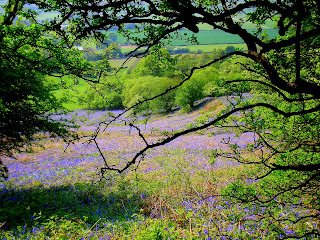 The views across are to the Black Mountains of which Skirrid Fawr is described as an 'outlier', and which we should be walking in the next stage of our long-interrupted Offa's Dyke trail. 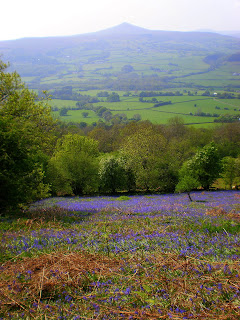 As you head for the gap between the two peaks, the scene opens out. To the right is the higher of the two summits, capped by Devonian-era sandstone rock which overlies soapstone. 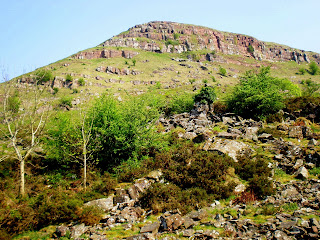 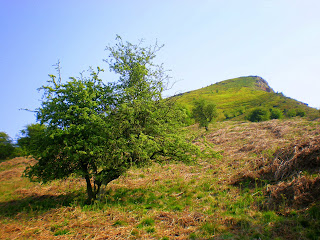 Then it's round the north end and up the hill to the trig point at 486 metres (1596 feet always sounds better), before which we were supposed to have noticed remains of an old chapel dedicated to St. Michael but didn't. More obvious were the bumps of an Iron Age fort like the one surmounted by the Herefordshire Beacon. 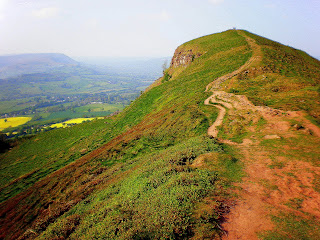 A more spectacular ruin we encountered on a May day round walk from Bredwardine, this time well within Herefordshire borders. This is Arthur's Stone, a cousin of the splendid Trevethy Quoit in Cornwall - to whit, a chambered neolithic tomb in fine nick, with about as much connection to the semi-mythical king as the Skirrid has to Golgotha. 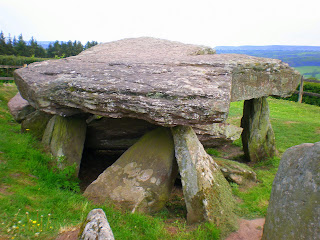 If the first walk was all bluebells and bracken, our second was gambolled-around by spring lambs 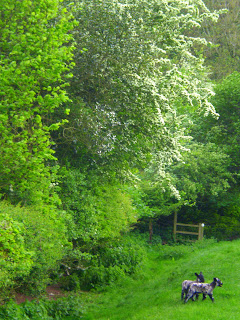 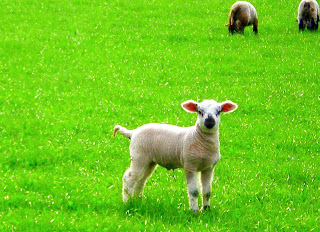 and marked by an especially beautiful return to the Wye valley, with solitary old oaks lining the descent. 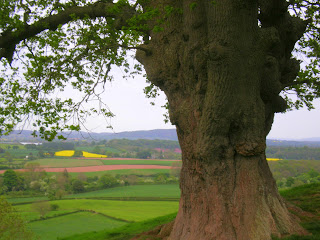 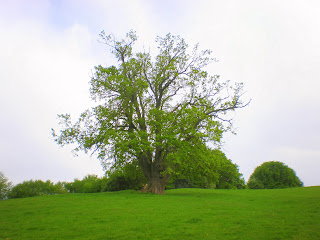 God's own county indeed. And you'll note it was looking rather green, thanks to a downpour on Royal Wedding night while the rest of the country stayed frustratingly dry.
Posted by David at 10:49

Glorious countryside... and not too far from where I went to school. While the time there was hideous, it was always fab to get out on my bike and go exploring.

I hope not quite as hideous as the one depicted in the stunning now ENO schoolhouse depiction of Britten's A Midsummer Night's Dream, Gavin - but at least it wasn't inner city hell (there's not a tree in sight at the Coli).

Believe me, it was grim. But there were at least trees.

Small point, but when you refer to the grafting on of religion to 'English' folklore, Ysgryd Fawr is obviously in Wales