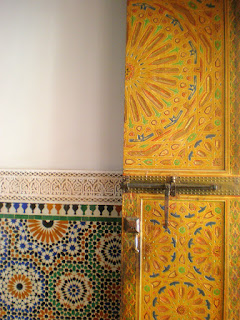 He may have been less than half a sun-king, but God knows the Alouite tyrant Moulay Ismail Ibn Sharif (reigned 1672–1727) went flat-out in emulation. Playing, as so many of those bastards did, on lineage traceable back to Mohammed always helps. Overloaded with 25 kilometres of threefold walls and gates enclosing palaces, gardens and water-features, the small town of Meknes looked set under Moulay Ismail to overtake the splendours of Fes. Which it did, for a while, but now - despite royal interest and investment - it's returned to slightly sleepy provincial status. The Lisbon earthquake didn't help; after it the centres of power shifted to Marrakesh and back to Fes. 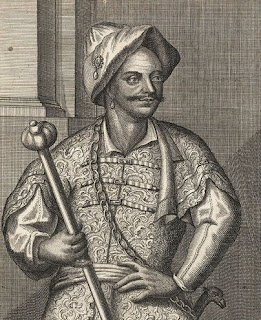 There was a low-level buzz when we were in Meknes because Mohammed VI - still popular, I'm told, partly because he claims descent, like Moulay Ismail (pictured above), from the Prophet - was about to arrive to preside over an international agricultural fair. Walls were whitewashed, flowerbeds watered and lines painted in the roads - I thought of Lewis Carroll's hapless card-courtiers painting the white roses red for the Queen of Hearts - but you knew it would all go back to what it was once he departed (with rather more on his plate, as it turned out due to the Marrakesh bombing, than anyone could have imagined). 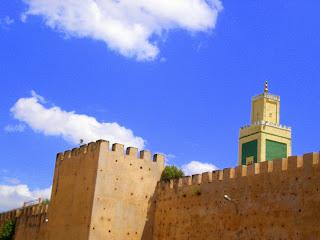 Moulay Ismail did in fact have dealings with Louis XIV, but through an ambassador. Picture his indignation at the outcome: 'I asked for one of his daughters' hand in marriage and all I got were four lousy longcase clocks'. They stand in the corners of his surprisingly unimpressive mausoleum. You're only supposed to be able to see two, but the others can be glimpsed through a grille - here's one. 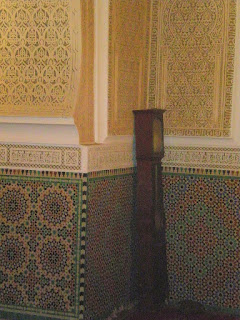 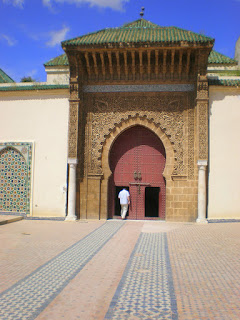 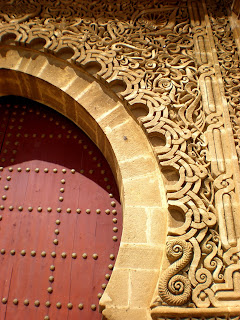 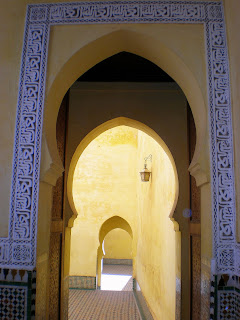 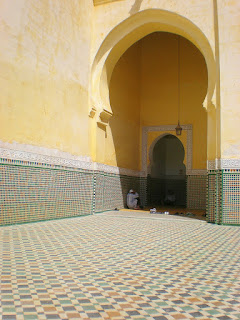 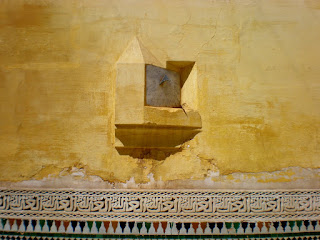 Exactly how much of the work is the result of Mohammed V's 1959 restoration I don't know, but it's only thanks to him that we farafins can get to glimpse the shrine at all. It's only one of three holy places open to non-Muslims - all this thanks to a misreading of the Islamic decree that foreigners should not be allowed inside mosques et al on Fridays. But every day is non-viewing day for the infidel in Morocco, unlike many other countries we've visited. One good reason for not going to Fes; I do so want to see inside the Karouine Mosque there. Anyway, here's splendour enough, if not on a par with Istanbul or Isfahan: 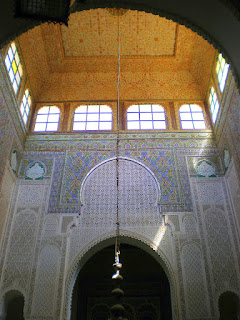 The pillars are not, like the ones which support the Bab Mansour, plundered from Roman Volubilis, but obviously fashioned afresh - from Italian marble, it turns out, exchanged for sugar on an ounce for ounce basis (I love the tales of salt-for-gold swaps, carried out in the highest secrecy in the middle of the Sahara). 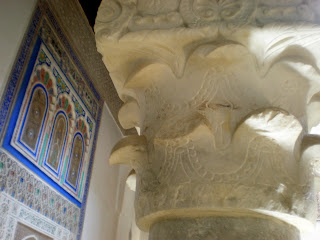 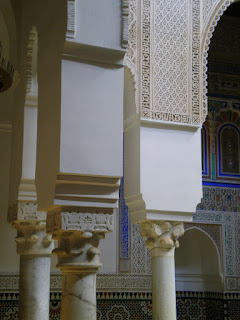 Other than this, there is size but not much splendour to be seen in the Imperial City. The mind boggles at all the statistics, no doubt exaggerated by legend: 10,000 enemy heads hung on the walls; 25, 000 slaves used (and mostly disposed of) in the construction - which makes the accidental deaths of Louis XIV's Versailles projects seem like childsplay; 859 kids, for which Moulay Ismail holds some sort of record; 30,000 killed in the campaigns which gave Morocco a greater degree of independence. I shouldn't forget the 150,000 members of the Black Guard, a sort of Moroccan oprichnik or iron ring. They hung out in the stables and granaries. There is, it's true, something impressive about the ruins of the stables with their 23 naves (room, forgive another statistic, for 12,000 horses). 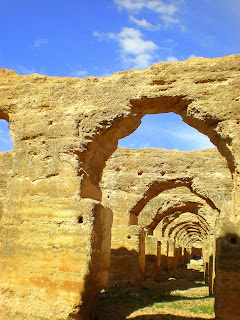 It was here that my dear companion had a familiar fit of touristic ennui, thunderously opining that even Doctor Johnson's celebrated 'worth seeing but not worth going to see' wasn't applicable to this not even very ancient pile of rubble. Equanimity returned just beyond the crumbling walls by the Aguedal Basin, a nice place of repose for the Meknesi, or whatever you call them. 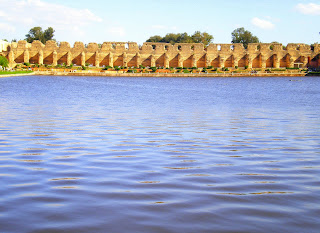 You can take a horse and carriage to get this far, but we preferred a half-hour walk. I'll be boring you with more gates in another entry, so let's get some of these out of the way. I've no longer got the detailed French guide, but these are all in the north-east quarter of the imperial city 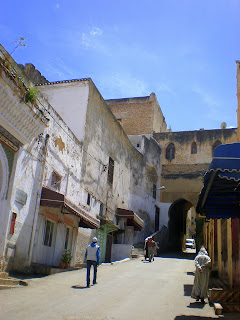 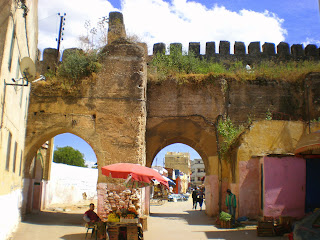 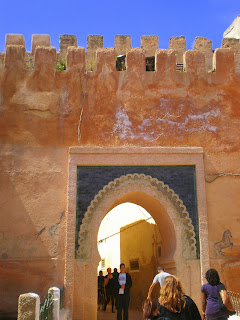 and, passing the nesting storks on all that's left of the old imperial palace, 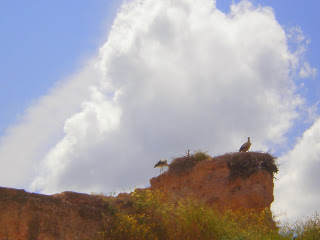 you walk (or ride) through the Bab el Rih 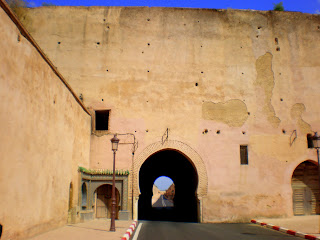 to get some idea of the grim monumentality of it all. 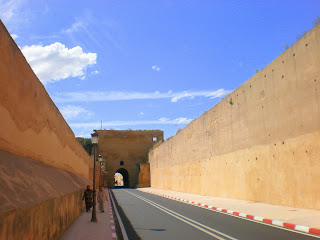 Give me the human touch of the medina or the ruined charm and location of Roman Volubilis any time. But those are for another day.
Posted by David at 11:59

"It was here that my dear companion had a familiar fit of touristic ennui, thunderously opining." Oh, I recognize this, though in our house, the comment might be a little more prosaic, on the order of can we get the *** out of here now?

Actually what I was going to ask was 'have any readers had similar experiences?', but I fear the usual near-total silence. So thanks for something of a kicking-off. My own road to Damascus (or the other place) was on a third visit to the Forum, when I suddenly sat down on a bit of old ruin and squawked that I was fed up tracing it all with a Blue Guide.