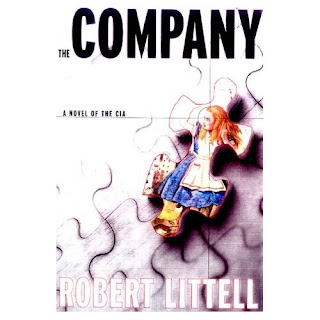 Someone in Robert Littell's CIA epic The Company is obsessed with Through the Looking-Glass, and What Alice Found There: a nasty piece of work, as it turns out, with a queasy side-line in maintaining a household of pre-pubescent girls.

The literary references are what one might expect from a master plotter whose earlier novel, An Agent in Place, keeps Akhmatova very much to the fore (son Jonathan of The Kindly Ones is very much in his father's mould, though with loftier ambitions). Sacred Anna pops up quite a bit here, too, but one senses market forces more doggedly at work in the cruder delineation of relationships and plenty of bad sex.

There wasn't, for me, much of a mystery in the leading question (who is the mole within the CIA?) Given the limited lead dramatis personae, the possibilities have to be whittled down fairly quickly - though there's a twist. Yet, though it's hardly Tolstoy or even the novelistic equivalent of the sublime West Wing in its broadly-brushstroked characters, you've got to admire Littell's sweep, showing us how the objectives shifted from Berlin to Budapest, the Bay of Pigs, Brezhnev's Soviet Union, Afghanistan, Gorbachev's Russia. And through all this historical personages are deftly woven, the Kutuzovs, tsars and Napoleons of late-20th century history. 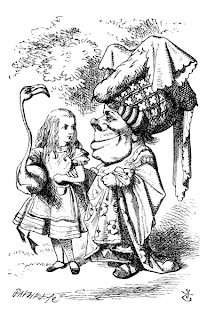 I've been steeped in Alice and will continue to be so next week when we go to a Wonderland-themed 'unique dining experience' as part of the Norfolk and Norwich Festival. Cursed the fact that I didn't book tickets for the Royal Ballet's Alice's Adventures in Wonderland, its first new full length-ballet to a commissioned score in 20 years. But now I get to write about it for Opus Arte's DVD release, and for that I had the great pleasure of talking to choreographer Christopher Wheeldon as well as seeing the film.

It may well be that disappointments voiced by some of my colleagues at the Royal Opera House are mitigated by the close-ups which allow us to concentrate more on the delightfully expressive Alice of Lauren Cuthbertson (pictured below in the first of two Royal Ballet production images by Johan Persson in a scene which works superbly well on DVD). I actually think it's bold to try and tell as much of Carroll's first Alice book without overloading the scenario with looking-glass characters (even then I still miss the Gryphon and the Mock-Turtle, but as Wheeldon points out, by the time they appear he's decided to tighten the focus on the Queen of Hearts's court). 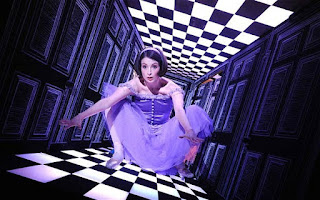 Too many special effects, not enough dance? I don't think so - again, there's much more formal choreography in Act Two, with Zenaida Yanowsky's consummately funny Queen/Mother (below) doing a genuinely witty parody of the Rose Adagio. But there's certainly old-fashioned magic achieved through contemporary means for Alice's fall, a lovely homage to the Sleeping Beauty Panorama as she and the White Rabbit (Edward Watson, full of twitching neuroses, anything but bunny-cute) travel through the forest - Wheeldon says I'm the first to pick up on that - and brilliant puppetry to manipulate the components of a giant Cheshire Cat. 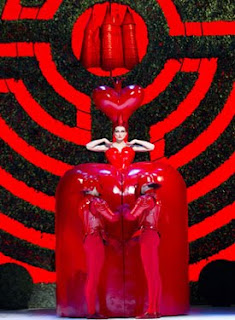 Joby Talbot's score glitters, snaps and coruscates, taking its tinta from the obsession with time passing. No great melodies here, but plenty of contrast, and some pathos, too, especially for Alice's 'lost' solo towards the end of Act One. I liked the Caucus Race Polka, too, and thought it bold to try and feature that episode at all, though many folk seem to hate it. Anyway, the whole thing is very classy indeed, as you might expect from a company on top form. What will happen after the departure of gracious Dame Monica Mason, and who'll take over? Wheeldon, I note, is among the candidates.
Posted by David at 09:35

In considering Carroll and Alice Liddell, one should bear in mind that the time was pre-Freud. Indeed that makes any analysis more interesting.

One aspect is that at that time Fellows of colleges (very confusingly called Students at Christ Church) were not allowed to marry ( they had to leave, often for a parish, on marriage): but the Dean (Liddell) was. So there were probably quite a few Students who looked - shall we say with pleasure - on the Dean's ten children (five boys, five girls)

Strictly pre-Freud: but you had all those literary forbears probing the depths, all of whom Freud was happy to acknowledge as having got there first.

Wheeldon pushes not Freudianism but the notion that Mrs. Liddell was a pushy nightmare, hence turning up as head-chopping Queenie. No idea whether this is based in fact or not.

I can perhaps assist on the point about Mrs Liddell -

From the Masque of Balliol:

This was the second version and the first was less critical:

I am the Dean of Christchurch, Sir
This is my wife, look well at her
[as before]

The Dean was indeed a tall man

Loved the unlikely yet a propos segue from Littell to your own time spent with Alice, and am particularly curious to know what could have been on the menu for a "Wonderland-themed 'unique dining experience' as part of the Norfolk and Norwich Festival"!

Dormice with honey, perhaps, alla Romana? What will be, we have yet to see...