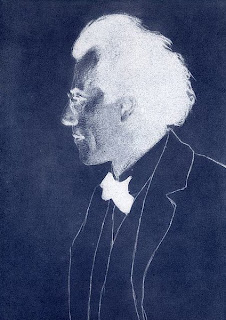 Forgive the rather pretentious borrowing from another great genius's meditation on death - the hallowed words of Elgar's Gerontius via Cardinal Newman - but they seemed appropriate as we near the hour of Mahler's death exactly a century ago (at midnight on 18 May 1911 if Alma's memoirs are to be believed). Gavin Plumley has been taking Entartete Musik through a day-by-day chronicle of the events leading up to the untimely demise, so anything I could say on the biographical details would be superfluous. Still, I see no harm in re-cycling one of my photos of the grave in Grinzing. 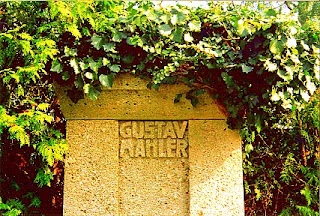 I'll be talking on the Resurrection Symphony tonight in Birmingham. In a way I wish the concert I'd been accompanying featured the Cooke completion of the Tenth, but at least Oramo's done that already in this cycle; other orchestras, disgracefully, have left it at the fully-scored opening Adagio.

The CBSO players seem quite excited by the fact that the estimable Sakari Oramo's replacement tonight is Kazushi Ono (pictured below by Eisuke Miyoshi). I know from experience that he's very good indeed, but I had no idea he was this good: to quote a string-player who e-mailed me last night, 'Kazushi Ono is an absolute genius - today's rehearsal was the most extraordinary day's work in my career since I played for Svetlanov back in the 80s. I think you are in for a treat'. 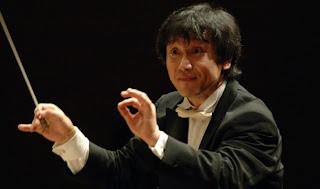 Hope so*. In the meantime, as a calm Mahler memorial I rather perversely offer you a piece the existence of which I was unaware until the doyen of BBCSO horn players, Chris Larkin, introduced it to my class last night. More on his extremely enlightening history of the horn anon, but here's Bruckner's simple but absolutely ravishing Abendzauber (Evening Magic) for four horns, tenor soloist, male chorus and three soprano 'yodellers' (for which in this instance read three opera-singers). Can't you feel the depths and heights of an Austrian landscape in this music? Jessica, if you're tuning in, could you tell me that you don't dislike this little slice of heaven-on-earth, please?

*we were. See Arts Desk review. Tried to lead a standing ovation, and my neighbours joined me, but the Birmingham audience doesn't rise as readily as the Americans. What does it take, I wonder?
Posted by David at 10:56

The Bruckner really is a gorgeous piece - why have most of us never heard it before?

I agree ( though the aerobic conductor is a little distracting)

Had one been a witness to the Bruckner v. Brahms fixture, on whose side would one have been? [ I know that the answer should be not to take sides......]

A beautiful piece. I'm so glad to learn of it.