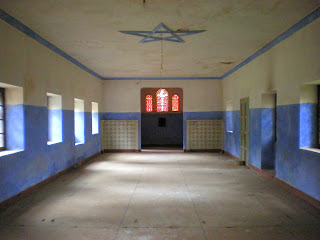 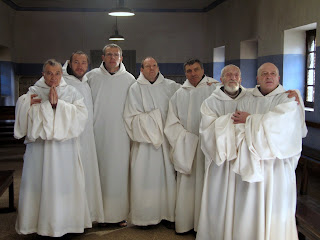 By serendipity, I'd just watched a second time what I can only describe as a great masterpiece of cinema, Des hommes et des dieux (Of Gods and Men), and written an all too brief precis review of its DVD release for The Arts Desk when I discovered that where we were going in Morocco was only an hour and a half's journey away from its location. Director Xavier Beauvois couldn't film in Tibhirine, the Algerian monastery from which the Trappist inhabitants were abducted to be murdered in 1996, so he chose a potent equivalent in the middle Atlas mountains of the neighbouring country. 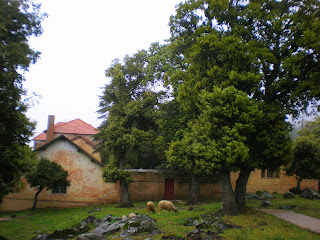 Potent because Tioumliline, named after the source of the river which flows down to the town of Azrou from this altitude of 1500 metres, also seems to have been a goodly experiment which ended in a dissolution, albeit a less violent one. Like Tibhirine, Tioumliline had its dispensary giving free medical treatment to villagers in need, and helped provide food when harvests failed; and again, there seems to have been no missionary intent, just a faithful imitation of the bounty of Christ. According to my Rough Guide, the local who now lives in the dispensary, Monsieur Boudaoud, remembers the monks with great affection; but despite the harmony that existed between Muslims and Christians, and the value of the monastery's library to students at Azrou's famous Berber College, the governing Istiqlal party closed it down in 1968 - not the mid-1990s, please note, Rough Guide - on the grounds that the monks were proselytising. 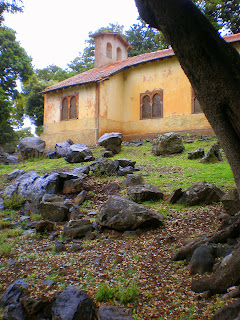 What stands now is a ruin in remarkably good shape, perhaps because the film crew may have restored certain elements when they came here a couple of years ago. It was totally deserted in the rain when we arrived - no sign of M. Boudaoud, only a couple of child shepherds shouting to their flock nearby - so having walked up the steps from the minor road through the holm oaks some five kilometres above Azrou (we walked the long way because the footpaths aren't signed) 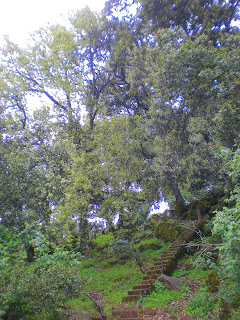 we found our way in to the chapel. It's very much as you see it in the film, minus the benches, the lamps and the chanting bodies. Below the modern stained glass which plays such a prominent part in the film 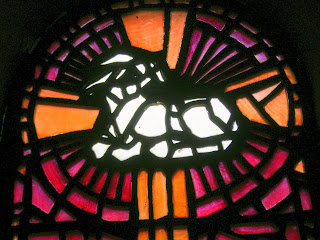 is the aumbry, which combines elements of Moroccan carving both when closed 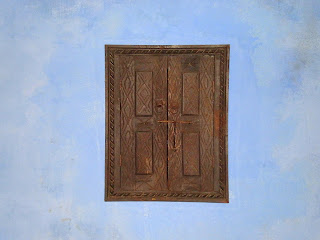 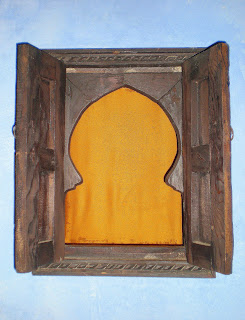 I think I'll spare you a corny little tribute to the spirit of place, complete with 'Kyries', but the sequel film will give you some sense of how heavy the rain had become by the time we decided to leave the sanctuary.

No wonder there were signs of sheep having sought shelter within. The view, already disappearing when we arrived, of a farm and a distant Azrou 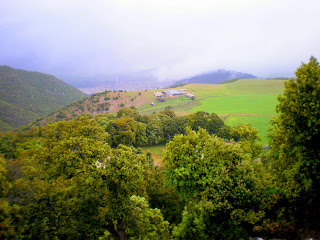 was now non-existent. Our walk back was a real penance, as driving wind lashed hail against my poor supra-orbital fracture and dizzied me with the pain. One reward was the friendly shrug of 'what can you do?' from the equally drenched Berber making his way back up the hill. Moroccans really do have the most candid, open smiles if you can engage them or share in a bit of suffering. Because J's only trousers were wringing wet, we couldn't go down for supper at Azrou's Hotel des Cedres - the voluble waiter kindly brought it to the room - and then I did go down, with a chill, and threw up a couple of times once we got back to Meknes. So I'm not sure our planned trek would have happened anyway. But since the rain was still torrential the next morning, we gave up on that, sat for an hour in the best patisserie of our trip hoping in vain for the skies to clear and then, having taken a quick soggy spin around Azrou to see the rock after which it's named, 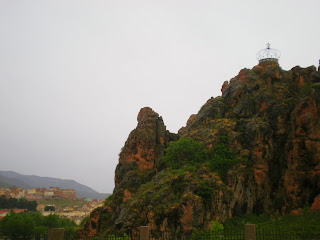 caught a creaking, fumous bus back to Meknes. There, once I'd been sick in the souk on the way back to the riad, Mouna was on hand to provide mint tea and sympathy. And the next morning I was right as...rain, which finally gave way to the brilliant sunshine we'd enjoyed at the start. Wouldn't have missed that little pilgrimage for the world, though. And we watched Of Gods and Men again with Sophie and Keita chez Lahboul, being struck more than ever by the craft which a first viewing so carefully conceals. The Swan Lake Last Supper scene with the headshots is one of the great moments in cinema - I still wept even though I knew it was coming - and I think this time we admired the ensemble work even more; Lambert Wilson and Michael Lonsdale seemed to dominate less. Here's a superbly detailed royal review by my old colleague Jonathan Romney. 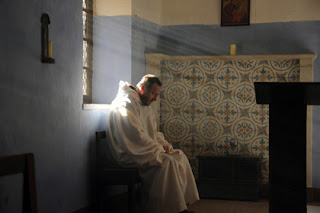 I'd still like to see the screenplay published; in the meantime, I select two great quotations. One, especially pertinent for this momentous week, is when Brother Luc quotes Pascal's 'men never do evil so completely and cheerfully as when they do it from religious conviction' (you have to admit, though, there never seemed anything cheerful about Osama Bin Laden. Maybe five-year old Cecco had a point worth remembering in charity now when he asked his mum Mary 'didn't Bin Laden have his feet tickled when he was a little boy?'). The other is the conference with the community and the Islamic elder when Brother Celestin says 'we are like birds on a branch: uncertain when we'll fly away', and a village woman quietly says 'We're the birds. You're the branch'.

In Pascal's "Men never do evil so completely and cheerfully as when they do it from religious conviction" I would think that "cheerfully" simply means with a happy heart, sure that one is right. In the video of Osama bin Laden taken shortly after 9/11 he was very content with his "success", discussing calmly and positively the fact that he alone amongst those planning the event had forecast that the heat of the fire would melt the steel structures and lead to the collapse of the towers,not just to their damaging. Rather like a College don describing a successful experiment (except that he referred often to "Allah, may His name be praised")

Voltaire put it best: "Those that believe absurdities will committee atrocities"

Actually it's 'joyously'. I checked the original and the quotation is: 'Les hommes ne font jamais le mal si complètement et joyeusement que lorsqu’ils le font par conviction religieuse'. Having put 'Pascal les hommes jamais' into Google, the first ref I found was a blog with the quotation as heading and a picture of the twin towers with 'joyeuse' written with heavy irony underneath it.

Yes, and I would say that watching bin Laden after 9/11 could lead to a judgement that he was "joyous", as a man would had succeeded in a difficult experiment. I have no doubt that he awoke each day with a feeling of vast satisfaction, and that this was a deep joyousness, not a superficial jollity, which makes the point very much more valid, whatever word is used.

We live in France not far from the home of Hubert, the brother of Christian de Cherge. We heard him speak about his brother's committment and love for the people of Algeria. This was after a screening of the film and he was naturally very emotional. It was the second time that I had seen the film and it had just the same impact and left the same deep impressions as before. I agree it is a masterpiece of cinema. Hubert was with Bishop Turini who had recently made a pilgrimage to Tibherine. They answered questions afterwards and I recall two in particular. Someone asked them what, in their opinion, was the reason for the film's success? Bishop Turini's answer was that it was because it is such a human story. I completely agree! The director has succeeded in telling the story without imposing his own opinions and he allows you to understand that their decision to stay in spite of the growing threat from extremists, was taken for a series of individual reasons not necessarily inspired by their faith.
The other insight which came from Hubert was that the ending was not as it had originally been conceived in the script. It seems that it evolved in discussions which included the actors as filming progressed. I think that it would have been impossible to finish a film, which shows the peaceful nature of the monk's lives with an act of violence. It was far more fitting for them to disappear peacefully into the mist,as they had lived, muslims and christians together.
On the first viewing the beauty of the Last Testament of Christian de Cherge, which ends the film, passed me by. My French was not good enough to absorb it, so I found a translation and posted it here http://johnpreedy.blogspot.com/2010/11/seven-monks-murdered-in-algeria.html

Many thanks, John, for that eloquent appendix - it reinforces what the nieces and nephews of three of the monks say in the little documentary that comes with the DVD release.

I too was deeply moved by what was read in the film of Christian de Cherge's testament and found the complete text on a site called 'Monastic Interreligious Dialogue'. Duly posted the link in the previous entry linked to here towards the end, if you see what I mean. Will duly look at yours in context.