In such a square as this... 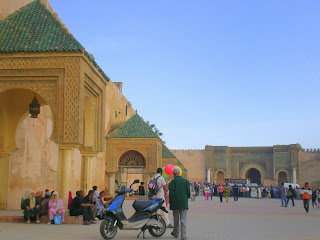 ...16 people, mostly tourists, were killed, and 23 injured, by a bomb in a popular cafe two days after we left Morocco. The square in question, as you probably know by now, was Djemaa el-Fna in Marrakesh, a world heritage site which still, though of course tourism is at the forefront, remains a beacon for the old Moroccan traditions of story-telling, gymnastics, fire-eating and snake-charming. It makes me sad to think of the dent this sorry, most likely al-Qaeda sourced, act of terrorism will have on humble cafe-owners and hoteliers in a country which hovers on the brink of some prosperity, despite high illiteracy rates, political corruption and a huge gulf between rich and poor (not sure even in India I've sat and eaten while an old woman waited for the leftover bread from the table). 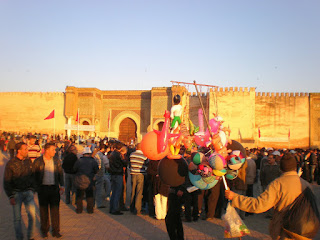 I don't know how it is in Marrakesh, but here in Meknes's Place el-Hedim, once the entertainments start up in the late afternoon, the foreign tourists have mostly moved on - Meknes is more of a daytrippers' destination, though it deserves much, much longer - and the crowds that gather seem to be native (though many may of course be holidaymakers too). I wonder if the bellringing watersellers with the exotic hats ever sell any of their Adam's ale, though. 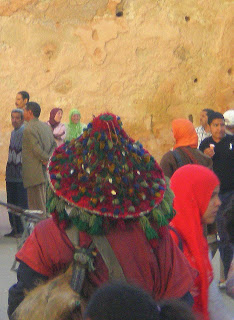 Meknes's heart has no happier a history than most of the other grandiose buildings and the 25 kilometres of slave-built walls created by the tyrant Moulay Ismail (more on him and his palaces in a future entry). Like an English lord on his country estate, he cleared away a swathe of the medina which still flourished all around it to make a forecourt for his palaces, dominated by the great gate, the Bab Mansour, you see in the distance. The title means 'square of demolition and renewal', and here were deposited marble columns from the wonderful Roman site of Volubilis - again, a worthy future subject - and other ransacked palaces. 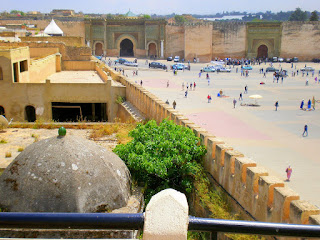 Now it's very much for the people - and for a lower-key ripping off of tourists than you'll find in Fes and Marrakesh (we learnt our lesson after arguing over an unpresented, made-up bill in one of the more touristic cafes and thereafter always headed to the north-eastern corner for a more honest welcome). For the evening action, sit right on the square; for daytime cool, mount to the top terrace of the Cafe/Restaurant Place Ladim. Again, remembered with fondness but some qualms, for it was just such a layered cafe-with-a-view, the Argana, that was the target in Marrakesh. On your way down the stairs, you discover with some surprise that there's a little mausoleum behind the square's east walls, with a graveyard-garden featuring colourful tombstones, on which this cat very tellingly posed: 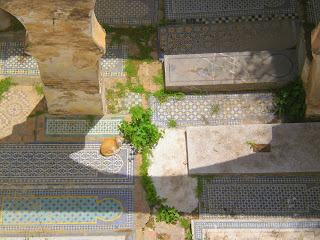 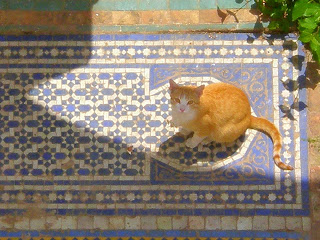 Slowly, from 5pm onwards, the handful of sub-Saharan medicine sellers who've been there all day under umbrellas finally finds a few customers for their animal-decimating potions among the ostrich eggs (J and Keita, who was there with our dear Sophie - back turned in between - for a couple of days, are privy to the haggling in the second picture) 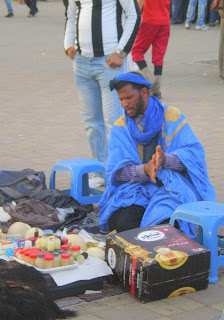 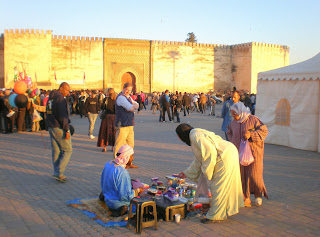 while groups form around diverse entertainments. The evening snake-charmer wasn't any better than the daytime one: a blast on the oboe-esque ghaitah, a fumble in a bag and then a draping of the unfortunate serpent around the shoulders of any hapless onlooker brave enough to endure it and pay. At least this one attracted a crowd, though the entertainment, such as it was, quickly palled. 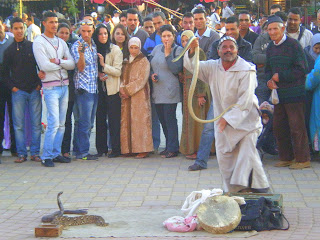 Same could be said of the acrobats - a couple of flips, a human pyramid, and that was it, presumably because the crowds move on to the next quick fix. 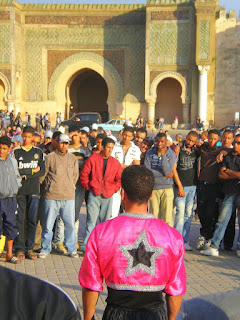 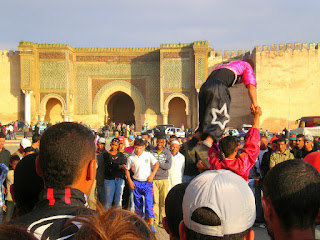 My Arts Desk colleague Ismene Brown reports ecstatically on a tighter, more varied show by Moroccan acrobats which was running in London during my absence. As for the jokers, one of whom made me a quick butt, and the storytellers, well, you'd need an Arabic or Berber speaker to make sense; but they came and went. And meanwhile the swallows swoop and scream, the storks fly home to their nests and human life goes on. 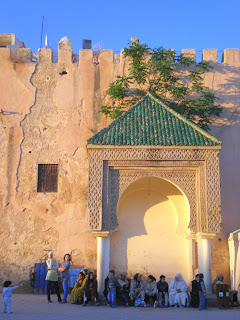 How far it all seems from any fanatical act of murder, and indeed from the man who's disseminated so much hatred and death around the world. Should they have shot him? Well, I wasn't there in Abbottabad - know it passing well, though - so I can't say, but I'd rather take the line of Josh in The West Wing, who would prefer imprisonment entailing subjection to a steady file of everyone, day after day, who'd lost friends and relatives to his campaigns. Please God, insha'Allah, no more retaliation now.
Posted by David at 15:18

"Please God, insha'Allah, no more retaliation now." You have put your trip to moving effect in this and the following post. I so agree with your sentiment here. Violence, it seems, begets nothing but more violence. Where is our Gandhi, our Martin Luther King, Jr.? We need their voice and their vision so very much right now.

Indeed - I did think at one time Obama might fit the bill, but his hands are so tied. His announcement seemed dignified enough, but it revolted me to hear of him and Hillary in the incident room of the White House, watching the killing. I suppose he had to, in order to quash the ludicrous conspiracy theorists as best he could, but still....

Anyway, the only thing to be thankful for is that this happened on his watch. He is, whatever people might say, still a good man.