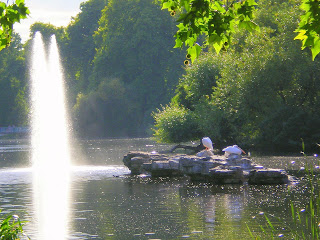 Cooler, certainly than New York or Ottawa, where friends are sweltering. But should a heatwave hit us this year - and for all the grumbling about the absence of the British summer, remember we had one early, for several months - there will be plenty of places to find shelter. The fountain in St. James's Park is cooling just to look at; those aggressive pelicans love basking in its spray when the wind whips it in their direction. And on my way to A Woman Killed with Kindness at the National, I finally took in the extent of the Southbank's homage to the 1951 Festival of Britain's seaside section. 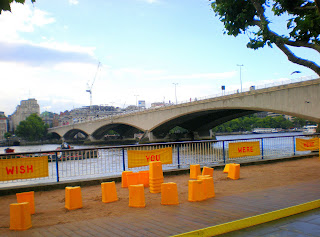 They reminded the public back in '51 that nowhere in Britain is more than 80 miles from the sea. The above beach, cordoned off by ungainly fencing after dark, is 70 metres long. The people of Southend-on-Sea contributed the world's longest strip of bunting and its Borough Council designed this rather pretty little garden. 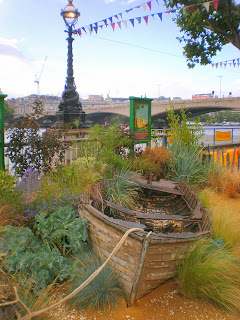 There's another up on the roof of the Queen Elizabeth Hall, created in partnership with Cornwall's Eden Project. It didn't look great when we visited it after the show, but the vegetable plots are thriving. 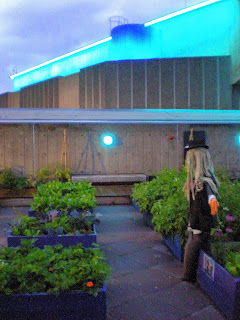 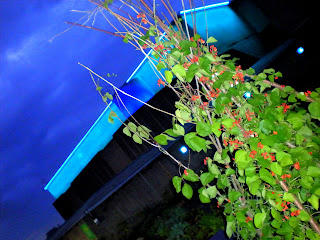 How much we miss when we're rushing about town. It's many years since I wandered the precincts of Westminster Abbey, but on my way to meet the diplo-mate in Smith Square, I ventured in to the cloisters again, passing under the lamp which hangs at the gateway in Dean's Yard. 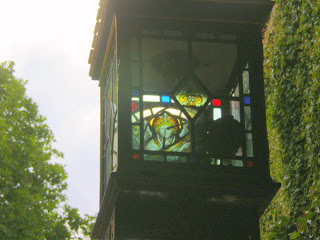 At 5.30 on a Friday afternoon, there was only the occasional spattering of tour groups, and a handful of folk sitting peacefully on the stone benches. What handsome views, too, out on to the Abbey's buttressed south side. 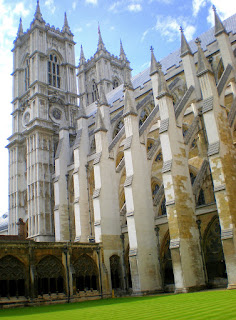 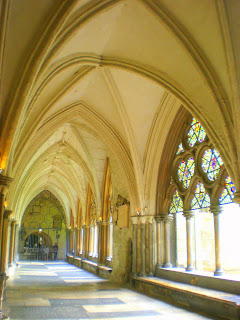 I walked over Clementi among others, one of 200 graves and monuments in the cloisters alone, on my way to the Quiet Garden in the Little or Infirmary Cloister, 17th century but much restored after WW2, with a view over to the great tower of the Houses of Parliament, always glowing in late afternoon sunlight. As the years go by, I only marvel the more at what a miraculous complement to the old Abbey is Barry's and Pugin's Victorian Gothic. 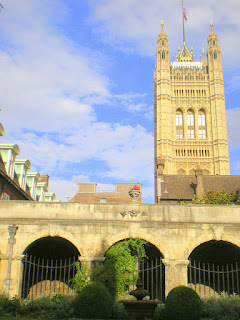 On which note, I can't resist adding that the highlight of our ultimate destination, supper with our good friend Ross Alley in Marylebone High Street, was his sudden whipping-out of a set of Queen Victoria's underwear, a legacy to dear departed Betty Beasley, the great lady with whom he lived for so long in Harley Street. They're absolutely enormous - that mightly little empress was as wide as she was tall - and I won't embarrass Ross with a shot of his demonstrating that fact, so you'll have to be content with a glimpse of the royal insignia. 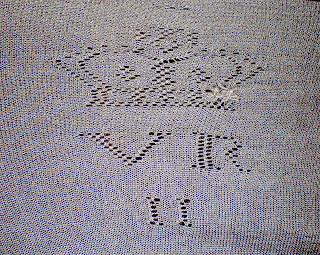 You see David, it is little walks like that in Rome surrounded by ancient monuments that I will miss in Ottawa. London certainly has a lot of such places full of history which offers so much to you, if only at the visual level.

Buon viaggio e arrivederci Roma, Laurent. The hounds and Will should console you.

At what date were the Royal ( and possibly Imperial) undergarments made? After 1st May 1876 Victoria was Empress of India and signed herself always and definitively "Victoria RI" Are the two II at the bottom of the picture relevant to this?

Also. as regards ladies. normally the rule " the older the wider " applies

No idea, Sir David. Will ask Lord Ross. It was J who said I should change 'regent' to 'empress' in the text...

Victoria regarded herself as an empress before she was officially made up. ("I am an empress, so why should I not be called one ?? !! " - Disraeli obliged)

Her doctors ( male ) never got a look beyond the undergarments - or indeed the garments. Only after her death did her doctor in chief have a chance to make a detailed investigation. However she died of old age so history was not affected by this particular barrier to medical efficiency

Victoria reigned for 63 years and seven months and two days ( arithmetic not guaranteed). So the present Queen has to reign until September 9th 2115 to be the longest reigning monarch in this country and the longest queen regnant anywhere