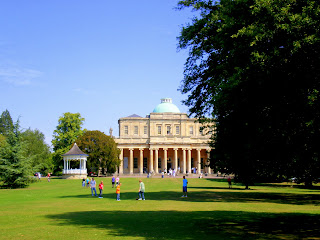 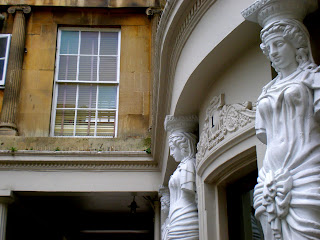 Between the estates of Pittville to the north, sloping up to the glorious Pump Room (top), and Montpellier with its caryatids to the south, Cheltenham's midriff has been much cut in to and scarred. And there's a bit of an underbelly, too: I was tickled, if slightly horrified, to hear my friend Jill tell how she and other Cheltenham Ladies College girls were NEVER allowed, under any circumstances, to walk down the High Street (common? dangerous?). Isolated pockets of prettiness exist in the centre, but more often there's compromise: Royal Crescent, the earliest terrace completed in 1810, for instance, has been cut in to by the bus station.

We were there two weekends ago so that I could cram in seven and a bit festival concerts over two days (duly written up on The Arts Desk; and very remarkable they all were, in total or in part). I suppose I'd been expecting an urban layout as compact as lovely Göttingen, one of its twin towns, but I was quite wrong; it took us 45 minutes to walk from the station to the Pittville Pump Room. Göttingen, incidentally, has a Cheltenham Park and a street named after one of the Gloucestershire worthies; and though it has a Handel Festival, he probably never went there. Whereas the ailing old composer did visit Cheltenham Spa in its infancy, when it was run by one Captain Skillicorne. His great-grandson, William Nash Skillicorne,first mayor of Cheltenham, lived in Queen's Parade (below) which has a blue plaque to prove it, if anyone's interested. 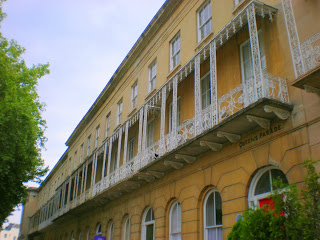 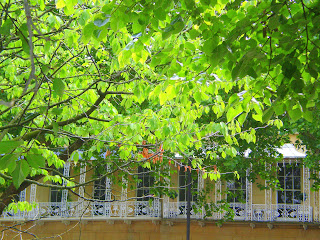 Royal Parade nearby is perhaps the handsomest of the many terraces, and David Verey in the Pevsner guide is right to command its facing 'in a particularly beautiful coloured ashlar'. 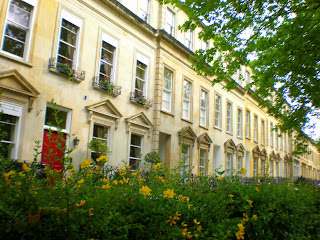 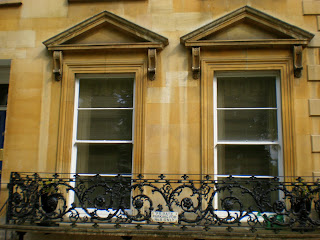 Parallel with Royal Terrace is Montpellier Walk and the big, beautiful garden square which goes one better than Imperial Gardens just to the north. The whole caryatid industry started with the ones placed at the bowed entrance to Montpellier proper, which the plaque says were modelled by 'the London architect Rossi'. So this obviously can't be the same one as the Petersburg Rossi, and yet so many Cheltenham buildings seem like a miniature version of what he achieved in the then Russian capital. Anyway, the extra caryatids were created by 'W G Brown of Tivoli' to grace the fronts of the shops which replaced - ah, poor substitute - the trees of Montpellier Walk in 1843. 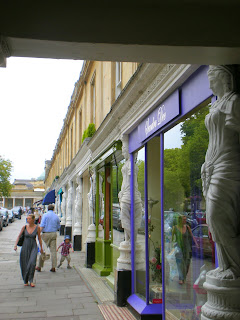 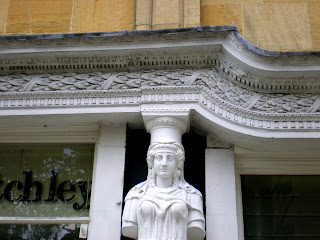 Imperial Gardens to the north is as much of a half-square, terrace-wise, as butchered George Square in Edinburgh (where at least we used to have the advantage of looking out over beauty from the David Hume Tower). Here they honour Cheltenham boy Gustav Holst, whose house-museum I only got to see from the outside (it boasts the piano on which he composed The Planets). 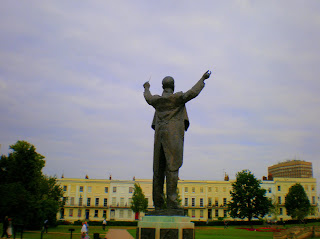 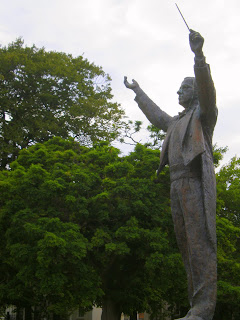 Walking more or less north, you get the benefit of the tree-lined Promenade (though the shops and the eateries are uninteresting), cross the High Street off which is Cheltenham's only old church, St Mary, and enter no-man's-land for a bit. Though I liked the deco look of this ruinous old cinema, up for sale. 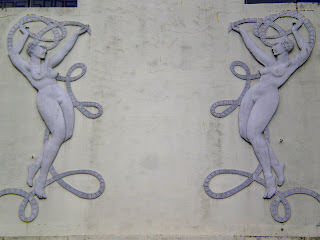 Finally the gates of Pittville loom; just inside them was our potentially noisy - no soundproofing - but actually, when it mattered, very quiet and comfortable hotel, The Townhouse (recommended). Developed by Joseph Pitt in the 1820s, it's villa-rich, though in that respect it grew in quite a jumble of styles. Apsley House in Pittville Circus mixes Doric porch and round tower 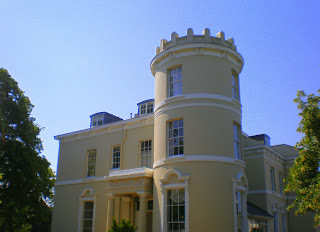 and there's some fine architectural detail further along the Circus. 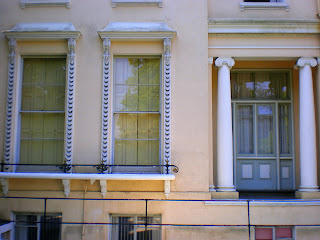 We walked this way to see John Middleton's masterpiece of 1868, All Saints Pittville, but there was a service on our first visit and the church - despite intelligence to the contrary - was locked when we returned later.

The lawns and limes beautify the villas around the park itself (and I can't recommend too strongly the coffee and cakes in the little pavilion, an eco-conscious cafe, the only one we discovered). Up Pittville Lawn you move from the Tudor-Gothic of Malden Court 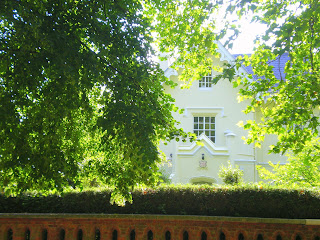 to Dorset House, with its splendid acanthus finials and lofty Ionic columns 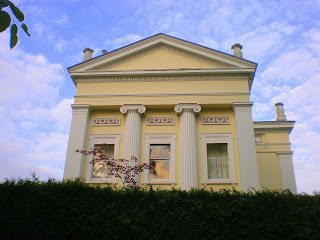 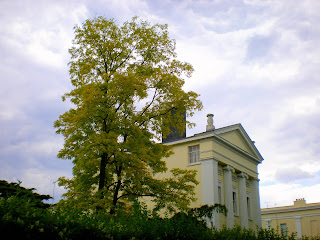 Then you're at the Park proper, beautifully landscaped in 1830 so that the Pump Room can be glimpsed across the lake 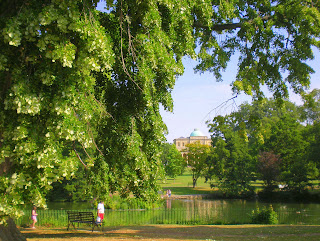 with its handsome stone bridges by John Forbes. 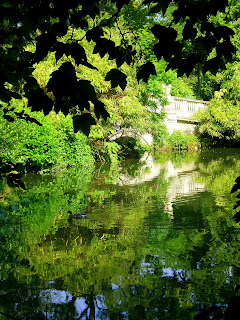 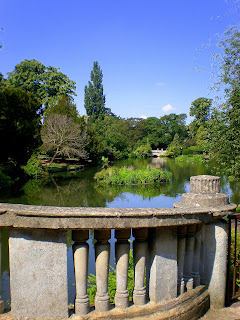 Yes, I know, the Pump Room designed by Forbes for Pitt, 1825-30, has its detractors, famously Hugh Casson who is quoted in Pevsner as describing it 'alas, with some justification', as 'stilted, high-shouldered and rather graceless'. But the ashlar again is a handsome colour, and the colonnade copied from engravings of the Temple of Ilissus striking. 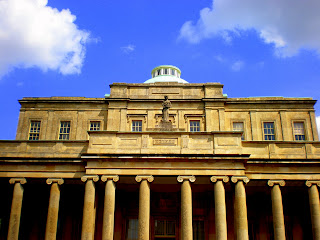 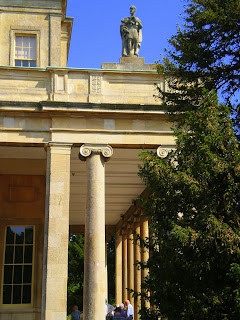 The dome is the glory, to which the eye is ever drawn in the midst of chamber concerts - fine paterae and a welcome gallery just beneath them. 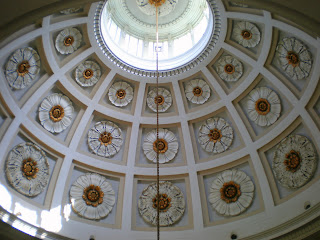 From up there I managed to listen to Buniatishvili and the Escher Quartet rehearsing just before their programme, in which I only had time to hear a predictably remarkable performance of Prokofiev's Seventh Piano Sonata before catching the taxi to catch the train to catch the underground to pick up some CDs at home before haring off to take the afternoon class on Massenet's Cendrillon, collect the goddaughter at Euston and go on to the evening City of London Festival concert in the seriously weird Drapers' Hall. The schedule was a bad idea in terms of short-term sanity, but worth it for Khatia's Prokofiev slow movement.
Posted by David at 10:05