My one-time sage, if capricious, Meister when I assistant edited Music and Musicians all those years ago, Robert Matthew-Walker, was there at Monday's Prom - sitting in the Arena bar during the interval like a fixture of the Royal Albert Hall with his old pal Malcolm Smith. Both had been present at the first UK performance of Prokofiev's Symphony-Concerto with Rostropovich and Sargent in 1958 (NOT at the Proms), and both were well satisfied with what they'd just heard: 'a very fine performance of the greatest work for cello and orchestra of the 20th century', proclaimed Cap'n Bob.

So why have the Proms ignored it all these years? Bizarrely, the much less popular and less audience-friendly Cello Concerto No.1, which Prokofiev refashioned with Slava's help into what eventually became the Symphony-Concerto, HAS been heard twice in the RAH. Anyway, this strange omission may be the reason why they asked the evening's outstanding cellist, Alban Gerhardt, and myself to talk to Martin Handley before the Prom. The talk can be heard online on the Radio 3 Proms site, though not apparently outside the UK, and it's pointless me providing a link here because you'll be told you need all sorts of scripts which presumably you already have. It went with Aufschwung, partly thanks to Alban, who has very decided opinions both on the two works - which he is about to record with Andrew Litton in Bergen for Hyperion - and on Slava. Here we all are after the talk, with a startled-looking Martin on the left and Alban on the right:


You can read an account of his latest Proms experience on Alban’s blog, with its daunting command of idiomatic English (he lives in Berlin, where his father still plays in the Berlin Philharmonic, an option he once considered). His performance was astoundingly fluent, negotiating gear-changes so that the audience would never have noticed the problems inherent in the work, spot-on in intonation and hyper-brilliant at the very difficult end (in which the cello, in Alexander Ivashkin's potent image, seems to fly away from his enemies and enter heaven through the narrowest of gates). There's always a problem with where you sit in the RAH, if you don't brave the Arena which I didn't on Monday, and at the side with Alban projecting away from us I felt we weren't getting the full richness of his cello tone. Listening, however, to the snippets on his website, I was compelled especially by the slow movement of the Dvorak Concerto, which made me stop everything I was doing. I had to go and dig out Rostropovich's performance with Giulini, though I suspect the younger player would not approve.

I think there was a faint hiss in the audience for the talk when I said that I didn't 'get' Elliott Carter, whose very brief Soundings launched the Prom, and indeed I listened to it with interest, admiring the orchestral colours, without finding it had anything to say (Carla, who joined me again, this time with four 'A's in her A-levels and a distinction in Advanced English under her belt to send her on her way to Oxford, articulated the same feeling without my prompting). The Beethoven Pastoral Symphony after the interval was a total surprise, even though I know Ilan Volkov is a rather remarkable young conductor and has already done fine things with the BBC Scottish Symphony Orchestra. It bore out what we'd been saying in the talk, when Martin quoted Barenboim as advising his musicians to 'let the hall come to you'; this was a gleaming, intimate, mostly rather feminine interpretation, effortlessly phrased and always alive - what focused energy from the Scots cellos, perhaps inspired by their soloist, though it was a shame Alban didn't join the rank-and-file as he sometimes likes to do after his solo appearances. It reminded me what generalisations one makes about Beethoven being the cell-man, Mozart the singer of longer phrases, for the Sixth is so full of song and Mozartian warmth of orchestral colour. Even the storm didn't seem too threatening, and the shepherds' thanksgiving glowed.

The events of the past few weeks have steered me back on course with Prokofiev Vol. 2, happy in the knowledge that I have something to say and that my love for SSP is boundless. I've also been inspired by what is perhaps the best, and certainly the most idiosyncratic, biography I've ever read, Peter Ackroyd's enormous study of Dickens. I finished it on the way back from France on Sunday, and I'm convinced you have to read it in its entirety, rather than the easily-found abridged version, which is why I've taken this rather poor reproduction of the cover of the right edition to show you the one you should be looking for, a very heavy paperback from Vintage: 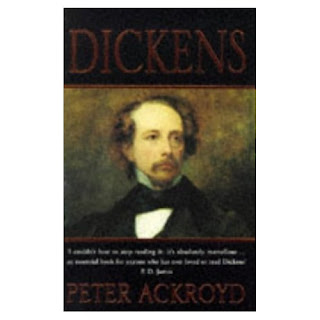 Herein is a character one can reverence for his deep humanity, even if like us all he reveals flaws in his personal life. He really practised what he preached, and of course his preaching is so eloquent. I felt compelled to copy down his wit and wisdom into my little black book, from which I select only one quotation. It's from a New Testament story he wrote for his children, never intended for publication and only emerging in print in 1934 (I found a good second-hand copy via Amazon). In it, he exhorts: 'Never be proud or unkind, my dears, to any poor man, woman or child. If they are bad, think that they would have been better, if they had had kind friends and good homes, and had been better taught. So, always try to make them better by kind persuading words; and always try to teach them and relieve them if you can...And always pity them yourselves, and think as well of them as you can'. There is, of course, one fatal instance in which he fell short of this command, in his complete emotional cut-off from his long-suffering wife Catherine. But for the greater good, he never compromised. We still need his tolerance, his energy and his humour today.

Finally, a very kind word from a stranger on a posting here made me realise I perhaps should not have hidden my latest, very modest light under a bushel, and, dammit, I am quite proud of the results. This is a little two-CD set with a hundred-page booklet from Naxos called 'Igor Stravinsky: A Portrait'. 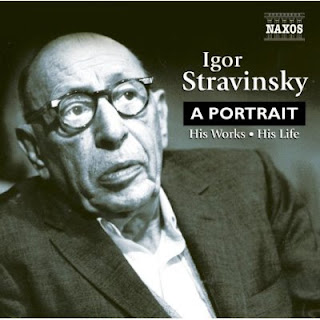 The generous reader from Illinois commended the text, but I'm perhaps even happier with the representative selection of music I was allowed to make from The Firebird to Requiem Canticles on the two CDs. We were especially lucky in that Naxos took over the Robert Craft recordings, which leaves them with a sizeable Stravinsky discography. It gave me the chance to get to know better the thorny dodecaphonic stuff of great Igor's last period, as well as such unexpected masterpieces as the Concerto for Two Pianos. Above all, here is another complex genius whose company, when he finally shuffles off this mortal coil, one is very reluctant to leave in reading of his life (and Stephen Walsh's two volumes can be very entertaining, though I'm not sure he identifies quite as strongly with his subject's humanity as Ackroyd does with Dickens). Zdravstvuytye!
Posted by David at 10:13