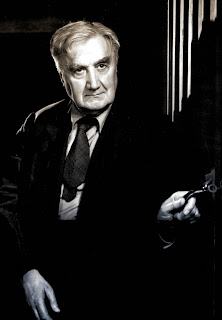 The great man (photo courtesy of the Vaughan Williams Estate via the Proms) died fifty years ago this Tuesday. There's already been a fair bit of remembering - or rather discovering and rediscovering - on this blog, and the Proms' mammoth tribute, conducted by who(m) else but Sir Andrew Davis (Richard Hickox, some would say, but not I, though I'm sure we'd all have happily settled for Vernon Handley, had he been well enough), offered further revelation. Of what sort I still don't know in the case of the Ninth Symphony, his enigmatic swansong. Similarly equivocal symphonic endgames by Nielsen and Shostakovich resolve, but this one doesn't: what means the finale by wandering on beyond its natural end? What are the galumphing forces that break across the flugelhorn solo in the slow movement (maybe something to do with the final scene of Tess of the D'Urbervilles which this was originally meant to illustrate)?

No matter; the answer is surely that there is no answer, that the old wizard was still experimenting with harmonies, orchestral colours (the flugelhorn, the three naughty saxes in the scherzo) and the Unanswered Question (is this perhaps death, and if so, what might it mean?) Davis once more obeyed, as had Volkov, that wise Barenboim injunction to 'let the hall come to you', and the BBC Symphony played soulfully for him throughout. He even managed sustained silences at the end of three works: for this, for the Serenade to Music - doesn't really work in this space, though good to hear voices of distinction in Sarah Tynan, Catherine Hopper and Joshua Ellicott - and for the unquestionable masterpiece, the compendious score for the ballet Job, in which the BBC woodwind proved they are the most distinctive of the London sections. I was sorry not to see a single one of Blake's haunting illustrations in the programme, so here's one so luridly complemented by the music of Vaughan Williams's Scene 4: 'With Dreams upon my bed thou scarest me & affrightest me with Visions'... 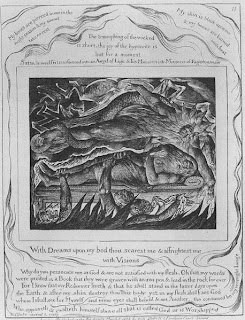 The Tallis Fantasia didn't quite work for me, partly because the audience had not yet been stilled and also because the spatial effects didn't come across. Interesting phenomenon, if obvious, that when the hall fills up - and the Arena was more packed on this occasion than I've seen it this season - the halo of sound disappears, along with the (for some pieces) worrying soft edges. So a shame there weren't more bodies for Janacek the other night. Whatever the pros and cons, they've got the visuals of a full Albert Hall platform exactly right, so here's a photo by Chris Christodoulou of (just a few of) the best of young British singers, the orchestra and Sir Andrew in the Serenade to Music: 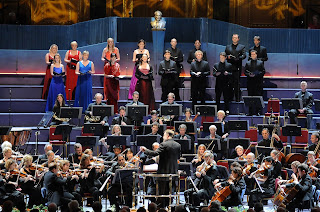 The whole event has prompted incomprehension from some of the critics, but there's poetry of the best sort in Ed Seckerson’s Independent review: he's one of the handful who know and love what they're talking about.

For me, too, this was an evening full of surprises. Job I'd heard live before - Tod Handley, dancing performance - so I knew the smoochy sax-comforter and the apocalyptic organ would have their effect. But I did feel privileged to be hearing the Ninth and even the Serenade for the first time in a concert hall, adding two more riveting new experiences to those already noted with the Piano Concerto and The Pilgrim's Progress. Onwards, then, to the Sinfonia Antartica, the Eighth and Riders to the Sea.
Posted by David at 12:59