The middle of humanity... 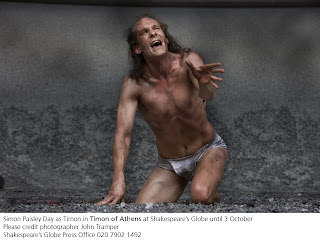 ...is something that never concerned this unfortunate gentleman. It takes cynic-of-choice Apemantus to tell Timon of Athens (Simon Paisley Day, pictured here by John Tramper in Lucy Bailey's production at Shakespeare's Globe) that neither his excessive, passive-aggressive generosity nor the extreme misanthropy to which it has indirectly led ring true for most of us: 'The middle of humanity thou never knewest, but the extremity of both ends'.

It's the kind of line that strikes like a bolt from the blue. Having puzzled over the earlier acts of this problem play, which turn out - some of them - to have been written by Thomas Middleton, I began to warm to the Lear-like rankness of Timon's curses. And then Shakespeare, as ever, strikes a sane note. The same sense of revelation happened to me in another difficult and mostly unlikeable work, All's Well That Ends Well, when the blabbermouth Parolles is stripped of all he had to live by and declares: 'Simply the thing I am shall make me live'.

So three cheers (or juicy curses) to the Globe for staging comfortless Timon, which I've only ever seen as Stephen Oliver's not very memorable opera. It turns out, I read after the event, that most of the elements I had problems with were Shakespeare's (and/or Middleton's) fault: the obscure settings-up of the early scenes - when in any case I was feeling dead tired from cycling through the treacle of a sticky London day - and the abrupt introduction of a character, Alcibiades, who should be Gloucester to Timon's Lear but never gets developed properly. I felt a bit antipathetic to the mishmash costumes, too, though the idea of crows or harpies stalking the net above us groundlings gathered power. Surely this timeless myth of profligacy and intemperance could work very well in modern dress? And Timon, though his character remains problematic, is a gift of a role to a great actor: all those speeches of disgust! Simon Paisley Day struck me as slightly too nice and civilised a chap to know the 'extremities', though he spoke the verse/prose very clearly. The whole experience reminded me why I love the Globe, which I'd deserted post-Rylance. We'll be back for Merry Wives on Sunday, as I guess it will be the perfect introduction to Shakespeare for the son of friends of ours. 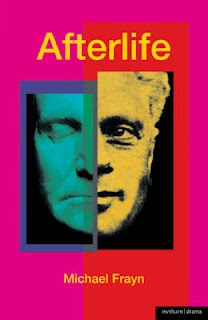 Another problem play about a man who never took the middle way, another event approached with no great hopes which possibly made me relish it all the more: Saturday saw the end of Afterlife, Michael Frayn's play so lambasted by critics and audience but too interesting and germane a subject - Max Reinhardt and the idea of Salzburg's now-immortal Everyman - for me to ignore. So I caught the last matinee, and found it mostly beguiling. Elegance is the keynote, which the director of Ariadne auf Naxos's backstage business would have admired: elegant designs by Peter Davison, elegant direction from long-term Fraynite Michael Blakemore, supremely elegant acting above all from Roger Allam and Peter Forbes (who played Herr Schultz all those years ago in the university production of Cabaret, wherein I twirled trays as a waiter alongside Simon Russell Beale's somewhat less dramatically gifted brother - now a doctor - Andy. We all knew quiet, self-effacing Peter would go farthest, and he has, especially now that he's coming up to the right age to play the older man).

So what have so many people hated? Apparently the slipping in and out of rhyming couplets (the Everyman style as rendered by Hofmannsthal and adapted by Frayn - though this is by no means an entire play in verse, as some seem to think); the fact that not much happens; the sketchiness of Reinhardt (apparently a man whom no-one really knew or understood). All I know is that while my companion and the distinguished actress who was her neighbour weren't impressed, I enjoyed it all. Am I too easy to please?

It was hard not to be happy on a glorious late-summer afternoon, at last, on the South Bank. Outside, Watch this Space, the ten-year-old festival of open-air theatre now enterprisingly run by Angus McKechnie and given a special European kick this year, celebrated with a juggling homage to Freddie Mercury (alas, I arrived too late for this) and an Indian dance company. The opening night back in early July was a hoot: a party in a splendid NT space which including juggling tangoistas preceded by a weird experimental-dance number from inmates in pyjamas, Tango Sumo. Here they are sugaring the rather bitter pill of their unsettling show with stardust. Please note the European Commission logo: 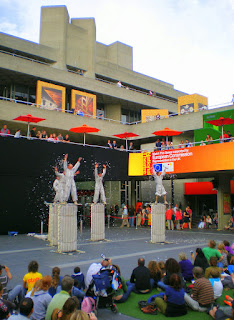 Saturday was a brighter day, with the world out and about on the South Bank - there is now a wonderful bar set-up outside the Festival Hall where you can perch on a chair and watch allsorts go by beneath. Alas, this serenity didn't last, and it was in torrential rain that I made my way to the classiest Verdi Requiem I've ever heard at the Proms on Sunday evening. More about that, maybe, anon: I'm happy for now just to enjoy the afterglow.
Posted by David at 16:00