And did those feet... 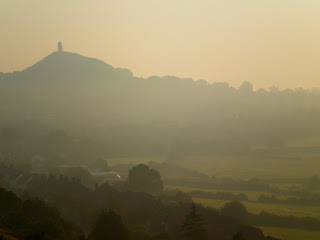 Blake's vision of a new Jerusalem was, it's generally accepted, founded on the legend of Joseph of Arimathea coming to Glastonbury with nephew Jesus on a tin-trading expedition. My Glastonbury friend, whose illness was the reason for what turned out ultimately to be an anything but depressing visit, has also read that the 'dark Satanic mills' might be a reference to the tanning factories on the other side of town, though of course the Industrial Revolution was way in the future when Blake wrote his poem.

Anyway, these feet and those of our mutual friend Eleanor eventually, after six hours' driving hindered by the thickets around Bristol, got to tread the ruins of the Abbey, ruthlessly laid waste (and its Abbot, Richard Whiting, executed and dismembered on Glastonbury Tor) by Henry VIII. Its form was difficult to grasp, and Pevsner was little help in this. I understand from a clear and beautifully illustrated booklet on Glastonbury, published with love as part of a series by the town's Wooden Books Ltd and written by George Wingfield, that St Mary's Chapel which later constituted the west end of the longest ecclesiastical building in Britain was completed in 1186 on the site of Joseph's wattle church. 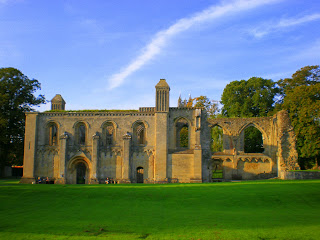 Even more spectacular, iconic even, are the two ruined towers of the Abbey's north and south transepts, standing out against a clear blue sky. Here are a view from the east end of St Mary's Chapel and (closer) the richest, the north tower. 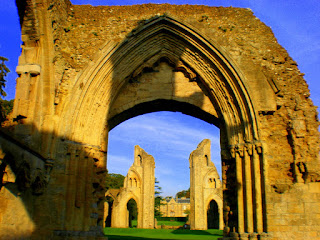 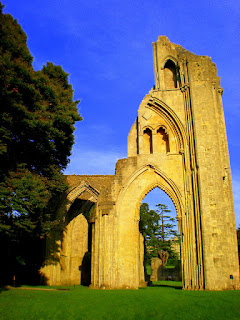 The whole complex is built on a special axis with the Tor, seen through Sunday morning mists in the first picture. Here it is with its attendant church as represented in a (1920s) window of the parish church, St John's...


...and here is the late 13th century tower of St. Michael at closer quarters: 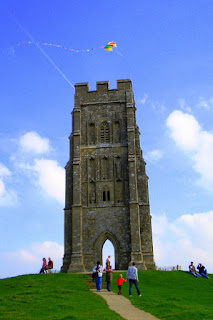 Legend also tells us that Joseph returned years after the Crucifixion - in 63 AD, there's precise for you - and planted his staff on Wearyall Hill to the west of the Tor, whereupon it burst into leaf. Here's the putative, be-ribboned hawthorn: 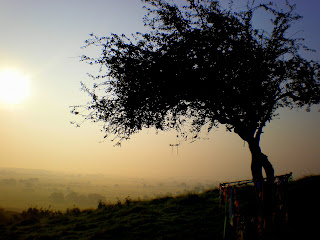 Our Glastonbury experience was, apparently, typically extreme. By the end of a tiring Saturday, Eleanor and I were mildly hysterical about some of the folk who come to nibble on the spiritual smorgasbord served up here - the bad clothes, bad food, bad art and so on. On Sunday, everything turned round, mostly due to our uncanny experience in what would seem to be the only really good cafe in town. We discovered it through the serendipity of the alternative B&B we were staying in not providing any coffee (an aggressive act, I felt). What happened at the Lalune I feel is too private to go into detail about here, and the more I talk about it, the sillier some people find it; but we did - Nell, Eleanor and I - all three experience in very different ways the extraordinary power of a goat-headed hazelwood stick wielded by a transsexual shaman called, I think, Siobhan. She never foisted herself on us, and spoke simply and intelligently so that nothing I heard seemed incredible or phoney at the time. While the ladies listened to the shaman's even more outlandish history, I went off to look at St. John's, briefly open after communion, with the light making its way through clouds of incense smoke: 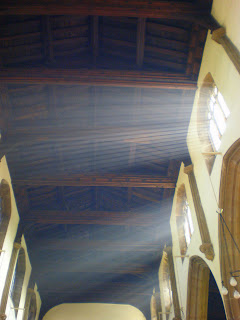 Then I went walking up the Tor with Nell's husband Geoff and dogs of character Molly and Minty. What's for sure is that after that strange meeting, all the stresses and the negative aspects of the weekend fell away and we whizzed back to London in double-quick time.
Posted by David at 17:40