Phew, What a Scorcher!


Or: My Night with Sex Beast, by Top Totty Anna. Well, it happened last night: readers of the Murdoch tabloid The Sun took advantage of the Royal Opera's special offer for Zambello's showbiz production of Don Giovanni, and I hope they had a blazing good time. A different one, certainly, from the kind you might have experienced at New York's Metropolitan Opera in the 1940s, as wryly snapped by that genius Weegee in 'The Critic' (I was reminded of this in a thread on La Cieca's brilliant parterre.com, and we both decided to use it around the same time): 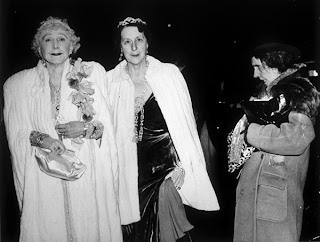 This Sun-at-the-Opera business has, however, occasioned more fuss even than the nonsensical Norrington non-vibrato at the Proms (wot? I hear you Sun readers ask). All to our amusement, I might add: the BBC Music Magazine reports The Sun's response to outraged Charlotte Higgins of The Guardian: 'Blow them. They can have a night in with their mung bean sandwiches and discuss existentialist feminism. We'll be down the opera having a knees up'.

Meanwhile, on the BBC Radio 3 Messageboards, one Reiner Torheit - an ex-ENO staff member based in Moscow, we gather - comes up with a wide range of headings for sundry operas, of which I include a few:
The Cunning Little Vixen - "Hop Off, You Frogs!"
Lady Macbeth of Mtsensk - "Freddie Starr ate my mushrooms!"
Siegfried - "Volsung ejected from Big Brother House"
La fille du regiment - "Girl in care billetted with thirty Frog squaddies"
La traviata - "Toff's totty coughs up at last"
La Boheme - "Hop Off, You Frogs!"
Peter Grimes - "Local Man in Copycat Canoe Death Mystery"
Tosca - "When will this knifing spree end?"
Les mamelles de Tiresias - Phwoaaaaaaaar!!! (see p3)

Other contributors were quick to point out that Platee and L'enfant et les sortileges were also up for "Hop Off, You Frogs!" Later one Burning Doge came up with a good headline: 'I SHOULD CIO-CIO! "Nippon back over 'ere!" says snubbed seaman's sexbomb' (OK, OK, you pedants, that should be 'seaman's snubbed sexbomb'). This one could run and run.
Posted by David at 10:13