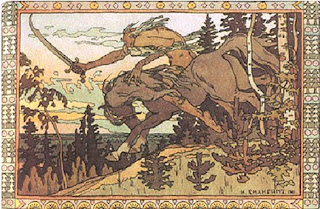 The legendary screaming skull – not to be confused with a recently deceased conductor – has a fair bit of mileage in Russia’s most magic-minded scores. I never thought I’d see the day when the ogre's two chief appearances coincided, but such is the persuasive force of the charismatic Vladimir Jurowski that on Friday at the Proms Rimsky-Korsakov’s miraculously concise one-act opera Kashchey the Immortal preceded Stravinsky’s complete Firebird ballet, the last big fling of the folk-tale fantastical. You can read more about the folk-tale background and the music in my Proms notes on Kashchey the Immortal and The Firebird.

I should admit that I’d been slightly apprehensive about the circumstances. This was the State Visit of the Maternal to the Proms, and I feared she might fidget in bits of Kashchey and the first half of The Firebird – after all, there are usually what even the most partisan among us might call longueurs. Not so in Jurowski’s spellbinding interpretations, nor was dear mama anything but gripped throughout, and virtually on the edge of her seat. Prepared, as ever, to the ultimate degree, Jurowski had in any case picked such a dazzling team of Russian singers for the opera and conjured the most bewitching sounds in the ballet that there were no grey areas. In terms of the tone-quality, I’d go so far as to say that I’ve never heard a conductor or an orchestra (the London Philharmonic Orchestra, now sounding like no other) project the individual timbres of the instruments so sharply into the chasms of the Albert Hall. Rimsky’s magic orchestral carpet, and its strikingly differentiated sonorities, complemented some of the most lustrous singing the Albert Hall will ever have heard (and that only a week after the dream combination of Urmana and De Young in the most hallowed portions of the Verdi Requiem). It was Straussian-soaring Tatyana Monogarova’s bad luck to be a mere sweet princess to the doughtiness and allure of that rare bird the true Russian contralto Elena Manistina – and in any case Kashcheyevna’s aria is always the highlight of a lyrically rich score. Voynarovsky, the comic-grotesque Kashchey, we know and adore from the Glyndebourne Betrothal in a Monastery – he can convey so much character and comedy with such economy. And it was a luxury to have a professional (quasi) opera chorus in the BBC Singers.

In The Firebird the orchestral principals took over the gallery of supernatural characters. I’ve never heard piccolo phrasing of such crystalline precision as Stuart McIlwham's, and that was only the tip of the iceberg. Getting virtually inaudible pianissimos in the velvety acoustics of the Albert Hall has been quite a speciality this year, but Jurowski staked all on the tremolos of anticipation as Kashchey’s magical kingdom vanishes and day breaks. If only the audience could have been complicit in the silences earlier, as they so impressively had been in the Verdi Requiem the previous Sunday.

There was an even stranger disjunction at the Royal Academy on Saturday morning: the world has now come to Vilhelm Hammershoi, that spare Danish lover of limited palette and dark interiors, so a day before closing you could seldom get close to the walls and floorboards of Strandgade 30, the Copenhagen apartment which looms largest in his artistic output. Yet somehow one could forget one’s colourful neighbours and feel lost in the often depopulated spaces of his pictures. Midway through the exhibition I did wonder why Waldemar Januzsczak in his article in The Times had felt so depressed and demoralised by the Hammershoi ethos – why, I thought, equate any moral failings you might perceive with the actual quality of the art? In any case, the things in the Strandgade rooms – a dish of butter, a coffee-cup, a stove, a punchbowl – seemed to have more of a mysterious life of their own than Mme. Hammershoi, usually seen from behind.


Yet in the last two rooms I did feel oppressed, like Januzsczak, by the empty streets and spaces, with a delicious frisson of horror at Hammershoi's claustrophobic vision of a baroque great hall (Lindegarden). A limited vision, then, but one explored to the full and – until the later years – shot through with strange optimisms and shafts of light.
Posted by David at 18:14