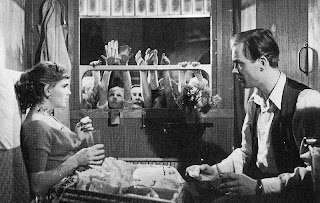 This week, in the relative calm before the start of the adult-education year and the concert season, I've been catching up on movies, courtesy of LoveFilm. The trainspotting comes about because I've been ticking off the Ingmar Bergman oeuvre over the years, and have recently been plugging the gaps of the early (1940s) period. The four I'd missed until now were the first film Bergman both scripted and filmed, Crisis, his most characteristic and overwrought early work Prison, the often annoying but undeniably cinematic Thirst or Three Strange Loves (with Eva Henning and Birger Malmsten, seen above in a neurasthenic postwar train journey from Basel to Stockholm) and To Joy, easily the warmest if most sentimental of the batch. 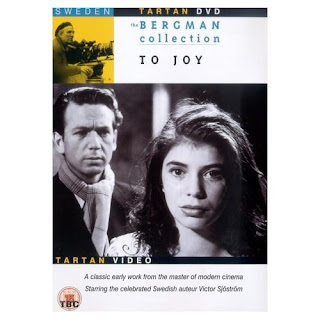 Bergman's use of music in his films is usually very telling, and becomes increasingly leaner in the masterpieces of the 1960s. Music dominates To Joy, because both the anti-hero and the all-too pliable heroine, despatched near the start of the film in a paraffin explosion, play in an orchestra conducted by that great ex-silent actor and director Victor Sjostrom of Wild Strawberries fame. The work at the start and end of the film, framing long flashbacks, is Beethoven's Ninth, and of course it's a bit corny when the protagonist, devastated by his loss, becomes one with the rest of the orchestra and the couple's little boy wanders in to sit and listen. Otherwise, there's a lovely use of Mozart chamber music for the only happy moments of the relationship, and a very well-observed scene in which our hero attempts to play the Mendelssohn Violin Concerto and goes perceptibly but not exaggeratedly out of tune, scuppering his potential career as a soloist. There are lovely performances from the luminous Maj-Britt Nilsson and Stig Olin as the Bergman alter ego.

Olin died this June at the grand age of 87 (same as Eva Dahlbeck, the adorable Desiree in Smiles of a Summer Night, who died in March). It says so much for the vitality of Bergman characters that he remained, for me, at the age one sees him in these 1940s films. He's certainly the most interesting thing about Crisis, in which he plays a mixed-up gigolo bent on destroying the innocence of a small-town girl (Inga Landgre). 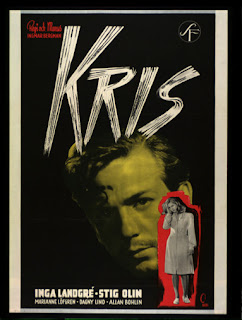 There's a lot of sub-Sirkian women's melodrama about this film, with soupy music to boot, but it's magnificently employed in the edgy seduction scene, which takes place to the distant thud of reiterated chords from the theatre next door to the beauty salon in which the seduction takes place. Olin is also a scoundrel in Prison, cowardly pimp to a teenage prostitute rivetingly played by Doris Svedlund.

Well, that leaves just a few more Bergmans I haven't seen (Journey into Autumn, with the dream pair of Harriet Andersson and Eva Dahlbeck, and the TV series Face to Face, which sounds fairly gruelling). I garnered most of them at the two big retrospectives - at the Barbican in 1992, as part of the Tender is the North festival, and at the National Film Theatre in 2003. Both were great journies of discovery, and it was exciting to see the NFT screenings get fuller and fuller, until there were queues for returns when it came to classics like Persona and Winter Light. On which latter subject, I also read The Director, a short but atmospheric novel by Alexander Ahndoril about Bergman's struggles with his past while making Winter Light, central to which of course were his father's role as a pastor and the crisis he might have undergone had he followed in his footsteps. 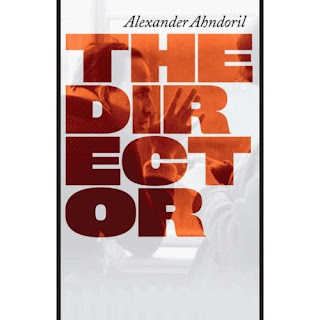 Ahndoril is especially good at catching the dreamlike visions which keep breaking across Bergman's everyday life - a true reflection, one gathers from what the great man says in his autobiographical writings.

After the Bergman stint, we found the silliness of a recent French costume drama, Moliere, unwatchable after twenty minutes and reverted to the drama of great film-making in the 1950s and 60s. First we watched Fellini's I Vitelloni, about the pathos and aimlessness of unemployed small town lads - not as racy as the scam-story Il Bidone, but the desultory quality is part of the point. Last night, as consort is a great fan of the Czech writer Bohuslav Hrabal, came Closely Observed Trains, a meticulously faithful adaptation (by Hrabal and director Jiri Menzel) of the novel with a classic scene in which a sex-mad signalman franks his girlfriend along the legs and on the buttocks, 'with hilarious results' as the cliche goes. This is a masterpiece of subdued acting, and unbelievably frank (in the other sense, of course) for 'Czechia' in 1966.

Much more upbeat, finally, is the earlier of the documentaries about the Venezuelan Sistema (for news on the later one and Dudamel, see two entries earlier). Mark Newbanks of Askonas Holt kindly sent this one, Tocar y Luchar ('To Play and To Fight', the Sistema motto), when I raved about The Promise of Music, and he's right that it gets closer to the essence of the vision: if the latter occasioned tears in the eyes, this one could be measured by the bucketful. 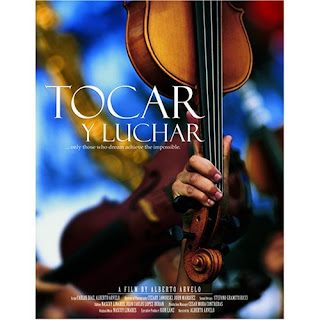 We watch Domingo weeping at a mass 'Hallelujah Chorus', see Abbado ever-vigilant but clearly moved at a performance by disabled children and conducting the Simon Bolivars in top-notch Mahler and Tchaikovsky. We have slightly more self-conscious praise from Rattle, and go from young kids reflecting on the philosophy of playing together to the founding genius, Jose Antonio Abreu, and the first players all musing on what decades of the Sistema have meant. Not only every schoolchild in this country, but also every parent and above all every politician, should see this film.

PS (29/9) I must just add what my Argentinian friend Sylvia had to say about this. She watched Tocar y Luchar with one of her sons, and they both wept. She wants copies for all her friends. But she pointed out that Venezualans speak 'bullshit - God, flowers, sun', and yet in this case the 'bullshit' led to results, and she really wanted to know how. I love this from the hilarious Sylvia: all Latins speak bullshit except for the Cubans, maybe because of their education, and the Argentinians ('they don't speak bullshit but they lie'). Discuss.
Posted by David at 10:31