A farewell and a mini-scandal


I like to think that Vernon Handley, who died yesterday at the age of 77, might have enjoyed this heaven's-eye view of last night's Prom (another from Chris Christodoulou's excellent BBC stable of snaps). It was uncanny how well the programme served as a tribute to him: in preparation, I'd been listening to his recording of Vaughan Williams's Sinfonia Antartica, and while Martyn Brabbins and the BBC Symphony Orchestra made an even more sombre job of impassive nature (no funny flopping penguins in this interpretation), it was neither conductor's fault if the work doesn't hang together as a symphony. At best a suite of filmic snippets which do at least sustain a certain icy mood - and the opening, dominating theme is magnificent - it all sits much more happily in the straightforward, well-told story that is Scott of the Antarctic (Ealing Studios, Charles Frend creating plausible frozen wastes). That I found very moving when I saw it earlier this year. In fact, music plays an even bigger part there than VW's score reveals: the entertainments which the explorers use to celebrate Christmas on board ship provide a nice divertissement in the middle of the film. 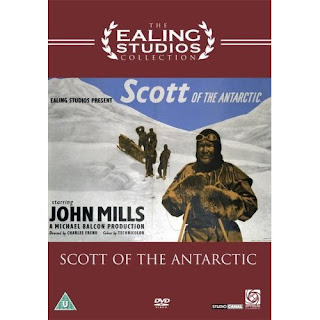 What to say, briefly, about our late maestro Vernon (I hesitate to call him by his nickname of 'Tod' which always seemed curiously fate-freighted - 'Ist dies etwa' der Tod?' - though apparently it was a childhood sobriquet derived from the way he used to 'toddle')? He's left such a noble and handsome discography behind. I must admit I didn't care to follow him into all the stagnant backwaters of British music - though such hilarious baggy monsters as Bantock's Hebridean Symphony remain in my cabinet of curiosities (poor old Gran, as Elgar said). Even so, I don't suppose I'll ever hear Howells' Hymnus Paradisi in concert again, as I did in Guildford Cathedral when Handley was the humble head of that town's excellent orchestra. As I mentioned in an earlier entry, his Job as well as his VW Fourth were beacons for the Royal Philharmonic when it was going through a rough patch. My favourite recording of his is Elgar's Falstaff, alternately sumptuous and tender. Obits to date have appeared in The Times, The Daily Telegraph and The Independent.

Brabbins seems to be another man whose talents aren't fully appreciated: surely he should have been up for the BBCSO Principal job? He's a great trainer, as I discovered from my all-too-brief participation in the Orkney Conducting Course (no, as we've purposefully left our telly reception up the spout, I haven't been watching 'Maestro', but I know from the BBC Music Magazine article that the sensations many of the celebrities had that the music was coming out much slower than they thought they were conducting it were very much mine in tackling the slow movement of Beethoven 2). At any rate, Martyn turned in a distinctive Planets , 'Mars' crackling from the start and 'Mercury' so delicate (Liz Burley did very artistic things with the difficult celesta part). It's always an Albert Hall treat to hear the ladies' voices up in the gallery at the end, vanishing into nothingness.

This was also my Last Night of the Proms, and a better tribute to Roger Wright's programming there could not have been. It was something of a celestial marathon: not only did we have the two British musings on the metaphysical, but between intervals a percussion sextet made up of the very appealing O Duo and former BBC Young Musician of the Year Adrian Spillett's 4-Mality thrashed away at Pleiades, Xenakis's now-classic score from 1979 (you can't say the programming was prescient when this concert was carved in stone; the coincidence with the launch of the Big Bang machine under the Alps was pure serendipity). Here they are dominating an Arena full of ear-plugged Prommers (another photo by Chris Christodoulou). I was spellbound by every second of this forty-minute Happening. One sad man decided to boo minutes into the first sequence, and then people started leaving in droves, both young and old. I can understand aural sensitivities; 'Metaux' has each of the six players attacking a 'sixxen' made up of nineteen metal plates. But you could only reel at the precision and range of the playing. My ears, at any rate, survived intact, and my very liberal minded friend Edward, a youthful 80, encouraged me to join him in a standing ovation.

That's it, then: 12 Proms for me, each containing various wonders, and only two major disappointments - Yakov Kreizberg's unfathomable Dvorak Sixth and Stephen Hough's bad night with the 'Rach Two' (clearly the near-collapses at the start of the finale were unlucky, but why set such an unrelenting tempo in the first place?) The BBC World Service had chosen wisely, as it turned out that night, to take only Stephane Deneve's Roussel Bacchus et Ariane Suite No. 2 and a coasting, effortless-seeming La Mer. I was in the box commenting with the ever-enthusiastic Mark Lowther, and we were lucky to have good performances to rave about (I believe the edited programme is being broadcast on the World Service this Saturday night, UK time). It's a bit of a snag for the presenters that they still feel obliged to gush even if the playing or the work isn't up to scratch. I couldn't have done that for unfortuate Stephen's Rachmaninov, but as it turned out I didn't have to.

Otherwise, highlights of my necessarily limited season? The sound of the LPO under Jurowski in Rimsky and Stravinsky, with Petrenko and the RLPO in the Rachmaninov Symphonic Dances a close second; the intimate sheen of Volkov's Beethoven Sixth, very surprising; the hallowed silences for the Dies Irae sequence of Belohlavek's Verdi Requiem; and first-time pleasures - VW Piano Concerto and Ninth Symphony, Thea Musgrave's Rainbow, and now of course the Xenakis. I wouldn't put Anders Hillborg's Peacock Tales on the same level, but with clarinettist Martin Frost exercising his parallel talents as a mime artist, it was good theatre (this and the next photograph again courtesy of BBC/Chris Christodoulou):


Oddly the BBC didn't televise this Prom. It also boasted, of course, puppylicious conductor of the moment Gustavo Dudamel, and reinforced what a disciplined, careful master he already is, pulling out the stops only when all hell needed to be let loose in the Symphonie fantastique.


That Prom also reminded me of happy days with the Gothenburgers and Neeme, especially when Dudamel gave his own very slow and idiosyncratic reading of their favourite encore, the Interlude from Stenhammar's The Song. Cha-cha-ing brass in the second encore have become a Dudamel trademark, of course, and the gentleman sitting next to me didn't like it at all. But, yes, young Gustavo is a force for the good, and what's taking place in Venezuela is definitely as Rattle described it, the most important thing happening in the musical world today. I succumbed to Dudamel's incredible charisma in a phone interview as I was preparing a note for the Simon Bolivar Youth Orchestra's forthcoming disc of Tchaikovsky Five and Francesca da Rimini. I was impressed by the spontaneous directions in which he led the conversation and by the way he stressed the Venezualans' indebtedness to 'Maestro' Jose Antonio Abreu, the founding father of the Sistema which takes kids off the streets and gives each an instrument. Every schoolchild in this country should be given the opportunity to watch the DVD about the Sistema and the Simon Bolivar's Beethoven Eroica in Bonn. 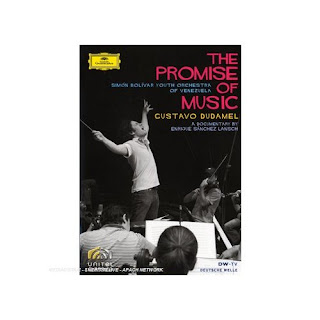 I defy anyone not to be moved to tears by this. Maybe the message is becoming swamped a bit by the media circus, but it remains the same and the essentials of human communication in music have never been spelled out more vividly. Dudamel ends the documentary by saying very simply: 'When every child has access to culture, the world will be a more mature and sensitive place'. It sounds like something out of The Magic Flute, but why not?

PS (12/8): It seems my feelings about the phone chat were reciprocated. Now this is going to seem like the most outrageous piece of personal trumpet-blowing, but other musical bloggers do it so much more often, and in any case why not admit to a little glow of pride? It's always nice to hear good news. Anyway, Mark Newbanks of Askonas Holt e-mailed me today and wrote: 'Gustavo asked me to tell you that he loved the text you wrote for DGG. When I saw him in Berlin, he added that he seldom encounters a journalist who asks such good questions, contributed so well to the dialogue and was also able to turn it into something "so beautifully written as an end product". So, congrats.' Nice to know. What makes me even happier is that, as Mark later added, Abreu was looking over Dudamel's shoulder and agreed. Well, what's sincerely done is sincerely received.

So, on with the new season, which will see the long-overdue return of the Simon Bolivars to London - and on, too, with (a phrase I no longer hesitate to use) London's new Golden Age. With Jurowski heading a dazzling LPO season embracing an unorthodox celebration of Tchaikovsky, his contemporaries and his successors - see the Southbank Centre’s ‘Revealing Tchaikovsky’ webpages which link to my introductory article - Esa-Pekka signing in at the Philharmonia, Belohlavek consolidating old-mastery at the BBCSO and Gergiev providing challenging programmes at the LSO (albeit with some egg on his far from curate-like face, as many of us now feel), we can't go far wrong. The Proms have proved that the regional orchestras are all in fine fettle, and of course in the opera world we have ever-collegial Antonio Pappano at Covent Garden and young Ed Gardner facing an unusual season at ENO. Yes, we've never had it so good. If only the sell-out phenomenon and all-ages crowds of the Proms can be maintained at the Barbican and on the South Bank. I do believe we're getting there, but instrument-learning and what is now a virtually non-existent music appreciation set-up in schools still have a long way to go to ensure the audiences of the future.
Posted by David at 12:29