A hymn to Lynn 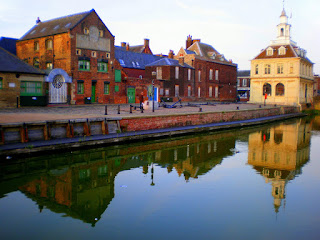 King's Lynn, that end-of-the-line Sleeping Beauty by the Wash, never made much of an impact on me before. It used to be a picking-up and dropping-off point on route to Burnham Thorpe, our base for five previous walks this time every year in support of the Norfolk Churches Trust.

This weekend, I saw the light. Our friend Jill's circumstances now find her ensconced very comfortably in the Benedictine Priory by St Margaret's Church, the heart of old Lynn, handsomely converted by the King's Lynn Preservation Trust. It's on the other side of the church from this view, taken from the chessboard facade of the Trinity Guildhall looking across to St Margaret's west front. 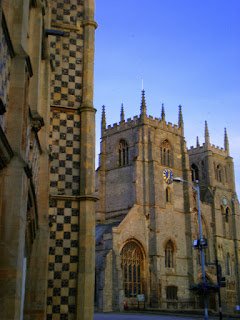 Saturday morning greeted us with mists and dew on the cobwebs in the Priory:


Usually we strike out into the depths of Norfolk and collect our churches between country miles. This time there was much in Lynn to tick off the list, including one of the richest and most beautiful medieval buildings in the country, St Nicholas - a mere chapel of ease to St Margaret and usually open only on the seeking of a key. Because of European Heritage Weekend, however, the doors beneath the huge west window were flung open. For those of you who've put cheques in the post, your money goes to preserve splendours like this angel roof, one of many in East Anglia... 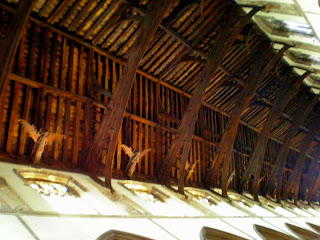 ...and this colourful 1675 tomb to Sir Thomas Greene and his wife:


St Margaret's is less of a piece - the nave had to be replaced in the 1740s, at a time when neo-Gothic was hardly the order of the day - but contains the two largest and most elaborate brasses in the country, with Robert Braunche's peacock banquet for Edward III illustrated at the feet of the gentleman and his two wives, and splendid misericords like this one:


The other religious buildings in Lynn are a real mixture, including a Quaker Meeting House in an old pub and crumbling, soon-to-be-restored All Saints now in the midst of a housing estate, but another treasure and recently much-publicised symbol of the town is the leaning octagon tower of Greyfriars.


After this we headed out to clock up our miles. South Wootton surprised us with a Norman font, monster faces at each corner... 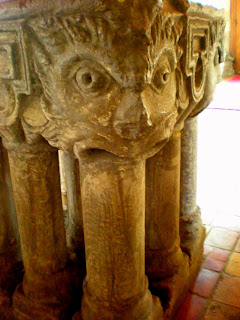 ...while another Norman font at St Lawrence Castle Rising has a striking lady's head carved on a corner of the rim: 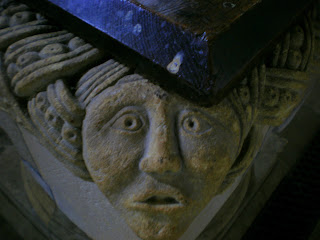 Just to give a taste of the open air, here's the longest stretch we walked, along the River Babingley from Castle Rising to West Newton... 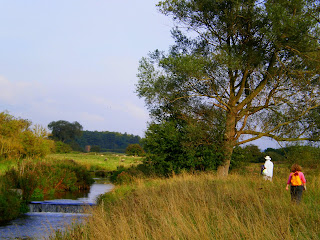 ...after which it was all Edwardiana-and-later around the Sandringham Estate. The refreshment-givers and form-signers at St Peter and St Paul had all gone off to Evensong at Norwich Cathedral, but we were happy to be greeted by this handsome St George in a memorial window to the local fallen of the First World War. 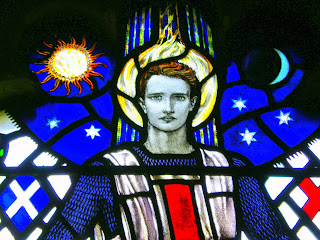 Then, 14 miles and 17 churches later, it was a case of hitting Sandringham for Sandringham's sake at 6.10 before catching the last bus back to Lynn, baths and steaks.

I hesitate to overdo the history-ramble with more on Lynn, but as Sunday was the town's special heritage open day, I think a few more shots, this time of the profane as well as the sacred, might not be taken amiss. Let's start with a full-frontal view of the Trinity Guildhall.


We were curious as non-celebrants to observe the morning service in St Margaret's, and found ourselves rewarded by a jolly and intelligible preacher, Curate Christopher Wood; by a humble choir of local teachers doing a perfectly nice job on Bruckner's 'Locus iste'; and by a first-class organist clearly drawn to the famous instrument installed in 1754 at Charles Burney's behest. Then we watched a cannon being fired by Cavaliers on the harbour, nosed around the enormous wine-storing undercrofts beneath Bank House, admired Norman brickwork in a solicitor's on King Street, were admitted to the 1729 Masonic Temple around which the hotel rooms of the Duke's Head have had to be accommodated (photography welcome; how times change!)...


...and enjoyed a vivid, enthusiastic lecture on the Hanseatic League and Lynn's vital part in it by local historian Paul Richards. This is the 'oversailing' upper floor of the Hansa Warehouse in which the talk took place.


Finally, we joined all sorts of jolly locals in an hour-long queue to see inside the bizarre Red Mount Chapel, built in 1485 as a wayside shrine for pilgrims to Walsingham, and the wait was worth it to see the fan vaulting of the Upper Chapel.


So, what will happen to Lynn? It's such a cuspal place, full of gems and unusual townhouses (as well as some of the friendliest folk in Britain), and yet it hasn't quite made the grade nor (hurrah) hit the tourist trail, perhaps because it's not really on the way to anywhere. The Festival needs to be revitalised with themes that will draw crowds from London and elsewhere, but at the moment there aren't enough of the appropriate lodgings or gourmet restaurants for that. Yet the Cambridge effect could spread northwards beyond Ely. And all this is less than two hours from King's Cross by train.
Posted by David at 14:21