Should I, Rakewell-like, bewail my return to the Great Grey Babylon after ten glorious days in the country, where as usual at this time of year we have been looking after a big house above Ledbury, Herefordshire? In the past, it always unsettled me, having had the run of all that space and the company of the family dogs; one year, the only thing to lift my melancholy was the best-ever Shakespeare of the Globe's all-male Twelfth Night.

This year, quite apart from the whirl of this unusually charge-around summer, adjustment was easy. From Paddington Station, I simply walked across the Hyde Park/Kensington Gardens divide, met two Prommer friends by the Serpentine, marvelled briefly at the now completed and up-and running Gehry pavilion (more of that in the next blog entry, the reasons for which will become apparent): 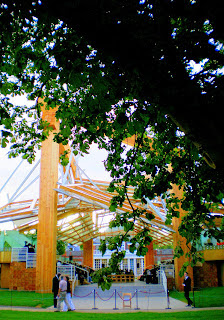 and then headed towards the Albert Memorial and the Royal Albert Hall in the lovely evening light. 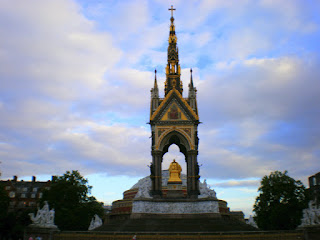 My first Prom this year certainly made me eager for the rest (sometimes I feel bad-tempered about the audience, the acoustics, the whole Albert Hall experience). Once past a completely disposable world premiere, Kenneth Hesketh's Graven Image, sans bold ideas, interesting orchestral combinations, obvious structural strengths, you name it, it lacked it, the rest was first-class. I wanted to hear Paul Lewis live because I've found some of his Beethoven cool on CD, but this Fourth Piano Concerto made one sure that a certain detachment is what he wants. The piano sounded clear and unorthodox in that space, the phrasing thoughtful, the interplay with Petrenko's equally light and buoyant Royal Liverpool Philharmonic impeccable. Rachmaninov's Symphonic Dances were really what I'd come to hear, as again I've not experienced Petrenko in the flesh, so to speak. He is a master, sure of rhythm, rubato, nuance and emotional depth in this curiously haunting swansong. It might be the knowledge of what's behind it, but the last-minute progress of the Vespers' 'Alleluias' brought tears to my eyes as surely as the rhapsody at the heart of the first dance (what genius to match a sax with only one other woodwind instrument at a time; Hesketh et al, take note).

When I played it again the next morning - Neeme Jarvi's performance, once my Building a Library choice on Radio 3, but I'm not sure that if Petrenko and the RLPO recorded it now they wouldn't knock it off its pedestal - consort said this passage was like a walk in the woods above Ledbury. Indeed, like Elgar, I'm mad about that little Arcadia, the sweep between the Malverns and Ledbury. On one glorious weekend, the hottest of the year, when we mostly basked with our guests, the walking was almost too much even at seven in the evening. Here you see our two favourite dogs, the best of pals, panting atop the British camp with Little Malvern Priory and Worcestershire unfolding beneath them (the Herefordshire side from the Malverns, I have to say, is infinitely prettier, with its rolling wood-topped hills). 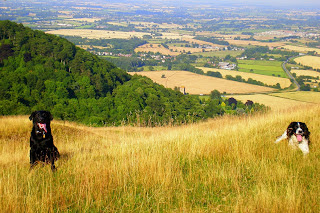 This is the view looking south, earthworks with sweaty walking friends (even up here there wasn't a breath of wind): 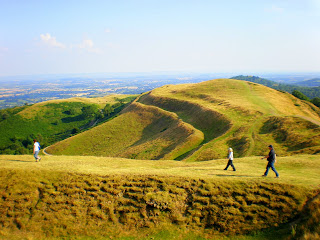 And here's the same hill from our neck of the woods. Elgar could see it from quite a different viewpoint as he worked on The Dream of Gerontius at Birchwood Lodge. 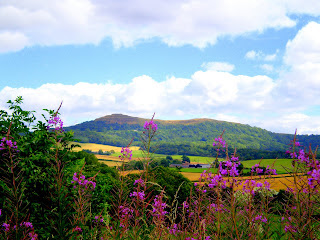 Had we stayed on this last weekend, we would have been hearing music of quite another sort as the Big Chill festival got under way. I was moderately curious to hear Leonard Cohen and see the artworks, but I couldn't contemplate the thought of more than a couple of hours dipping in and out. The Big Chill has grown from the year when friend Jill and I forced our way through on a public footpath, and found it all very low-key and amiable. Some say it is beginning to supersede the mudbath of Glastonbury.

Ledbury, meanwhile, showed little evidence of the punters on the Friday we left. Its half timber work is famous, especially in the street leading up to the church: 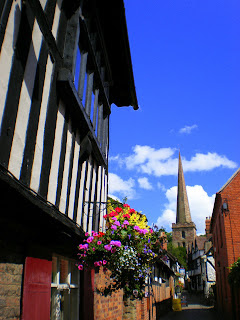 But there's also one newish building squeezed into one of the town's characteristic alleyways housing part of the wonderful Tinsmiths collection, and designed by Alex Clive. 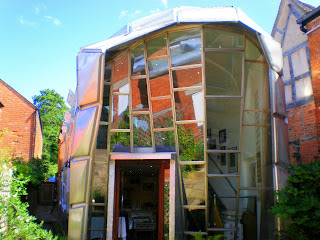 Tinsmiths opened our eyes this year to a fine artist in the Ravilious tradition, but no mere pasticheur, Mark Hearld. Originals are heading Londonwards soon, but in the meantime here's a print which shows why he would be the perfect illustrator for the original Cunning Little Vixen story by Tesnohlidek (high time we had a new English translation in the UK). 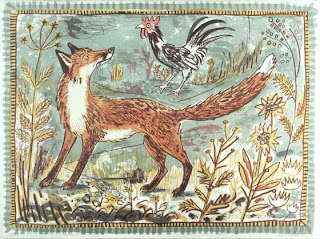 You can see more of Mark's work in the linked page of the splendid St Jude's Gallery, Aylsham, Norfolk.

Anyway, apart from being tempted by art in town, our time in Ledbury was as simple as ever: food, friends, walks, kitchen-garden tending and very little music or film (only a necessary revisiting of Sargent's G&S, which helped with the jolly mood, and one DVD, the hyper-romantic Atonement). Now, though, it's back to cultural overload as usual.
Posted by David at 16:42

I have fond memories of Ledbury and our stay there with you!
What great pics
love Sophiexx

And do you remember it was while climbing the British camp that you expounded on your dream of evening cocktails on the terrace of your hotel in - Kerala, I think was the dream then - and I bullyingly said, shut up and enjoy the view?

I hope you forgive me for that, and of course I remain gobsmacked with admiration that you more than realised your dream. Dscofferxxx