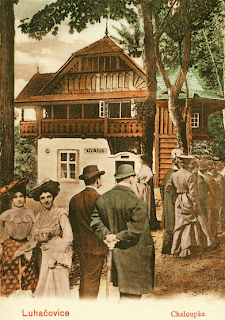 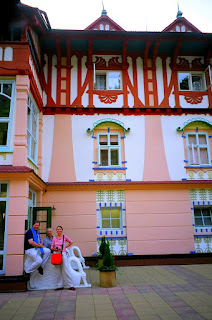 Last Thursday's Proms concert performance of Janacek's Osud brought back happy memories of the spa resort where its first act kicks off in sun-drenched merry-go-round brilliance. Mapped out as part of our Czechia motoring tour by our dear Viennese friends Tommi and Martha, Luhacovice (pronounced Luhatchovitse - sorry, I can't do accents on this facility) was our watering-stop between Brno and the Beskedy mountains en route to Janacek's home village of Hukvaldy last May (see the blog entry for October 2007 with the vixen badge-and-statue photos). You will see that not a great deal has changed in olde-worlde Luhacovice, though it is no longer for the fashion-conscious; all Czechs seem to enjoy the simple pleasures there. In the second picture ye foreign tourists are standing at the entrance to folly-architect Dusan Jurkovic's biggest number, complete with swans at the portal (it's now the top spa hotel). For good measure, here's another old postcard purchased there - making fun of Czechs trying to be stylish in the rain - and a wider sweep of the hotel in the central spa gardens as the less fashionable tourists walk away from it. 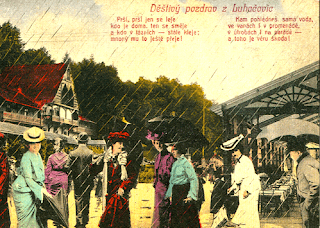 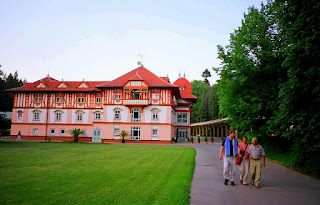 I suppose one could do a mobile performance of Osud, moving for Act Two to Janacek's little house behind the Organ School in Brno (the only problem being that there is no high balcony from which Mila's mother might hurl herself and her daughter)... 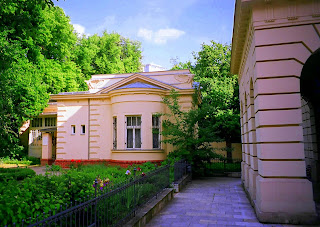 ...and for Act Three the demonstration of protagonist Zivny's unfinished opera could take place in the Organ School itself: 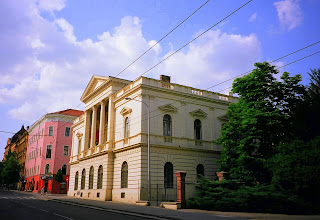 The Royal Albert Hall performance was beautifully shaped by Belohlavek, and luminously played by the BBC Symphony Orchestra so that the big emotions of Zivny's making-sense-of-life in the last act certainly developed. But there was a big problem, even knowing the libretto a little, in following this overwrought text with a programme on one's lap. Janacek, as always, goes for uncompromising music theatre, and the only solution is either to do it in English or make sure you have supertitles (and the Proms will have to get them for next year, I think). The singing was good, but Stefan Margita's idiosyncratic voice production and charisma couldn't eclipse memories of Philip Langridge in one of his greatest roles.

Meanwhile, from Janacek's piano in his little house behind Brno's Organ School... 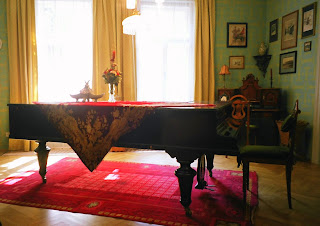 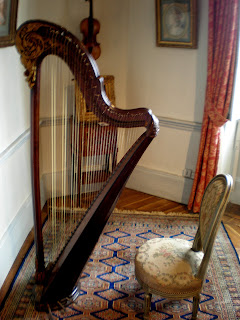 ...where two weekends ago we were liberally hosted by a genial chatelain. He shared with us his splendid outdoor pool and his cook, unlocked the doors to his artistic holiest of holies (which of course can't be enumerated) and drove us some distance to the prettiest towns bordering on Provence. I fell in love with Grignan, a walled gem which welcomes the Better Sort of Tourist thanks to its literary connection with the Marquise de Sevigne: note the quill on the old tower, as well as the roses of which the town makes such a fuss in its 'jardins botaniques de Grignan' trail. 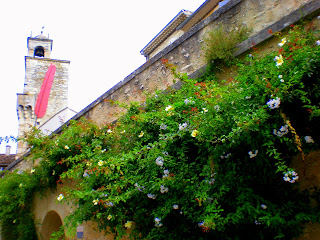 The chateau here, reconstructed in the 1930s, has an odd kind of dominance - from its terraces one has splendid views over the region, and it extends over the roof of the 16th century church, as you can see. 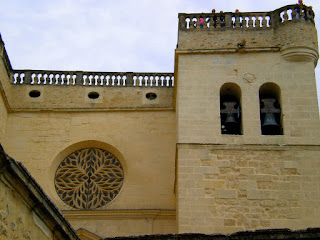 Vaison-la-Romaine is much more touristified, but then it has even more to see: Roman ruins and bridge leading to the medieval town... 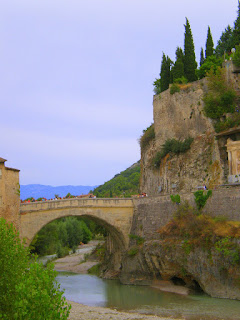 ...as well as an atmospheric romanesque church where we were lucky to catch France's National Youth Choir in rehearsal. The next morning we went to Solemn Mass at the monastery of Aiguebelle, set in a lush green valley. 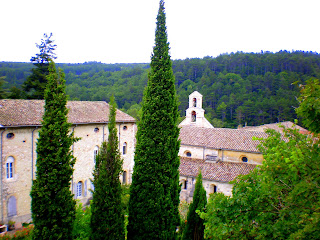 The monkish chanting was a wonderful background to thoughts holy and otherwise (by which I don't necessarily mean UNholy, just a tad profane). We had to tut 'dommage, dommage' as the woman in front and her granddaughter took out their mobile phones to photograph the proceedings, whereafter the teenager promptly and childishly slumped to sleep on granny's shoulder.

By Bank Holiday weekend, it was time to settle in at home a little, though I did go off to the National Youth Orchestra Prom so vividly conducted by Pappano - does this man ever do anything less than wholeheartedly? - and in which one could take the virtuosity of the under-20s for granted in a more than usually gripping and danceable performance of Varese's Ameriques. I heard Copland's Third live for the first time, and didn't much care for its flatulent attempts to live up to the Big Symphonies of Prokofiev and Shostakovich; but they did it superbly well - there was a great young oboist - and flew alongside the laid-back but inspired Berezovsky in that difficult beast the Rachmaninov Fourth Piano Concerto.

Sunday was our day out. First we had lunch at Mount Pleasant, a tranquil haven for writers and artists in Reigate where I met one of my great heroes, Bryan Magee, as courteous and curious in person as he is in print. Then we took our diplomatic friends Anneli and Niki to Charleston. Despite twice performing in the Quentin Follies, I've never been round the house, and I was not just charmed but dazzled by the Bloomsbury motto of 'if it's a surface, paint it'. There were some first-rate portraits by Duncan Grant, an uneven artist but at his best in the studies of Maynard Keynes and Lytton. And the guides were tactful and very well informed. I like the fact that they don't have 'keep off' signs on the fragile furniture, or cordons around it. Here's a photo of the studio, with Duncan Grant's Italian nude on the easel, taken by Pia Tryde (no photography otherwise permitted within the house). For further images and news, check out the Charleston website. 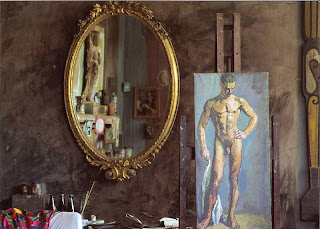 A sunny afternoon was heightened by tea with Olivier Bell, friend Cressida's mother and widow of Quentin, who lives nearby. I can't say how much my spirits soared when she told us that the diagnosis of brain cancer, which had prompted Cressida to encourage us to pay our last respects earlier in the year, had proved completely wrong (somehow we hadn't gathered this particular part of the message from Cressida, just imagined she was in some kind of remission). In fact, Olivier had had a stroke, and has completely regained the power of her speech. Her wit and wisdom are as sharp as ever - she complained at the cropping of the Keynes painting in the postcard I showed her - and she was tolerant of the battery of cameras portraying the gracious lady with each of us. I only ventured one at the end of our visit of Olivier in her favourite kitchen seat. 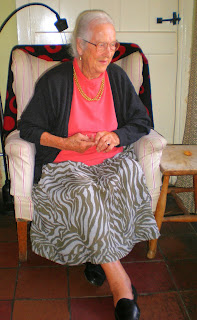 92, and still as strikingly attired as ever and as upright in her posture as when we first met her. Evviva Olivier - or, as I said, may she live as long as she wants to, and clearly she does very much want to at the moment.
Posted by David at 12:45