Back to the couch again 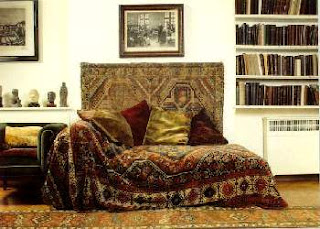 Twenty-two years have passed since I first arrived at the Freud Museum as a green, part-time educator, knowing next to nothing about mighty Sigmund but happy to be paid to learn while I got on with the real business of freelance writing. It was a very happy time of my life, even though I had not then attained my heart's desire (by his own choice, a more or less invisible presence here, despite two decades' eventful cohabitation). No matter how discombobulated I might feel, I'd always find myself centred after a few minutes standing in the great man's study - more or less untouched since daughter Anna preserved it as a shrine following his death in 1939, a year after he landed as a refugee in north London.

The house still has the same serene atmosphere since the year in which we, the 'primal horde' as the Museum's present director Michael Molnar so wittily put it, first took a myriad of interested visitors around the key rooms. Tommi and Martha were, of course, familiar with Berggasse 19, and wanted to see the couch, the books and the antiquities. I think they were suitably impressed - though less so by the temporary exhibition of new works by artist Oliver Clegg. Well, I rather liked the chess set mirroring the objects on a replica desk, swathed in the darkness of what used to be the orientation room. That's a replica of Freud's anthropomorphic chair in the background. 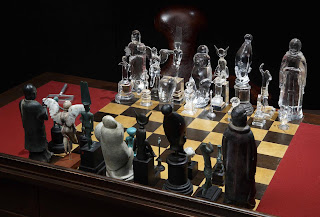 Sticking doggedly to the 'program' devised for our Viennesers, we rushed from Hampstead to the Barbican Pit and the raw energy of the Brazilian youth theatre Nos do Morro's Two Gentlemen of Verona. Quite apart from ticking this off the ever-dwindling list of previously unseen Shakespeares, I wanted to catch this 'fresh, raw and energetic' approach, as it was advertised. I wasn't disappointed. The musical interludes, graced by an especially soulful and watchable young guitarist, were enchanting as the ensemble told us what was going to happen next (even with this, Tommi and Martha were still a little confused). But the production was also alert to the admittedly flimsy drama's slide into potential tragedy and the acting was very disciplined, too, as far as I could tell from the Portuguese intonations, with charismatic performances from the gents - noble Valentine and slippery Proteus - and their ladies. Here's Onelia Sylvester in the middle of the photograph taken by Ellie Kurtz.


Then it was on to friendly, intimate Kipferl, coals to Newcastle for our friends, I know, but the nearest cafe to hand, and an ever-fascinating stroll to St Paul's, where Palestrina's Missa Papae Marcelli just happened to be the mass setting for Solemn Eucharist, radiantly sung by the cathedral choir. After a jolly supper chez nous with divobass Peter, culinary genius Florian, their friend Elmar and our diplodiva Anneli, the exhausted Austrians took an earlyish night to face the Sunday morning ordeals of Ryanair to Bratislava. Next time, unquestionably, they'll come to Heathrow with Austrian Airlines or BA.

Sunday might have been blissfully uneventful but for a revelatory piano recital in the evening - Lithuanian doyenne Muza Rubackyte in a colossal programme of Chopin Etudes, his B flat minor Sonata, curiously deep miniatures by national hero Ciurlionis and Prokofiev's Sixth Sonata as dessert. What's amazing about this woman is her effortless muscular control of the most complex music, keeping her distance from the torrents, for which in some cases - two of the Chopin Etudes, for instance - there seemed to be two different pianos at work, one in the cascading right hand, the other in the strong melody of the left. Another distinguished, more outwardly emotional pianist at the event found it cold, but I thought it just magnificently objective. True, there could have been a little more pathos in the valse lentissimo of the Prokofiev, but resonant austerity is Rubackyte's way, and I've never heard such structural control in the first movement. In the finale, she failed to hit the start of the final slog to her satisfaction, and seamlessly went back and repeated the previous three minutes so that, I guess, she could run at it afresh. And who would have noticed if they didn't know the work? Above all, though, I want to hear more of Rubackyte's Bach and Liszt.

At the Lithuanian reception afterwards to launch Vilnius as European Capital of Culture 2009, I was delighted to see one of the country's finest younger talents, Evelina Puzaite. I had the great pleasure of interviewing her last week, and found her vivaciously responsive to all sorts of disciplines outside the musical sphere. She was certainly in awe of the great lady's achievement, and wanted to go and ask her what instrument she was playing, since like me she couldn't believe the brilliance of the upper register. So this was an opportunity to snap them together. As you will no doubt have gathered, Evelina - whose own next Wigmore recital takes place on 4 January - is on the left and Muza on the right. 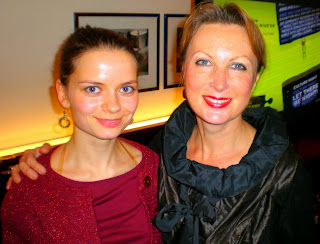