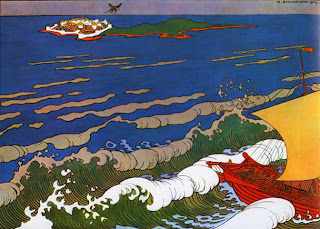 Very well, contrived it may be to try and link the surprises of Louis Malle's most mesmerising actresses with an educational visit from an unknown string quartet and a lavish rarity imported from St. Petersburg (based on designs by the great Bilibin, illustrated above with two more to follow), but this has indeed been a week of unpredictable events.

I can't think of a single friend who, when we boasted that we were going to have supper with Juliette Binoche, didn't react with generosity towards this very singular beauty. By way of preparation, I wanted to catch up with the Louis Malle film in which she starred with Jeremy Irons, Damage. I, too, was in this movie when they filmed it in London - happened to be walking up Villiers Street as the cameras were rolling. I didn't see myself in the end product, but never mind. What a horrid and unbelievable drama it is - script by David Hare about a messed-up girl who's been so traumatised by the suicide of her adored brother that she would appear to be recreating the crisis by having a sordid affair with the father of her fiancee. Well, La Binoche looks suitably enigmatic but seems as puzzled as the rest of the cast by some of the clunking lines she has to speak.

The point, anyway, is not to dwell on this but to hymn the wonders of an earlier Malle film which I'd never seen before, but which turns out to be as compelling as Lift to the Scaffold. Two-thirds of Les amants is mired in an acid comedy of manners, with the captivating Jeanne Moreau as an elegant, spoiled, bored housewife, leading as superficial a life in her affair with a Parisian as she is in her marriage to a provincial newspaper editor. Then, at a house-party as magical and life-changing as the one in Bergman's Smiles of a Summer Night, she falls into a dreamlike love-affair with the handsome and drole young man who's given her a lift when her car broke down. They walk bewitched through the grounds of the Dijon chateau while the solemn strains of the slow-movement variations from Brahms's Op. 18 String Sextet tell us that this is indeed a once-in-a-lifetime love. What consequences does it have for the marriage and child she leaves behind? We don't know, though subtle doubts are raised as the lovers drive away together the next morning.

Amazingly, the film was branded as pornographic and even caused a law-suit in Ohio. It's certainly very sensual, as in the scene where our Jeanne, wearing nothing but a pearl necklace, is being pleasured by her new lover. But the enchantment always gilds the lily. 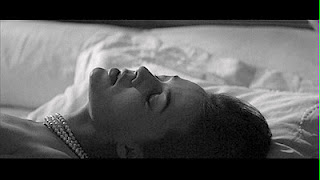 We anticipated being similarly spellbound by La Binoche on Monday evening. I wasn't expecting too much of her collaboration with choreographer-performer Akram Khan at the National's Lyttleton Theatre, in-i, and despite a certain admiration for the boundaries she'd pushed in the dance sequences, and the rather beautifully lit wall designed by Anish Kapoor, the show and above all its chunks of dialogue attempting to delineate the agonies and (ouch) the comedy of a new relationship between a man and woman of different cultures struck me as lumpy and pretentious. Our lady moved well, but not quite as supply as a real dancer would. Here she is as photographed by Tristram Kenton for the National. Several hours later, la belle Juliette swept in, exquisitely coiffured and attired, to the French ambassador's residence, where the crowd was larger than anticipated - though it was good to see so many theatrical luminaries there, and I was very happy to chat to Nick Kenyon and Graham Sheffield from the Barbican. Her speech was more alluring and spellbinding than the show, I have to say. Anyway, I was seated between a lawyer and a Portuguese writer, whose company I specially enjoyed (we can't read her novels as they haven't yet been translated, but the cover of the latest is designed by her good friend Paula Rego, there's a bit more namedropping for you). It was a bit odd to have both hammering away at the question of how I came to music and didn't I miss playing the oboe - I felt I was overpleading the active role of the listener and commentator. Anyway, good food and the surroundings of a few fine pictures and opulent tapestries meant that the late hours flew by.

The following evening, in the altogether less sumptuous surroundings of the Anglo-American Study Centre in Bloomsbury Square, my Inside the BBC Symphony Orchestra class enjoyed the supreme luxury of a performance and chat by the third quartet from the BBC Symphony Orchestra to visit us. Having already established excellent relations with the Helikons and a viola ensemble which promises to stretch to six or eight the next time they come to see us, we found our loyalties divided by the very personable and sophisticated Merchant Quartet - violinists Amyn Merchant and Ruth Schulten, viola-player Philip Hall and cellist Michael Atkinson. Stupidly, I didn't take along my camera, and this is the photo they sent me, which captures their smiliness, but they need to get some good publicity shots: 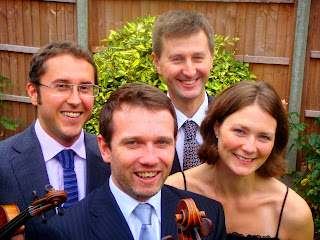 Between the expected Haydn 'Sunrise' Quartet and the completely unexpected first and third movements of the Ravel - it turned out we might have had it all had there not been so much talking - the players turned out to be all four of them eloquent speakers (by no means a given with orchestral players, and why should it be?) I learned a great deal about the relative values and insurance of old instruments and bows, a practical aspect I don't tend to cover. As usual, the students and I were in a mild state of bewilderment at having such first-rate performances given just for us in a small and overheated room. The duty secretary was even more breathless with amazement when I spoke to her at the end, and I'm not sure she'd heard a string quartet in action before. With BBCSO supremo Paul Hughes's visit at the beginning of term, as well as the second of the player visits and an introduction to Turkish week yet to come this term to complement the rest of my talks, we're doing rather well here. And the students this year, still with the core of adored regulars, are an especially vocal and inquisitive bunch.

Two of the students from my other City Lit (Opera in Focus) class, Gillian Frumkin and Naomi Honigsbaum, took me along to the final rehearsal of the Mariinsky's Rimsky-Korsakov Tale of Tsar Saltan at Sadler's Wells - for which I was very grateful as, due to the state visit of our beloved Viennesers Tommi and Martha, I couldn't make either evening performance. Now, I know these rehearsals - even one which ended an hour before curtain-up - shouldn't really be described, so I will only obliquely say that the familiar Russian sense of last-minute chaos would by no means pre-empt a perfect performance that evening. So what of the positive did I glean from this preview? Above all, that the gorgeous Bilibin designs really were his fairy-tale, skazki, illustrations brought to life, a wonder throughout, and especially wondrous when the high-point orchestral interludes were illustrated by CGI variations on his best known illustrations, like the Hokusai-inspired picture of the barrel in which the betrayed Tsarina and her fast-growing son are put to sea. 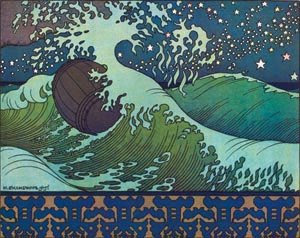 Even though the singers were, many of them, understandably marking, there was a known first-rate quantity from tenor Daniil Shtoda and another voluptuously beautiful young woman with a quality Slavonic-soprano sound (I'd better double-check which of the two singers it was at the final rehearsal). Tughan Sokhiev has come a long way from his singer-unfriendly, inexperienced youth at Welsh National Opera. He keeps the score buoyant, presumably fishes out more atmosphere for the interludes in performance and rehearses the choruses well; I was amused to hear the usual problems in what I guess, though I don't have a score here, to be yet another of those 11/8 numbers which so flabbergasted the young Prokofiev and his pal Morolev in The Snow Maiden and Sadko. Rimsky's score is jam-packed with fine inventions, but it must be obvious even in a livelier, more physical staging than this that it takes a good hour to reach the long-anticipated happy ending.

Still, lucky us to have this most important offering in Rimsky anniversary year. It does, however, beg a question which I never even dreamed of in the 1990s when Gergiev first served up these lavish World-of-Art-designed recreations: doesn't this all tie in too uncomfortably well with the neo-nationalist agenda of Putin's Russia? Is this why so much money is available for a lavish redesign, stupendously detailed costumes and all the CGI caboodle? Remember Rimsky was composing these increasingly formulaic, if well-imagined, fairy-tales for an ever more authoritarian tsarist regime (even if, of course, when pushed to it he sided with his reform-hungry St Petersburg Conservatory students in 1905). And now parallels are being drawn, not entirely implausibly, between Stalin's turn back to the 19th century classics in the late 1930s and the image of renascent Russia that Putin is trying to project. After Gergiev's behaviour in south Ossetia, we know that there is no such thing as a separation between music and politics. It doesn't diminish the artistic achievement here - in every sphere except the directorial, where the usual Mariinsky shambles on stage prevails - but it does leave a relatively new sour taste in the mouth. To remove it again, let's have another Bilibin image from his original illustrations to the Pushkin tale (which I'm lucky to have at home in several editions). Here the tsarevna and her fully-grown Gvidon look at the magical city on the island where they've just landed.